A first time for everything

Pakistan is unfortunately a country that is currently suffering from negative public perception concerning security and, therefore, faces serious issues in welcoming foreign visitors. Leather International explains how the Pakistan Mega Leather Show, held 6-8 March in the Lahore Expo Centre, Johar Town, felt the negative impact of this international perception yet still managed to put on a good event.

It was more than a decade ago that the Pakistani tanning industry celebrated its own leather show. Pakistan Tanners Association's (PTA) dynamic chairman, Muhammad Musaddiq, wanted a leather fair representing the sector as a whole and conceived the idea of Pakistan Mega Leather Show (PMLS) two years ago when the instituted Steering Committee requested funding from the Trading Development Authority of Pakistan for funding, which it did not grant.

Musaddiq, together with his predecessor Agha Saiddain and in close collaboration with Muhammad Younas, the chairman of the Pakistani Footwear Manufacturers Association (PFMA), finally decided to organise the fair on their own. PTA, PFMA and the Steering Committee organised this new Pakistani leather fair in just four months. This is no small feat, as quite a number of sceptical industry stakeholders needed to be persuaded.

The same organisers, striving for a representation of the whole Pakistani leather sector at the fair, had also tried to include representatives from the Pakistani garment and glove industry but, regretfully, this was not achieved for this year's event. Nevertheless, the logos of these industry associations were displayed.

The organisers obtained the support of the European Union delegation in Pakistan, who arranged a pre-fair seminar in Islamabad, inviting the head of the European delegation; commercial attachés of the embassies from France, Italy, India, Indonesia, Mauritius and the Czech Republic; and representatives of other governments and the World Bank. Further support was obtained from PITCO, which is a contractor for the EU delegation in Pakistan, to assist the former with the leather, shoes, garments and gloves associations by identifying issues and remedies in aiming to upgrade the value-added export-leather sector.

PITCO arranged for funding of the seminar in Islamabad, the 'Group Dialogue' in Lahore, lunch for 100 delegates, and it covered the cost of tickets and hotels in Lahore for the Indian delegation of CLE and journalists from Europe. A couple of weeks before PMLS 2015, the Trade Development Authority of Pakistan (TDAP) also pledged partial financial support from the government.

Stands were sold with the criteria of position and exposure with a clear commercial sustainability in mind. In fact, the organisers expect not only to break even, but to make a profit, which is remarkable for an inaugural event.

The fair was held in the excellent Lahore Expo Centre, which offers all the space one requires in modern, pleasant, well-illuminated exhibition halls, also offering two auditoriums and a number of conference rooms, all equipped with video and sound systems as well as comfortable seating arrangements. The venue can be compared to Lineapelle's new venue in Milan in terms of space and luminous exhibition halls, but then, obviously, on a far smaller scale.

Last year, footwear manufacturers organised an event at the Expo Centre in which the tanners did not participate. This year, they occupied Hall 1 and the tanning industry exhibited in Hall 2. The international participation came from Italy, France, Germany, Spain, Russia, Greece, Turkey, Tanzania, South Africa, Malaysia, China, India and Taiwan - in the tanning and shoe-manufacturing sector.

Engr Khurram Dastgir, the federal minister of commerce, who officially opened the fair by cutting the traditional ribbon, also attended the opening ceremony.

"Stands were sold with the criteria of position and exposure with a clear commercial sustainability in mind."

Elsewhere at the event, the chairman of PTA, in his speech, highlighted various issues of all the sectors of the leather, footwear and garments industries, thus representing all the associations in his aim to unite all stakeholders and form one solid Pakistani leather block.

The chairman of PFMA illustrated the will of the industry to gain a more prominent place in the global arena. The industry requested support from the government and, most of all, requested repayment of duty drawback, which was taking too much time to be reimbursed, creating a challenge for the cash flow of many companies. The minister praised the leather industry as is usual in these ceremonies and promised to bring the industry requests to the attention of the government.

Pakistani tanners are mainly export-oriented and few sell their finished leather to local manufacturers. Musaddiq told the Pakistani tanners, in his speech during the opening ceremony, that it was not necessary to travel long distance when it would take only a few steps to visit potential buyers of Pakistani leather in the footwear exhibition hall next door. The fair attracted few foreign visitors, which is presumably due to little visibility of the event on an international level.

There were a number of foreign exhibitors and each one seemed satisfied with the fair. All pledged to return next year - 27-29 January - and most said that they would apply for a bigger stand. Machine sales agents and their chemical colleagues, some hosting their overseas principles, all said that they had done business, including the export-oriented tanners, which had taken Musaddiq's suggestion to walk over to the next hall, where they made their first sales to domestic footwear manufacturers.

Özdersan's Tunç Özbek, Russian Leather Group of Companies, Gulf Chemicals, Lanxess, BASF, TFC, Zschimimmer & Schwarz, ATLAS, Pielcolor, Stahl, Hueni, ALPA, Italprogetti and Bombelli, just to name a few, are all said to be happy with this first fair. Several Pakistani tanners that had not exhibited but who visited the fair noted that they'd exhibit in the next edition as did the glove and garment manufacturer's associations. The 2016 edition will probably double its exhibition space to four halls.

There were some shortcomings such as the lack of an internet connection and the fact that the public had free access. The footwear fair also functioned as a market place where the public could buy shoes at discounted prices; maybe in the next edition the organisers could consider restricting access to the public for the last day. This fair is like a new-born baby in its first year of life, and if the organisers use creative thinking and maybe also consult foreign professional organisers, start promoting the fair now and focus on attracting international visitors, next year's fair will be a resounding success.

The guest of honour was Rafeeque Ahmed, chairman of CLE India, and he interacted with Pakistani stakeholders during the 'Group Dialogue' entitled 'South Asia: Future Hub for Leather and Footwear'. Ahmed, in particular, mentioned the effluent issues that the Indian tanners face, particularly in Tamil Nadu and Kanpur, regarding the salt residue from the reverse-osmosis process, which was developed by CLRI. He also urged his Pakistani colleagues not to depend on government financial support and to conduct their enterprises independently from eventual export facilitations, as these can be instituted or pulled at will and should not be part of the bottom line.

The fair featured a couple of well-attended seminars. SGS conducted a seminar on restricted substances in which two speakers gave presentations on REACH and corporate social responsibility. SRC, Shafi Reso Chemicals, and the Pakistan Fashion and Design School conducted the second seminar: 'Leather as a Fashion Material'. In this seminar, the experts in relevant disciplines delivered presentations and speeches. 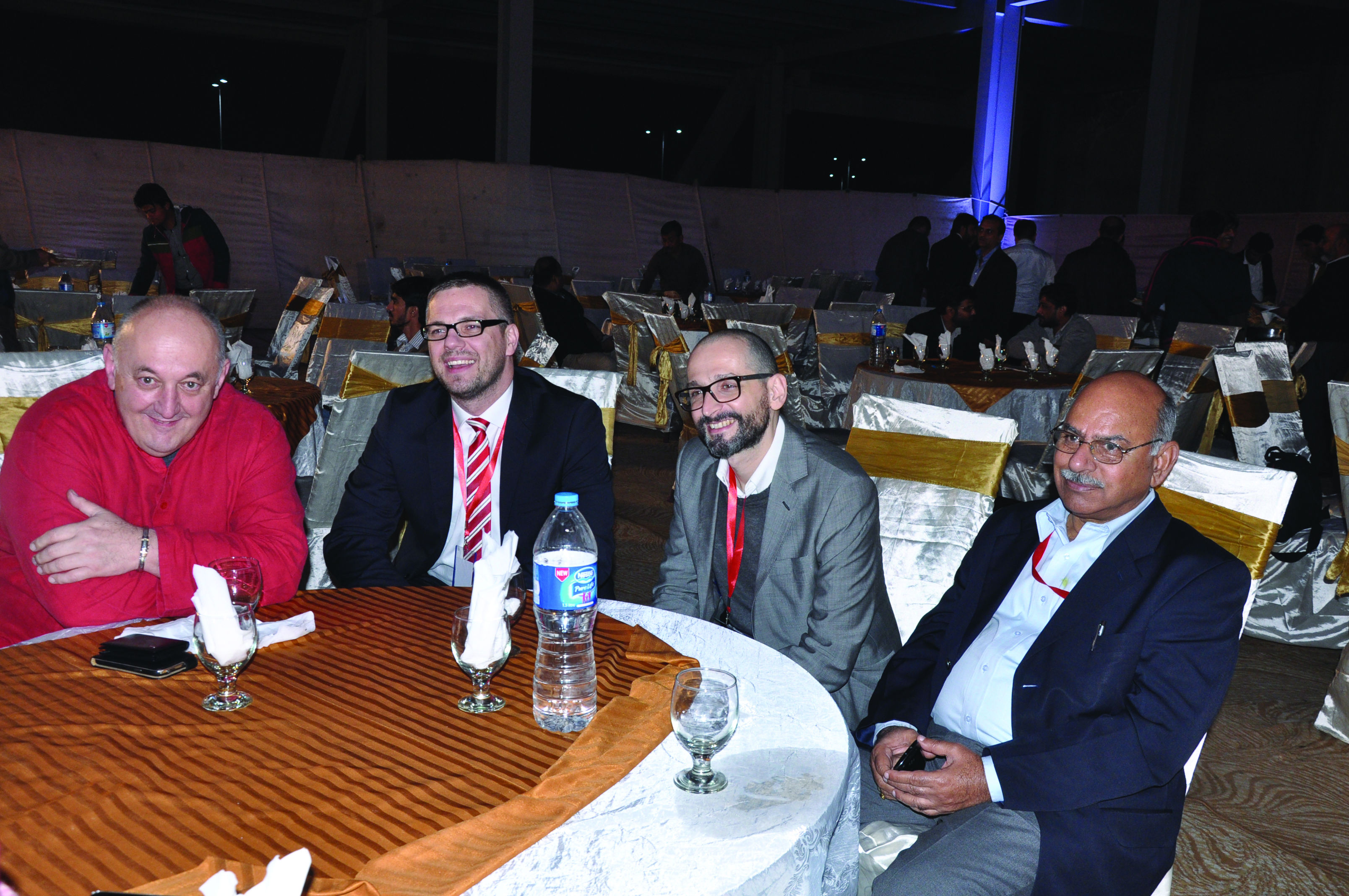 Plenty of connections were made at Pakistan Mega Leather Show.
Post to: