A matter of fact

Tanners, chemical companies and designers gathered at the Metropolitan Pavilion, home of Lineapelle New York, on 16 July for the fourth World Leather Congress, where myths and misconceptions about the leather industry’s impact on the environment were addressed.

The fourth World Leather Congress was held in the Metropolitan Pavilion, home of Lineapelle New York, and although numbers weren’t as large as the last congress in the run-up to ACLE in 2017, it was still strongly attended by a healthy mix of tanners, chemical companies and designers eager to learn more about this misunderstood material.

The diversity was something to celebrate, but for speakers it was a tricky balance to maintain a captive audience without sounding too simplistic or esoteric. However, overall there was a sense that a balance had been struck in order to forge a proactive effort to advance leather with accurate science and data.

‘Leather in Everyday Life’ was the central theme of the congress and sponsors all gave opening addresses. Also, during the first session of talks, Mike Redwood from Leather Naturally reiterated the basic definition of leather that was a good jumping off point: “It is the hide or skin of an animal virtually intact.”

This was a rallying cry for countries like Brazil that have made laws around the use of the term ‘leather’ and how other countries should follow suit. Leather’s limitless capabilities in terms of performance and application was also something that Lineapelle’s Orietta Pelizzari spoke about. “These are the stories we need,” said Smit & zoon’s Egbert Dikkers, who is also chairman for Leather Naturally. “This is fantastic.”

Cotance’s Gustavo Gondalez-Quijano then moderated a session on sustainability and innovation, the highlight of which was a passionate talk from Frank Mitloehner, professor and air quality specialist at the animal science department at the University of California, Davis. He presented a breakdown of myths and facts that seem to swirl in equal measure when it comes to discussions about leather. In a matter of minutes, he argued against the notion that methane from cattle was one of the gravest harms to our atmosphere, in lockstep with some of the worst polluters.

However, he explained that while fossil fuel-based industries are responsible for 82% of carbon dioxide (CO2) emissions, methane only accounts for 10% of the total. Moreover, agricultural sources only account for 9%. It was a convincing rebuttal to all the pressure groups that castigate leather and its reliance on the meat industry.

Mitloehner also spoke about the “2050 challenge”, based on the fact that between 1950 and 2050 the global population will have tripled. Fuelled by longer lifespans rather than increased birth rates, this will create major food production challenges. To drive the point home, he showed how small a percentage of the world’s green space on earth is used for agriculture. Today’s efficiencies in large-scale farming are what make feeding the world’s people possible, he said.

Another argument Mitloehner made was against that humans are eating too much protein, claiming that if the entire country adopted ‘Meatless Monday’ it would only yield a 0.3% greenhouse gas reduction, and if the entire US population went vegan it would merely equate to a 2.6% reduction. In comparison, one transatlantic flight creates 1.6t of CO2 per passenger. It sure put things in perspective. 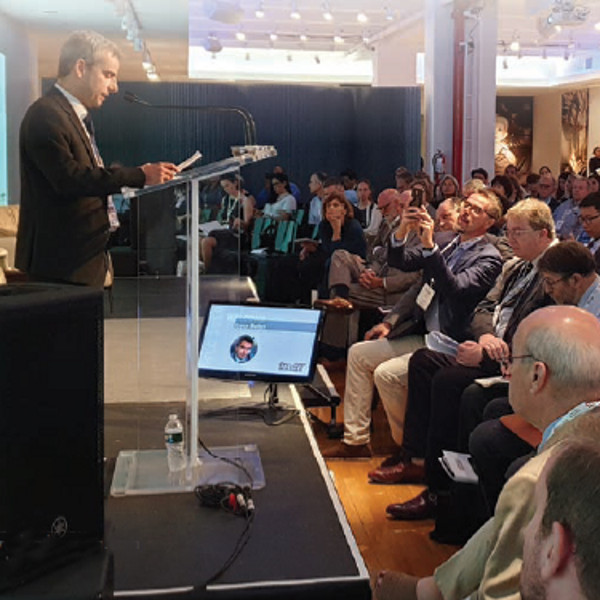