On 31 January and 1 February, the leather world came out in full force for Lineapelle New York at the Metropolitan Pavilion in Chelsea, Manhattan.

Lineapelle New York shone a spotlight on summer 2019 collections, and it was a resounding success, adding several new tanneries to its line-up that filled up the second floor, which is normally reserved for seminars.

For the first time, five Brazilian companies attended as part of the Centre for the Brazilian Tanning Industry, and Brazilian Trade and Investment Promotion Agency’s leather project, which aims to encourage global markets to endorse the country’s leather. Cortume Krumenauer (CK), Courovale by BCM, Curtume Natur, Nova Kaeru and Soubach Special Leathers had a banner event with a lot of energy, orders and foot traffic.

Letícia Luft, the Brazilian Leather project’s manager, was particularly happy with how the event went, as it surpassed expectations. In a press release, Joel Kummenauer, CK’s commercial director, said that its participation would be strengthened, based on the fact that the company had participated in similar events in New York. “Our expectation is to come into contact with important US brands, since New York has offices from virtually all the major brands and also some smaller companies,” he explained.

But Izmir-based Sevimli Deri had a different experience while displaying aniline, nappa and nubuck finishes for footwear, leather goods and garments. Engin Iri, sales and marketing manager, put on a brave face despite the food and Prosecco nearby, and having the company’s samples in the Trend Area downstairs, failing to attract a high number of buyers.

A field test of two isn’t much to go by, especially with the January event being a precursor to Lineapelle in Milan. However, Lineapelle New York was a strong indicator of the US market’s resilience.

The show’s main theme focused on the push for the supply chain to become more transparent, sustainable and accountable, with many companies proudly displaying their certification from the Institute of Quality Certification for the Leather Sector.

Another core focus was empathy, a theme developed by Lineapelle’s Fashion Committee that was detailed in a series of seminars, such as the ‘Know Your Leather’ session, which highlighted the nuances and complexities of the value chain. The fourth edition of this seminar shone a light on the most frequently used raw hides and skins, the leather-making process, and the technical and aesthetic features of different types of finished leather, from the classics of milled grain, glazed, embossed, printed, aniline, coated and laminated kinds, to more fashionable types, such as laser-cut, cut-out, puffed-up, scaly, stitched, pleated and cracked leathers.

Lineapelle New York launched in January 2001 with only 25 exhibitors. Since then, it has experienced steady growth; in July last year, the fair brought in 120 exhibitors and more than 1,300 visitors. This year, there were 123 exhibitors comprising tanneries and producers of accessories, alternative materials and components, which all presented a broad range of samples during the event. Out of this, 31 exhibitors were new.

The US market is vital for the Italian leather industry; according to the fair’s organisers, the country’s exports tripled in value between 2009 and 2016, therefore cementing the US’s position as the fifth-biggest country for Italian-finished leather products. The show’s organic international growth is a testament to other countries that appreciate this booming market as well. 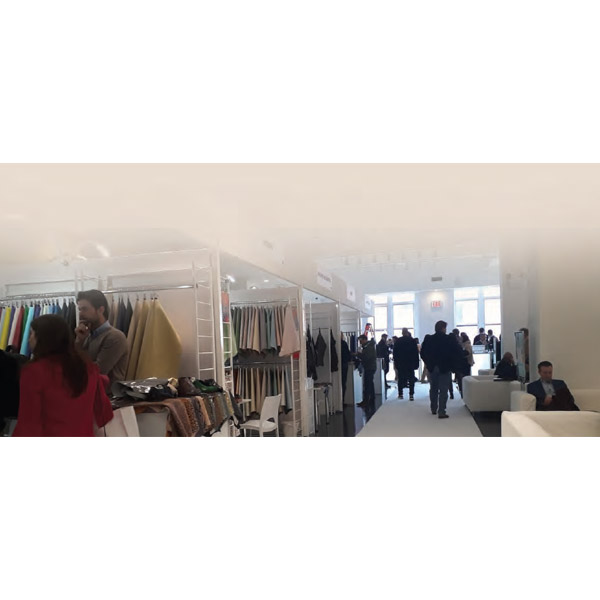