This year’s India International Leather Fair in Chennai was eventful, not least for the announcement of a new $400-million special package to boost the Indian leather and footwear sector. Ross Davies reports.

The most important news to report from this year’s India International Leather Fair, which ran from February 1–3, came before the doors were even opened to the Chennai Trade Centre. At the inauguration ceremony the night before, Leather International was in a marquee a stone’s throw from the exhibition space, to hear Indian Minister of Commerce and Industry Suresh Prabhu announce a special package to boost the country’s leather and footwear industry.

Forming part of the government’s pre-election budget – formally unveiled the following day – the package will see INR2,600 crore ($406 million) injected into the industry over the next three years.

Known formally as the Indian Footwear, Leather and Accessories Development Programme, the initiative is comprised of several subschemes. These include human resources development, through which 432,000 unemployed people will receive official training at an outlay of INR15,000 ($234) a person. Meanwhile, 75,000 existing employees in the sector will have the chance to upgrade their skills at a cost of INR5,000 ($78) a person.

Other subschemes target integrated development of the sector through government grants and subsidies for micro, small and medium enterprises (MSMEs), to cover 30% of the costs of new plants and machinery. There are also plans to establish three to four mega leather and footwear clusters by 2020 at an outlay of INR360 crore ($56 million). The improvement of technology and environment performance are also on the agenda, with the planned upgrade to common effluent treatment plants, for which the government promises to meet 70% of project costs. Elsewhere, INR100 crore ($15 million) is to be spent on creating 200,000 new jobs in the sector, while INR90 crore ($14 million) will be channelled into promoting ten Indian brands on the international market.

In an impassioned speech, Prabhu highlighted the importance of exports to the Indian economy and leather’s role within it. Prime Minister Narendra Modi’s government’s chief aim is to achieve an export turnover of $1 trillion. “This won’t happen overnight though,” Prabhu said. “To export from India, we need to make in India. But even Make in India [one of Modi’s signature manufacturing initiatives, introduced in 2014] is only part of this. We need to design in India, too. Global value comes from the brand, not the product.”

Prabhu said the special package would help Indian leather “grow on the world stage” and “modernise with the times”. The reception to his speech, which ran for around 15 minutes, was overwhelmingly positive.

It couldn’t have been timelier, too. In his welcome speech, Mukhtarul Amin, chairman of the Council for Leather Exports (CLE) spoke of the challenging period Indian leather has experienced over the past couple of years, with exports dwindling from $6.5 billion in 2014–15 to $5.6 billion the following year. According to the CLE, the decline was felt in the first six months of the current financial year, too.

Amin praised the sector’s “fighting spirit” and “aggressive marketing efforts” in traditional markets and new ones, such as Australia, Japan and Russia, while kind words were also reserved for the Indian Government, which he said “has always supported and guided the leather industry”.

The CLE chairman, nonetheless, called on the government for more support in a range of areas, with raw material availability topping the list. According to the CLE, India has 2.5 billion square feet of domestic raw materials at its disposal, but has increasingly resorted to imports of late, in order to procure certain types of leather, and plug shortages in domestic supply chains.

Amin asked for funding support from the Ministry of Commerce and Industry for the establishment of bonded warehouses with refrigeration facilities in the states of Tamil Nadu, Uttar Pradesh and West Bengal, to the tune of INR400 crore ($60.23 million).

He also highlighted the importance of foreign direct investment (FDI) in the industry’s future growth, requesting the provision of a “five-year tax holiday” for 100% FDI units, “so as to promote joint ventures in the leather and footwear sector”. Amin referenced the successful use of similar such tax incentives for foreign players in Vietnam.

Amin’s shopping list also included the creation of a venture capital fund for the sector by a nationalised bank, “for enhancing capacities”, as well as a rise in the basic customs duty exemption limit of leather garment exporters “to enhance the price of competitiveness”. A request was also put in for a new “global market intelligence cell” to track and forecast demand, as well as government subsidies for transportation of cargo “to compete with the likes of China”.

With floor space that stretched to 10,000m2, the Chennai Trade Centre welcomed more than 475 companies in total, with more than 160 exhibitors coming from overseas. China, France, Germany, Italy and Brazil all had national pavilions. Nearly all the stands were hives of mercantile activity, perhaps following the earlier entreaty of Prabhu, who urged exhibitors, “Don’t just exhibit – we need buyers at the fair. Otherwise, it’s pointless.”

Some local exhibitors Leather International encountered admitted they had struggled over the past year at the hands of the government-implemented demonetisation and GST.

“We’ve had our ups and downs,” said one. “Times were especially tough for us smaller companies, especially after demonetisation.” Others were keen to discuss the budget, which, despite the special package for the leather sector, was described by one delegate as “a sop” and “impractical” due to its relaxation of previous fiscal promises.

As part of its revisions, the Indian Government is now targeting a fiscal deficit of 3.3% of GDP for the new financial year starting on 1 April 2018, backtracking on a previous target of 3% made last year.

While smaller businesses, with revenues under $50 million, are set to have their corporate tax rates slashed to 25%, larger companies can expect no such largesse, which one exhibitor described as “unfair” and “punishing for bigger companies”.

Competition from China – represented well at this year’s show, as always – was on the lips of many, although one exhibitor refused to be drawn into the debate, demurring, “You can’t compare India and China – one’s an elephant, the other a tiger”.

While final figures are yet to be confirmed by the event hosts, the CLE and India Trade Promotion Organisation (ITPO), it is likely that this year’s show, the 33rd edition of the IILF, would exceed the 12,630 visitors recorded last year.

With little room to swing the proverbial cat down certain gangways, the ITPO’s decision to expand floor space in Chennai to 15,000m2 by December 2019 – as announced by the government agency’s chairman and managing director LC Goyal – seems a wise one.

“As a rising global power, this country needs greater infrastructure to host global events like this,” said Goyal. This mirrored the words of Prabhu, who said the Indian leather show could be even bigger. Prabhu also promised to open more ITPO offices, if the ruling Bharatiya Janata Party is re-elected in the next general election in May 2019. 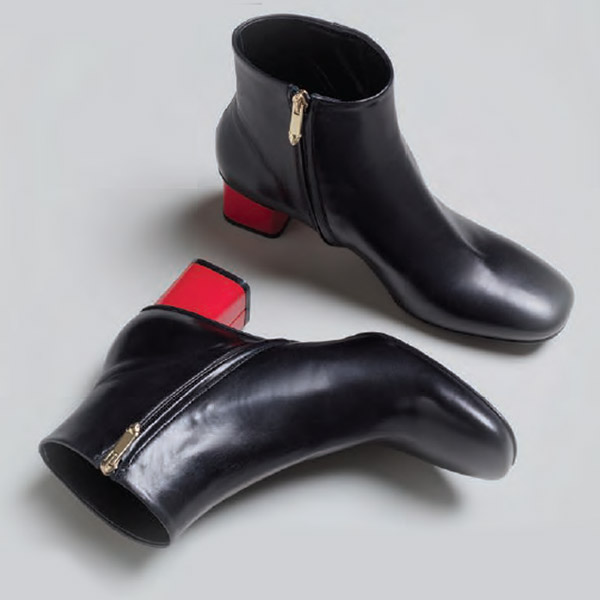 The India International Leather Fair was held at the Chennai Trade Centre in January and drew more than 12,000 visitors from across the subcontinent.
Post to: