What a difference a month makes. Prices that had been trending higher in the weeks leading up to APLF in late March succumbed to lower bids as producers found their forward sales positions declining on a number of selections.

The gradual slump continued until 28 April, when benchmark Texas steers suddenly dropped $3.00. On a C&F basis, this means that the 60/64lb that had been trading, albeit in limited quantities, succumbed to buyer bids (and then, not in the volume desired by some) to $68.00 and $70.00, depending on terms.

At press time, the industry was debating whether the market had bottomed out, or was temporarily paused on its way to even lower prices.

Texas steers were not the only selection to see values drop sharply. Branded steers led by Colorados lost $5.00 C&F at $65.00–66.00, with unconfirmed reports that trader sales were booked below this level.

Butt-branded steers fell $2.00, and heavy native steers – a favourite of automotive seating tanners – lost $3.00 on moderate volume. Wet-blue producers, which amount to nearly 30% of US production, faced even greater declines as stocks began to accumulate in warehouses around the country.

Sellers tend to be tight-lipped about prices, but sources advise that, instead of being able to obtain premiums over wet-salted equivalents of $20.00–25.00, some would accept prices at only $10.00 on some selections. The cow sector also gave ground, losing between $2.00 and $4.00/pc since the Hong Kong Fair.

In mid-April, USDA export numbers showed the combined raw and wet-blue hides sold (but not yet shipped) totalled 3.049 million. This multiyear low would act as a forerunner of the decline just seen.

"The industry was debating whether the market had bottomed out, or was temporarily paused on its way to even lower prices."

A number of industry members expressed surprise recently when USDA exports showed 206,600 hides sold to Thailand. For all of 2016, 619,000 hides were reported sold to that country. Subsequently, USDA said the sales total was delayed, in that 140,000 of the listed total were sold over the previous six weeks, and another 66,000 during the reporting period. Without that ‘catch-up’ number, combined export sales would have totalled just 491,700 pieces. USDA said that, upon further investigation, it had found that most, if not all, of the hides reported to the South East Asian nation were for contract bluing, and were then shipped to China. It’s also interesting to note that regardless of these late reported sales, the market continues to fall.

On 20 April, this composite index showed the pricing on eight major east-west trades between the US, Europe and Asia standing at $1,449.91 for every 40ft container (FEU).

Spot rates from Europe to Asia recently jumped 10% from the previous week, the fourth consecutive week-over-week increase, because of a ‘space-crunch’ at European ports, which was expect to persist until the end of May. Westbound Asia-Europe rates, on the other hand, slipped by 1%.

Drewry noted that rates from Asia to the US also fell 4% from the previous week as “shipping lines failed to implement the 15 April trans-Pacific GRIs”, adding that rates were expected to continue to fall. US producers export more hides and wet-blue than any other single country, and the increased ocean rates will ultimately affect C&F prices.

Cargill, one of the country’s largest meat packers, announced that it would no longer feed its own cattle after selling two lots in Kansas and Colorado to Green Plains Cattle Company.

The feedlots changed hands for $36.7 million, excluding working capital. The transaction is pending a definitive agreement and regulatory review.

As part of the deal, a multiyear agreement was reached by Green Plains and Cargill for cattle to continue being supplied to the latter’s packing plants. Cattle from Green Plains’ existing Kismet (Kansas) feedlot will also be marketed to Cargill.

“The ICHSLTA is internally reviewing the raw material purchasing guidelines recently issued by ICT,” he said. “It is important to note that this document does not unilaterally alter the provisions previously agreed upon between ICHSLTA and ICT in the existing ‘International Contract No. 6 – Hides and Skins’.

"The official terms of International Contract No. 6 remain the same. As has always been the case, specific contract terms are negotiated and agreed upon by buyers and sellers individually in each transaction. We look forward to further mutual engagement with the ICT on ways the official Contract No. 6 language may be updated in the future.”

Markets are typically based on supply and demand. In the case of US hides, for the past 30–45 days, the former has greatly exceeded the latter as producers’ forward sales positions have steadily fallen. This has been demonstrated by weeks of export and domestic sales being lower than slaughter.

"Significantly for US hide exporters, global container freight rates have doubled from a year ago."

In the first week of May, after USDA discovered some catch-up export reporting, export sales numbers surpassed slaughter, but this total didn’t seem to slow the rapid decline in steer prices. Apparently, there were still greater numbers of hides for sale than the industry demanded.

One major producer announced its sales volume, and still failed to halt the decline. Hidenet has been unable to find a drop in steer prices over the past decade to match this sort of drop-off, or in the 30 days since APLF closed in Hong Kong. Of course, the highest slaughter total since 2013 didn’t help and sellers had to lower their ideas to pick up as many bids as they could that would generate some sales volume. It seems unlikely that the numbers show there was enough sales volume to cause a pause in the decline or even create a bounce. The supply figures still appear to be too high.

Like putting merchandise on sale at retail, lower prices typically increase buyer demand. However, prices must surely have to drop further to tempt buyers to guarantee profits against their previous leather sales and traders' short positions. 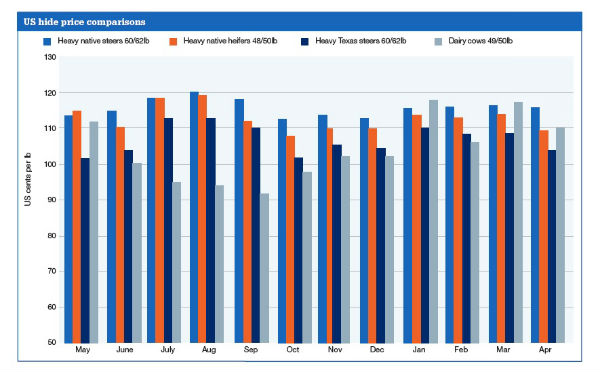 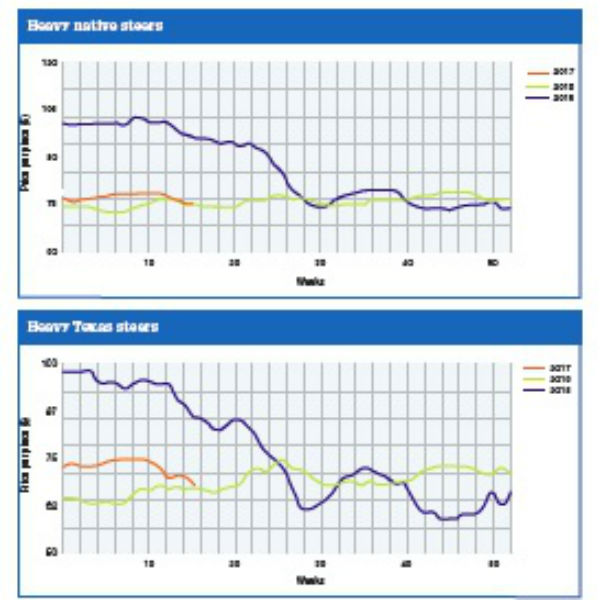 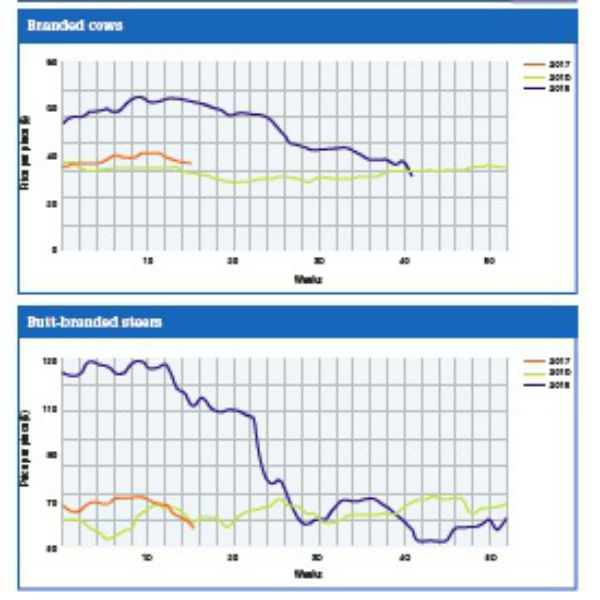 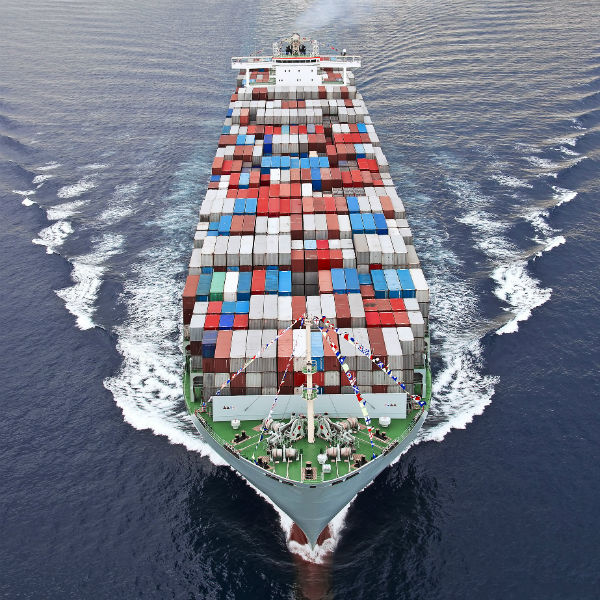 Exports to Thailand appeared to be significantly down in April. USDA found that most, if not all, of the hides reported to the South East Asian nation were for contract bluing, and were then shipped to China. 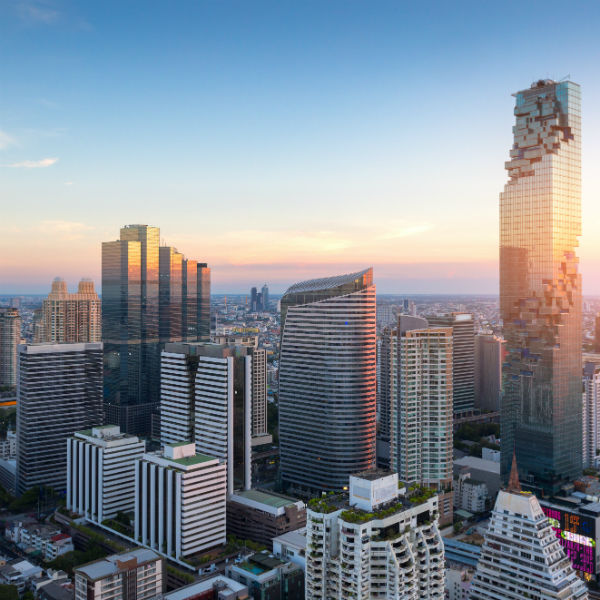