Right after the November Hidenet report, US steer prices, to the surprise of many, began to rise. Heavy Texas steers that sold on an FOB basis in mid-November at $57–58, advanced to over $60. As trading ground to a halt just before Christmas, prices were seen at $65 and $66 FOB. On a delivered Chinese tannery, this translated to $70–72 C&F while wet-blue heavy Texas traded at $83–84.

Right after the November Hidenet report, US steer prices, to the surprise of many, began to rise. Heavy Texas steers that sold on an FOB basis in mid-November at $57-58, advanced to over $60. As trading ground to a halt just before Christmas, prices were seen at $65 and $66 FOB. On a delivered Chinese tannery, this translated to $70-72 C&F while wet-blue heavy Texas traded at $83-84.

As the new year began, prices that were fairly steady over the holidays, begun to erode to the point that by the end of January, 66/68lb heavy Texas steers sold down to $60 or $66-67 C&F. The same selection in wet-blue traded at $80-81 C&F. Branded steers, that are second only to heavy Texas, the most produced selection in the country, more or less mirrored Texas with respect to their price movement. The spread between the two ranged at $2-4. These two selections typically comprise the bulk of a tanner's consumption for shoe upper leather. As footwear brand demand fell off, due to warm weather that slowed retail sales, these two selections began to retreat.

This was not the case for butt-branded steers, however. The price spread between Texas and butts from late November was as much as $10-11 and, as we go to press, it is $9-10. The reason for this is that butts, available in a far lower supply than their more branded brethren, were a favourite of automotive tanners, who are enjoying very good business the world over. Prices on butt-branded steers moved from $72 in mid-November to a top of $74 at year end, before gradually drifting lower to $68-70 where they are at the time of press.

Heavy native steers found the same favouritism as butt-branded steers for the same reasons: comparatively less supply in automotive as well as furniture upholstery demand. Prices peaked by year-end at $76, before declining throughout January to $72-73 FOB. Here again, the spread between Texas and natives was historically wide at $12 or so. All this has been predicated by not just excellent automotive business, but also the decline in shoe-upper leather demand caused by slow sales at retail.

US slaughter ended the year down about 5% from 2014. This means approximately 1.5 million hides. The United States Hide Skin and Leather Association reported that from January through October 2015, exports of US hides and wet-blue were down 19.3% compared with 2014, or 22.5 million hides. This translated to $1.9 billion. Export sales of wet-blue were 28.7% of the total exports and 34.5% of the total dollar value.

The end of the year

Cattle and calves on feed as of 1 December were 10.8 million head. This was slightly below the same period a year earlier. Placements into feedlots however were down 11% from the same period in 2014. November placements were 1.60 million head, which was the lowest November since the US Government began to tabulate this in 1996.

In the first weeks of 2016, all one seems to hear is that with the exception of the automotive upholstery business, which at its highest estimate is less than 20% of world leather consumption, tanners report that there is just not enough demand. There is too much inventory in the Chinese supply chain and a similar story has been heard in Korea, as well as Vietnam and Thailand. Of course, this differs largely from tanner to tanner, but the bottom line is that we haven't heard of any tanner that is under bought.

Usually, one hears the complaint, "Your price is too high; I can buy cheaper elsewhere" as standard 'tanner speak' but not now. Now, the most recently reported complaint is "we don't have enough orders". Hidenet's take on this is that the inroads formerly in all leather products captured by synthetics over the past six to 12 months are not about to vanish overnight.

The supply chain needs time to adjust; however, every brand and every retailer wants something new to show to their customers each season in order to create demand for their product. Leather, especially at current prices, should now be poised to get some of this market share back. We could see it soon and, with it, an improvement in hide demand.

Extracts from the Hidenet World Report

Argentina
Argentine hide prices moved up slightly, more due to currency than anything else. The government lowered the export tax on raw hides by 5%.

Australia
Light and medium-weight ox/heifers traded up A$1 and more at the end of January. However, business has slowed due to the Chinese New Year. Kills have also been low.

Brazil
Green prices were essentially steady. Wet-blue trading was seen on full substance RTR1 a $1.20-1.25 CFR, most of which went to upholstery tanners.

China
The country's leather industry, and most others, are preparing to shut down for a multiweek New Year holiday period.

India
Beef supply was affected in India's Meghalaya state as butchers and cattle traders called for a two-week shutdown to protest cattle smuggling into Bangladesh. The strike, which ended on 3 February, was initiated after the Meghalaya Government failed to prevent smuggling of cattle into Bangladesh.

"All beef shops will continue to remain closed and there will be no purchase of cows from the cattle market till 3 February," vice-president of the Butchers Welfare Association, Generous Warlarpih said.

Namibia
The Ministry of Industrialisation, Trade and SME Development is busy reviving the tannery at Ondangwa, which has not been operational for about two years now.

The deputy permanent secretary in the ministry, Michael Humavindu, told Nampa the factory is being renovated. Faulty machines are being fixed and the ministry is also ensuring that the tannery meets set environmental standards before it starts operating again. The estimated value of the upgrade is between N$40 million and N$60 million.

"The ministry has initiated work to review and complement infrastructural needs around the tannery before it can reopen. Once the requisite work is completed, the ministry will inform the public at large as to the next step," Humavindu said.

Pakistan
From 27 to 29 January at the International Exhibition Center of Lahore in Pakistan, the second edition of the Mega Pakistan Leather Show had around 400 companies exhibiting. There were suppliers, tanners and manufacturers of shoes, and leather craftsmen. 18 foreign companies exhibited. More than 60 Pakistani tanneries had stands as well as 50 shoemakers. All of these companies gathered on approximately 150 stands.

Paraguay
Slaughter remains strong. Wet-blue sales were seen in the past few weeks at US$1.20/m2 C&F.

Spain
Entre Fino doubleface were steady earlier in the month at €11 FOB origin. Merino doubleface sold steady as well, between €10 and €11 FOB.

UK
The pace of activity slowed somewhat due to holiday preparations in China as the New Year continues to show its effect on the other side of the globe. 36kg and up sold at £1.35-1.40, down from £1.36-1.38 the week of 22 January. UK sheepskins were only able to find a few buyers at £0.50 a piece.

Zimbabwe
Zimbabwe's worsening drought conditions are killing cattle, meaning farmers are selling animals at a tenth of their former price, according to Reuters. In what has been billed as the worst drought for 20 years, the national herd size stood at 5.3 million animals last year, reduced from more than 6.0 million the year before.

The Chinese Lunar New Year has disrupted a number of markets across the globe. 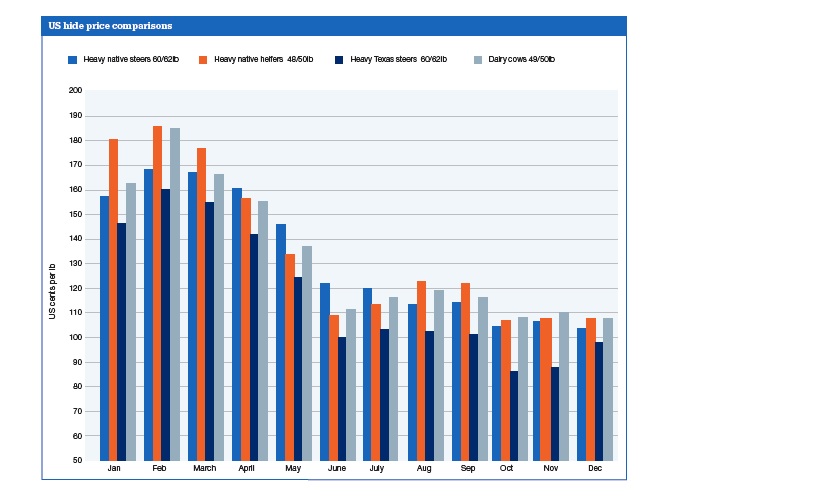 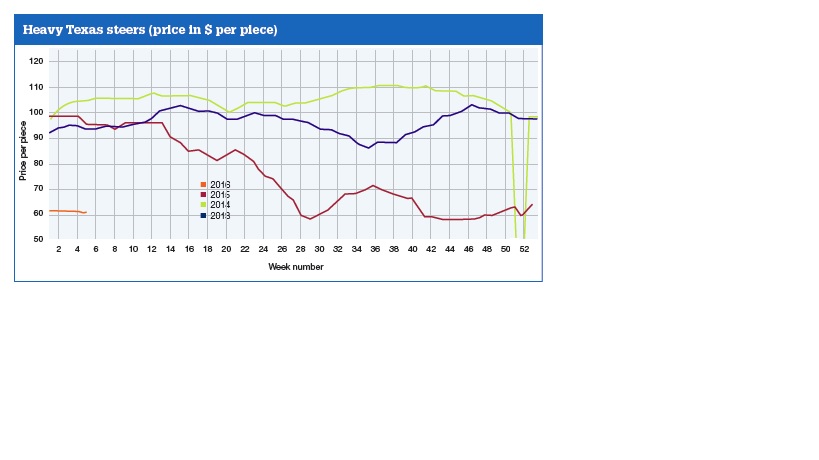 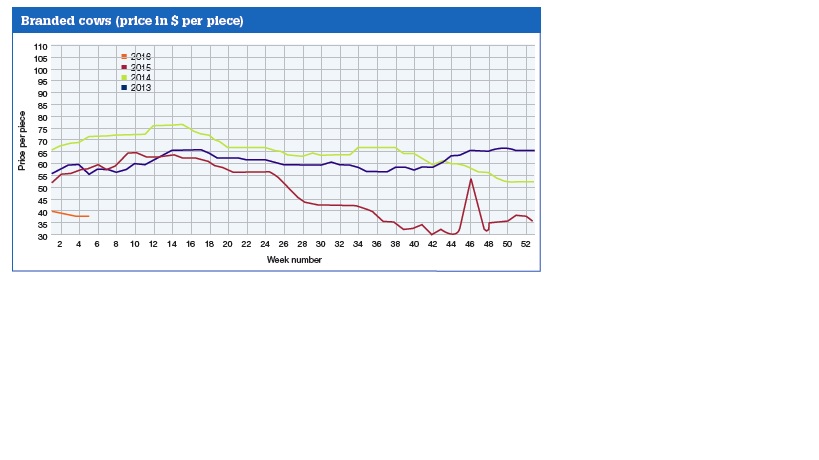 Branded cows (price in $ per piece). 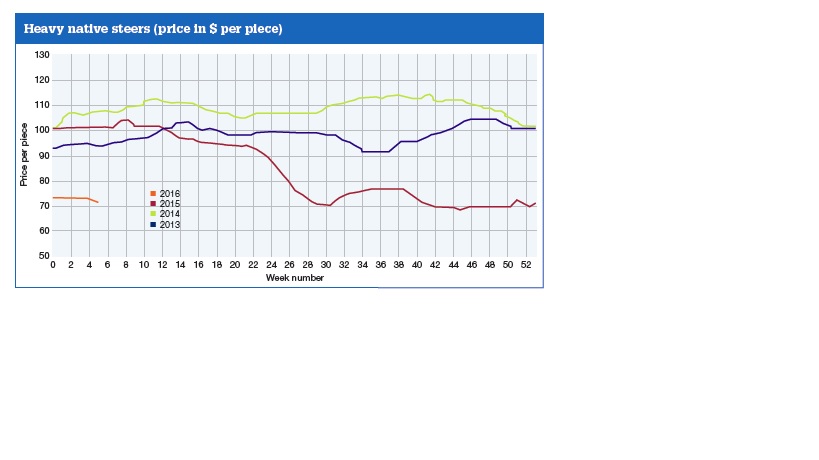 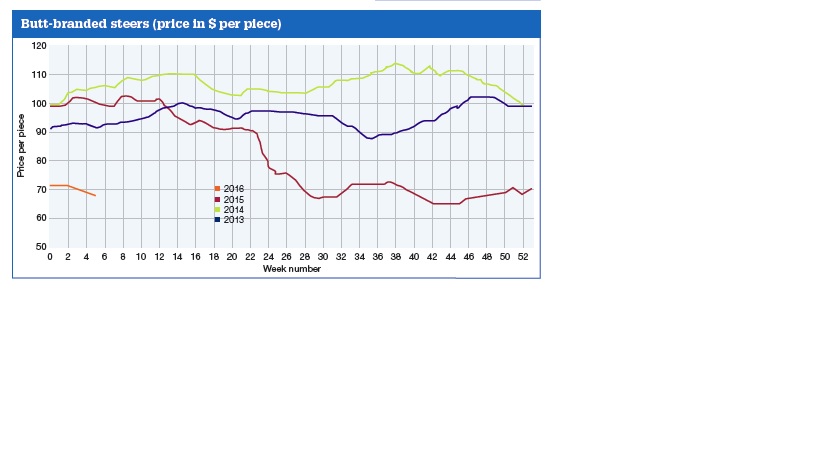 Butt-branded steers (price in $ per piece). 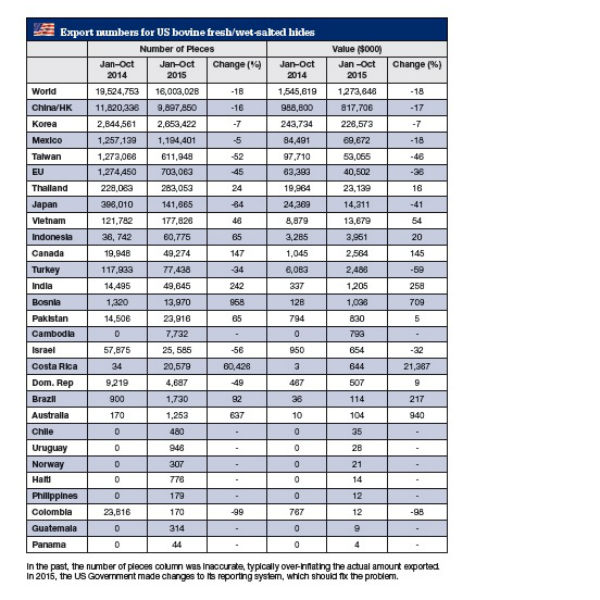 In the past, the number of pieces column was inaccurate, typically over-inflating the actual amount exported. In 2015, the US Government made changes to its reporting system, which should fix the problem.
Post to: