High-performance topcoats designed for automotive and furniture upholstery are generally rich in polyurethane dispersion-based binders. This binder technology has been used commercially for years because it offers a unique combination of high abrasion resistance, flexibility and tactile performance benefits. Recent market trends place a higher emphasis on performance properties that are challenging for traditional finishing systems to achieve. Such properties include dirt pick-up and dye transfer resistance, cleanability after soiling, as well as UV, hydrolytic and thermal stability.

Topcoats featuring acrylic-based binders are increasingly competitive due to intrinsic soiling resistance and stability properties; however, replacing more than approximately 25% of the polyurethane-based resin with acrylic-based resin results in a noticeable loss in abrasion resistance or toughness. The Dow Chemical Company has developed a novel acrylic resin technology designed to offer many of the advantages offered by polyurethane resins but with enhanced soiling resistance, stability and toughness needed to address the stringent demands of today’s market.

Dow Leather Solutions has a well-established history of delivering new acrylic, polyurethane and silicone chemistries into the leather industry. The range of these technologies covers wet-end and finishing segments. In the wet-end segment, acrylic polymers are used to provide softening, light-fastness and strength to the crust. In the finishing segment, acrylic emulsions, polyurethane dispersions and silicones are used throughout the finishing process, including flesh-coating, impregnation, and as components in basecoat and topcoat formulations.

While there are several key chemistries common to wet-end and finishing, Dow Leather Solutions offers a broad spectrum of complementary chemistries in finishing and, on this basis, a further description of these chemistries is provided. As a class of binders, acrylics are used to confer exceptional print, cut-through resistance, flexibility, soft feel, aesthetic value and resistance properties. As a class of binders, polyurethane dispersions offer many of the same performance properties, but with much higher toughness and durability. Silicones in general are added for abrasion resistance and feel. When properly combined, these chemistries can produce systems suitable for most end uses in leather finishing.

The subject matter of this report applies to the topcoat segment of leather finishing and, more specifically, to the automotive upholstery topcoat segment, which is further divided into performance and anti-soiling topcoats. The performance topcoat realm is dominated by PUD binders while the anti-soiling topcoat is dominated by acrylic binders. However, both areas could benefit from higher-performing acrylic binders. At this point, it is critical to mention that even within the performance or anti-soiling sub-segments of finishing, there are many different needs and end-use targets. For this reason, the descriptions provide only a general idea of the expected components and levels.

The generic automotive performance topcoat recipe displays a relationship between the binder(s) (PUD/Acrylic-based), dulling agent and total formulation in which the sum of the binder and dulling agent components will nominally comprise approximately 60–70% of the total topcoat. This balance is critical to the final topcoat’s aesthetics and overall performance characteristics. In addition, there is another ingredient that significantly contributes to film formation, aesthetics and, to some extent, the final gloss: the polyisocyanate crosslinker.

The generic automotive anti-soiling topcoat recipe displays a relationship between the binder(s) (PUD/acrylic-based), dulling agent and total formulation in which the sum of the binder (which is mostly acrylic) and dulling agent components will nominally comprise approximately 40–50% of the total topcoat. This is a much lower level than that used in the performance topcoat. Additionally, the polyisocyanate crosslinker content is lower because a product with lower isocyanate AI is chosen. This is done to introduce more water-miscible solvent into the formulation in order to enhance film formation. The balance of the formulation is made up of several different additives comprised primarily of fluoroalkyl acrylate. In the anti-soiling example, film formation is challenged because there is a high ratio of non-film former to film former.

Having provided a basic description of automotive topcoats and the distinction between performance and anti-soiling coatings, a focus on a particular component, the binder, will help lead into a discussion of the applications properties and advantages of the present novel technology. The performance topcoat will be discussed first, followed by the anti-soiling topcoat. While the two topcoats are related, in that they are both applied to light-coloured upholstery articles, with the anti-soiling topcoat applied on top of the performance topcoat, the composition and performance properties required differ significantly.

The performance topcoat binder component is generally very rich in polyurethane, sometimes contributing 100% of the binder. When present, acrylics have traditionally been limited to about 25% of the binder solids contribution. The high usage of polyurethane-based binder relates to the inherent toughness and flexibility properties attributed to this binder class. In comparison, traditional acrylic-based binders can be engineered to approximate polyurethane-based binders for either toughness or flexibility but to simultaneously achieve both is a technical challenge. Other properties attributed to polyurethane-based binders are low glass transition (Tg) values while maintaining low film tack at ambient to slightly elevated temperatures. In contrast, acrylic binders are generally high in Tg and low in film tack or the converse.

Dow has developed a new class of acrylic-based binders that more closely approximate the performance characteristics ascribed to polyurethane-based binders and include a decoupled relationship between Tg and film tack properties (similar for all binders studied). The experiments that followed showed performance topcoat applications data sets generated using these new acrylic binders.

The binder component of the anti-soiling topcoat is generally very rich in acrylic due in part to the PUD binder’s high affinity for the indigo dyes found in denim jeans. However, there are many different anti-soiling tests and passing a majority of them requires not only an acrylic-rich coating but also a high level of silicone and/or fluoroalkyl acrylate additives. These components play a key role in anti-soiling performance but also add a significant cost burden. The primary driver for the present research is to develop a better acrylic for the performance topcoat while retaining or even improving acrylic anti-soiling performance.

The application properties of the new acrylic binders were studied in automotive performance and anti-soil topcoats. Testing was conducted on commercially available corrected grain crust and also on free-standing topcoat films. Two different performance topcoats were tested, one based on a single binder and another based on a 1:1 binder blend with 50% of the binder coming from a commercially supplied PUD-based bound dulling agent.

Environmental exposure stability was studied on fully finished leather and in free-standing films. Additionally, application properties of the new acrylic binders were studied in an automotive anti-soiling topcoat. The leather substrate used for this work is the same as described above. All other components were identical between comparisons.

The performance topcoat application properties for the single binder comparison included a fail control that contains a general-purpose acrylic binder, two coatings that contain experimental acrylic binders and a pass control that contains a high-performance polyester PUD binder. This comparison can be made because the final gloss is adjusted by means of a binder-free dulling agent. The purpose of the experiment is to position the two experimental binders between known reference standards in pure binder systems. The use of a binder-containing (bound) dulling agent would have resulted in a mixed binder system. The experimental acrylic binders generally perform much better than the fail control and for some properties, such as wear, match or even exceed the pass control.

It is important to note that these tests were run a number of times to assure that the values captured were statistically relevant. The one property of concern is the cold bally flex, which can be passed by both standards but not by either experimental. Cold-flex failure was not anticipated because the Tg of the experimental binders is only a few degrees higher than the controls.

The performance topcoat application properties for the mixed binder comparison included three experimental acrylic binders and a pass control containing a high performance polyether/carbonate urethane dispersion. In this experiment by design, 50% of the binder solids in each topcoat comes from a high-performance PUD-containing dulling agent. The absolute performance is, therefore, based on the contribution of the neat binder (variable) and the binder from the bound dulling agent (constant).

The observed application properties of the selected topcoat systems, suggest that ‘New Acrylic #2’ is still slightly deficient in cold flex and fails cold impact but is otherwise a good performer. ‘New Acrylic #3’ performs slightly better in that both cold property measurements are met, although the cold flex is a borderline pass. ‘New Acrylic #4’ is a better performer overall and matches or surpasses the pass control comparative for all properties measured.

The performance topcoat environmental stability was measured in two separate experiments. The first was run on conventional fully finished leather in a pure binder system. The ‘New Acrylic #4’ binder system was found to offer improvement over the general purpose acrylic binder system and perform just behind the high performance PUD pass control system. It is important to note that the crust selected for finishing in this experiment has a significant impact on the overall performance.

In all cases, the same crust from the same side was used via a matched-pair methodology. Nevertheless, the crust
itself contributes a significant level of embrittlement apart from the finishing composition. In the second set of environmental stability experiments, free films were studied to eliminate the consequence of the crust. In this study, the mixed acrylic/PUD system was found to be more stable, maintain more of the original elasticity and change less in colour than the pure PUD system. This suggests that replacing 50% of the PUD with the appropriate acrylic binder offers improved stability or less embrittlement and film fade.

Dow Leather Solutions has developed a new class of high-performance acrylic binders designed for automotive performance topcoats that approach application properties typically attributed to PUD binders. This allows for elevated acrylic binder use levels that, in turn, enables the end user to benefit from more of the attributes traditionally acrylic polymers such as thermal, hydrolytic and UV resistance to degradation. Additionally, it was found that this new acrylic binder class offers consistent to slightly improved anti-soiling properties. 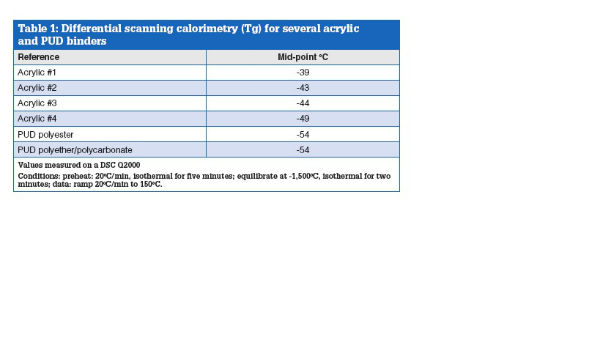 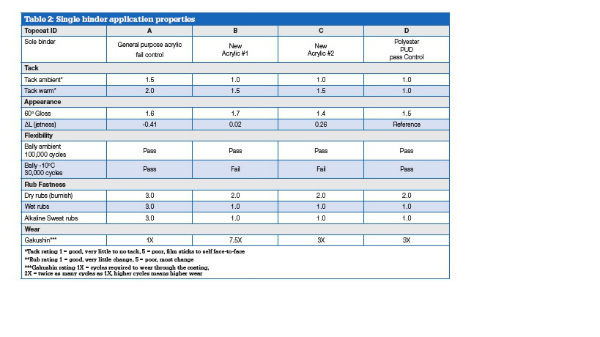 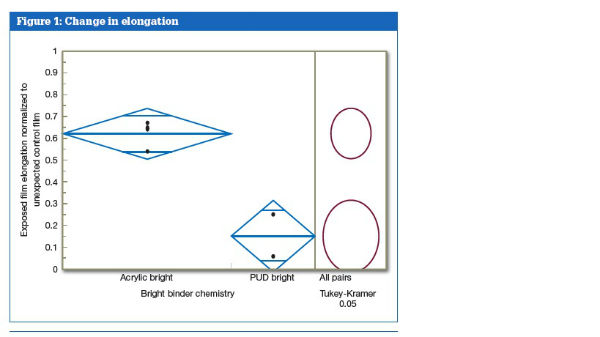 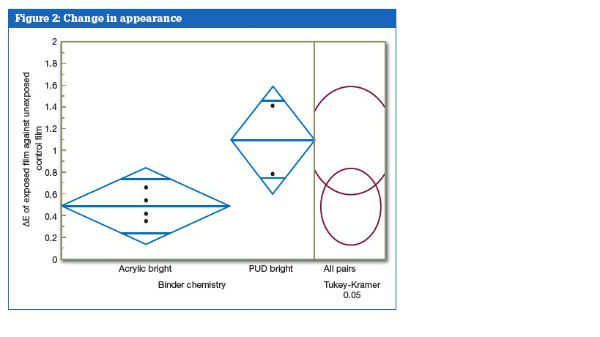