Karl Flowers, technical director of Authenticae, has been hearing an increasing number of complaints from tanners about the staining they are seeing after basification of chromium-tanned leathers. In this article, he asks whether the processing practice is leading to this or if it’s a characteristic of the chemicals that are currently used.

During the basification operation, a weak alkali is added into the acidic tanning bath to raise the pH and increase the reactivity of the chemicals in the bath for the untanned pelt. With a few possible exceptions, most chromium-tanning processes use either magnesium oxide (MgO) or sodium bicarbonate (NaHCO3). For the past 15 years, it has been common practice to use low-solubility MgO because of the control tanneries have over the increase in the tanning-bath pH.

How is MgO used?

When MgO is left in an open container, exposed to a humid atmosphere or placed in water, the reaction given in Equation 1 takes place. This reaction will lead to lumps of magnesium hydroxide forming in the container.

An important aspect of Equation 2 is that if you apply heat to the system, the reaction will tend to favour the left side of the arrows (the undissolved powder quantity will be higher than if the temperature of the bath is lower). This is similar to the thermodynamics seen in lime dissolution. MgO, due to its insoluble nature, can be used as a slow-release alkali, with most of the alkalinity being trapped in undissolved powder until required.

When any basifying agent is added to a tanning bath, it will result in a rise of the bath pH value according to one of three profiles seen in Figure 1. The controlled increase in pH occurs in some MgO or in alkalis that slowly dissolve in tan baths. The semi-controlled manner occurs in slow additions of soluble alkalis; for example, NaHCO3 or in soluble MgO. Uncontrolled increases occur when soluble alkalis are added in one offering. High pH spikes will cause a very reactive tanning bath that will over-tan the grain layer of the leather.

When any basifying agent is added to a tanning bath, it will result in a rise of the bath pH value according to one of three profiles.

How is it made?

Magnesium carbonate (MgCO3) rocks or magnesium hydroxide salts (recovered from sea water) are placed into a furnace and are calcined at specific temperatures, see Equation 3. The calcination that results gives tailored properties to the resulting MgO (see ‘The manufacturing parameters and MgO characteristics’. The reversal of Equation 3, again due to exposure to air, will also result in unuseful lumps of powder.

As you can see from Equation 3, the production of MgO generates a greenhouse gas (CO2). NaHCO3, on the other hand, uses carbon dioxide in its manufacture, but generates greenhouse gases when used in the tanning bath (see Equations 4–6).

The table also shows that manufacturers can produce MgO preparations that consist of pure formulations of the light, hard, or possibly, the dead-burnt kind if they want to get a product that will react with a tanning bath (the further right you move in the table the slower the reaction is). Chemical companies are also currently supplying soluble MgO that tends to be more light-burnt, so that they can be used during soaking of raw material.

After calcinations, the products are formulated (possibly blended) to get a different reactivity and solubility. If a tannery analyses the MgO using particle-size sieves, the range of particles can be assessed to see if it will rapidly increase the pH or will slowly increase it in a controlled manner. These particle-size distributions will have a normal distribution that can vary in its width (see Figure 2).

If movement of the tanning drum stops, the creased leathers will be unevenly exposed to pockets of high-pH liquor. If held for extended periods of time, those pockets of liquor will tan the surrounding material but will not tan areas not adjacent, resulting in a marbled tannage. Marbled tan stains are much easier to obtain with NaHCO3 (that can rapidly raise the pH of liquor pockets). Recently, MgO powder manufacturers blended light-burnt MgO with hard-burnt MgO to help lower the ingredient cost. This results in soluble MgO that behaves like bicarbonate.

NaHCO3 is also, unfortunately, more responsible for green-coloured wet-blue. It is very tempting for production staff to add all the NaHCO3 in an uncontrolled manner, as seen in Figure 1. The result of uncontrolled addition is, as portrayed in Figure 1, a rise of the pH to 5 or higher, resulting in chromium species with a very high basicity. High-basicity chromium salts tend to become greener in colour and tend to penetrate poorly, resulting in their surface fixation. To prevent green-coloured wet-blue, the tanners need to add bicarbonate in a semi-controlled manner; imagine adding NaHCO3 after each of the bumps seen in the semi-controlled curve. A huge barrier to this is the reliance of many tanneries on night staff (who would rather be sleeping) to add multiple offerings without supervision.

Chromium-spotting is a stain, increasingly seen, that is perplexing many factories. It could be caused by many factors, but one belief held more than others is that larger lumps of MgO could be trapped within the grain or between tanned leathers and, during horsing-up, the lump dissolves and causes localised high-basicity staining. The author of this article could not reproduce this on horsed-up on wet-blue (by adding lumps of MgO on to the grain of the wet-blue and leaving it for 48 hours).

Another belief is that the MgO is trapped in the flesh of the hides and the contamination with another grain transfers high basicity. Again, this is un-reproducible, because many tanneries stack grain-to-grain and then flesh-to-flesh rendering this difficult, and many tanneries tan lime-split material that does not have flesh. Tanneries that do lime-fleshing and correct stacking still experience these spots.

Two further possibilities are, firstly, that the lumps require a high temperature, resulting in basicity increase and thermal reactivity, to cause the spot and, secondly, that the formulation of the MgOs include highly soluble components that are causing spotting. The last stain to cover is not on wet-blue. In the image above, you can see the base colour of light-burnt MgO and hard-burnt MgO powders. The more commonly used hard-burnt MgO is paler than the light-burnt, but both still have a grey cast. The colour of the MgO generally means that in glutaraldehyde tanning the resulting wet-white has a dirtier colour. The vast majority of wet-white manufacturers currently use NaHCO3 to basify their tannage, showing that the tanneries can schedule a carefully controlled basification using a cheaper basifying agent. 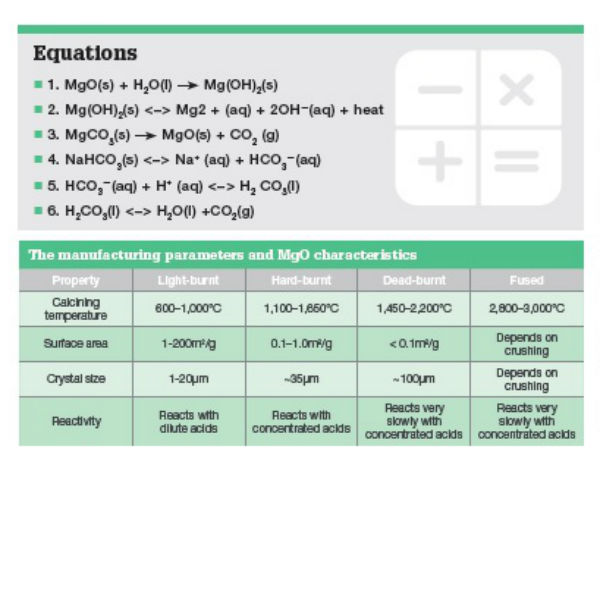 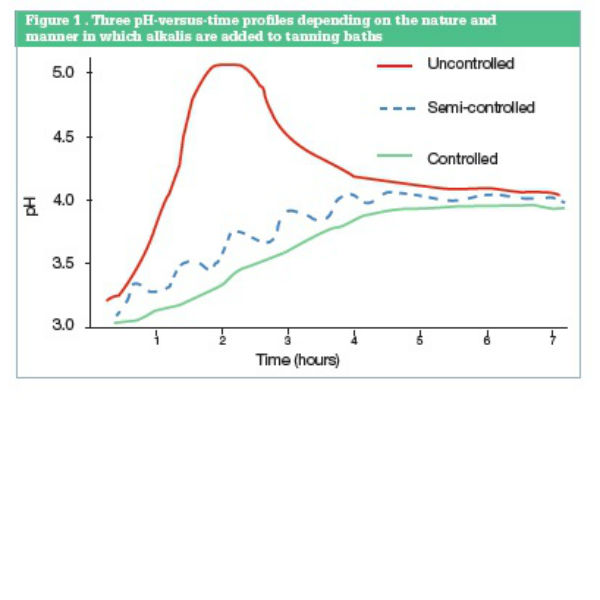 Figure 1. Three pH-versus-time profiles depending on the nature and manner in which alkalis are added to tanning herbs. 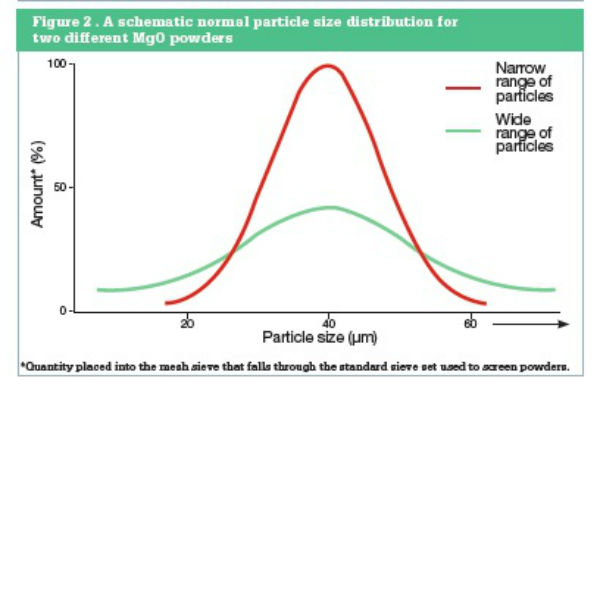 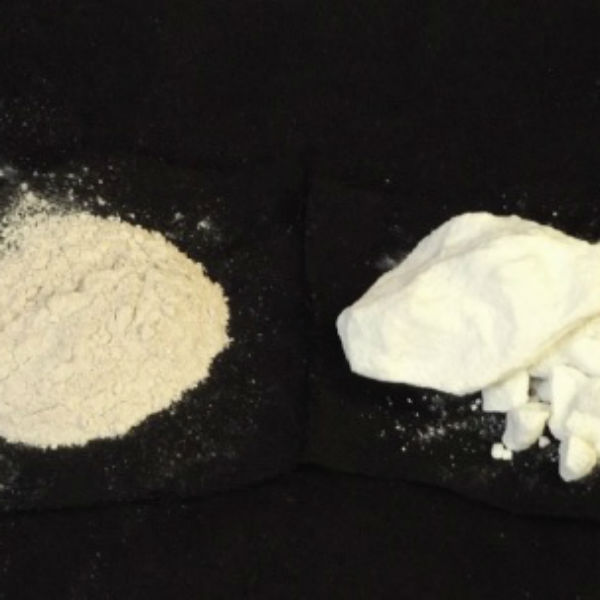