Following APLF in Hong Kong, discussions during the International Council of Tanners (ICT) highlighted the market trends for several prominent leather-manufacturing countries. Leather International takes a closer look at them in detail, beginning with Centre for the Brazilian Tanning Industry (CICB), and Brazilian Trade and Investment Promotion Agency (Apex-Brasil), presenting figures for the Brazilian leather industry in 2015 and perspectives for 2016.

The Brazilian leather sector registered a drop of 23.2% in value in exports of 2015 compared with 2014. The total value of 2015 was $2.265 billion; mainly from decreases where exports for China/Hong Kong were down 27.9% and the US was down 21.7%. These two countries represent about 50% of Brazilian exports. Considering the number of bovine hides, figures were slightly lower than 2014 (-3.8%), showing that the main reason for the value fall was the average prices of hides. Total hides delivered abroad in 2015 were 32.9 million.

In order to raise the sales of higher-value-added leather, the Centre for the Brazilian Tanning Industry (CICB) worked on a series of actions such as business and image promotion, opening of new markets and the expansion of the market share in already known destinations. Activities include trade missions to several countries, the sector’s participation in the most renowned international fairs and enhanced communication with international specialised media.

During January and February, the Brazilian exports of hides and skins showed an expressive increase in the number of hides compared with the same period of 2015 – up 26.3%. However, as average prices are still lower compared with the beginning of 2015, the total value was 7.8% lower than 2015.

Difficulties will continue throughout the year, with lower demand and competiveness of synthetic material always present and growing. After all, CICB is always promoting a number of measures to help exporters to overcome the difficulties imposed on the industry, such as Brazilian infrastructure bottlenecks, high taxes, high labour costs and the threats of alternative material.

The Leather Preview Project developed in partnership with Apex-Brasil (Brazilian Trade and Investment Promotion Agency), will show materials trends to be presented to designers, buyers and entrepreneurs, introducing the creative works that are due to start soon.

Sustainability is also a watchword in the leather sector in Brazil, where the seal of sustainability is being developed and integrated in the coming months with the support of the Brazilian Government.

Moreover, the permanent ruling of the Brazilian Leather Law is being enforced in all leather chains and among consumers in order to prohibit the use of the term ‘leather’ in products that are not made exclusively from animal skin. The offense is a crime of unfair competition under Article 195 of the Brazilian Criminal Code, whose penalty is imprisonment of the offender from three months to one year, or a fine. ? 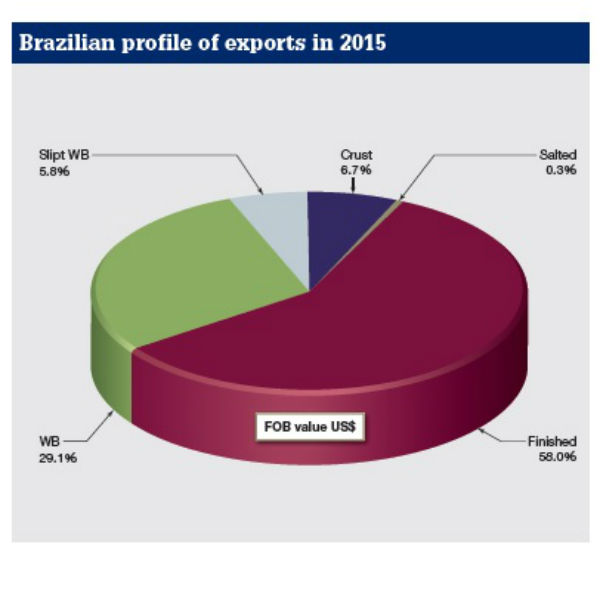 Brazilian profile of exports in 2015. 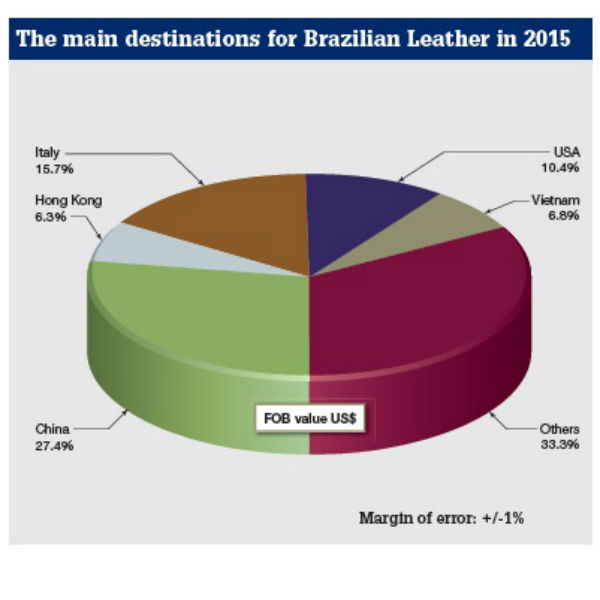 The main destinations for Brazilian Leather in 2015.
Post to: