JD Putshaka, SF Tanko and A Boniface from the Departments of Research and Development, and the department of Environmental Management, at Nigeria’s Institute for Leather and Science Technology present excerpts from their study into solvent precipitation of chromium(III) in tannery effluent.

The ability of six organic solvents – methanol, ethanol, acetone, petroleum ether, n-hexane and toluene – to precipitate chromium(III) was determined by mixing each of them with an equal volume of chromium containing tannery effluent. Results obtained indicate that acetone, which precipitated 99.11% of chromium(III) in the effluent, stands out as the best solvent in the precipitation process, with n-hexane precipitating the least amount (2.74%).

The result also reveals that the percentage of chromium precipitated increased in the following order: acetone > ethanol > methanol > petroleum > toluene > n-hexane. This is an indication that polar solvents are better solvent precipitants of chromium in solution than their non-polar counterparts. The concentration and percentage chromium(III) precipitated by the solvents identified as active precipitants (acetone and ethanol) was observed to increase with an increase in dosage of the solvents. The ratio 1:1 of solvent to effluent was found to be adequate to significantly precipitate chromium in the mixture, which can be reused in the chrome-tanning process.

Chromium is commonly employed in the leather-tanning process and can be found in discharged effluent, which may contain 30–40% of the total amount of chromium used during leather processing. Chromium may also be found in deploration plants or streams, where it ends up as part of sludge formed after waste water treatment. Several chemical and biochemical methods have been employed by researchers attempting to recover chromium from tannery effluent. The use of alkali such as calcium hydroxide, sodium hydroxide and magnesium oxide in precipitation chromium in effluent has been reported, and ion exchange methods have been used in the selective removal of heavy metal ions from water and industrial waste water.

Effluent samples were collected immediately after the chrome-tanning process at the tannery in the Nigerian Institute of Leather and Science Technology. The sample was filtered to remove suspended particles using a sieve of mesh size 0.4mm. After filtration, the effluent was stored in a 1L PET bottle and kept at about 30°C.

Antisolvent activity of the six organic solvents used in precipitation chromium in effluent was determined as follows: the effluent (20cm3) was measured and placed in six separate 50cm3 graduated sample bottles and the chromium in each was precipitated by the addition of equal volume (20cm3) of the separate solvents. The mixture in each bottle was covered, vigorously shaken for 30 minutes and allowed to settle for 24 hours at a room temperature of 27–30°C. The volume of chromium precipitated by each solvent was noted and recorded. Antisolvent activity of the solvents was determined by the formation of a clear precipitate after the stated settling period.

$8.19 billion
Value of the global market for leather chemicals by the end of 2020.
Transparency Market Research

The initial concentration of chromium in the effluent was determined using atomic absorption spectroscopy (AAS). The resulting chromium precipitate formed by each solvent after settling for 24 hours was thoroughly shaken and separated by filtration through filter paper. The chromium concentration in each filtrate was also determined by atomic absorption spectroscopy and the percentage precipitated was calculated.

The percentage of chromium precipitated at varied doses of organic solvents (acetone, ethanol and methanol) was determined by titrating each antisolvent against the effluent. During the process, 5–25cm3 of each antisolvent was titrated against 20cm3 of the effluent, which is a set of five separate 50cm3-graduated measuring cylinders for each antisolvent at intervals of 5cm3. Each batch of five sets of the mixture of the antisolvent and effluent was shaken for 10 minutes and allowed to settle for a period of 24 hours, after which each mixture was thoroughly shaken again and then filtered.

The optimum dose required of each antisolvent for the precipitation process was noted and recorded. The chromium concentration in each filtrate was also determined and the percentage precipitated calculated using the formula previously stated.

The ability of each organic solvent used in precipitating chromium(III) in equal volume of the effluent at different observed pH values is shown in Table 1. It can be deduced from this result that there was little variation in the pH values of the mixture of the solvents and effluent; however, there were significant variations in the volume of precipitate formed after the mixture was allowed to settle for a period of 24 hours. The volume of chromium precipitate formed by treatment of the tannery effluent with acetone and ethanol was observed to be far lower than the volume of effluent in the mixture, thus implying better ability to serve as precipitants in this process.

This can clearly be seen in the volume of chromium precipitates formed (Table 1) in which 2.5cm3 and 3.0cm3 were recorded for acetone and ethanol respectively. This can be attributed to the ability of these solvents to reduce the solubility and hydration of the chromium ion in solution, thus exhibiting antisolvent characteristics in the precipitation process. Some organic solvents (antisolvents) have been reported to reduce solubility and dehydrate ions or molecules in solutions, thereby forming insoluble products in the form of precipitates/crystals.

It can be observed that methanol could not produce a very clear precipitate after the stated settlement period, with only 12cm3 of the mixture observed to be in the form of sludge. This could be due to the fact that it is the most polar among the solvents used in this study, and thus has a lower tendency to reduce hydration of the chromium salt in solution. As the most polar solvent used in this study, it has the capacity as water to solvate chromium ion as its molecules orient around it by electrostatic attraction.

Solvent precipitation of chromium(III) was observed to be worst with solvents such as petroleum ether, n-hexane and toluene, as no clear precipitate was observed to be formed after settlement for the stated period, and therefore these solvents cannot be recognised as precipitants in this study. Their inability to precipitate chromium in solution is due to their existence as non-polar solvents, which ordinarily are not miscible in the chromium-containing aqueous solution, this being in accordance with the solubility statement that like dissolves like. For this reason, these non-polar solvents do not have access to hydrated chromium ions or molecules so as to dehydrate and precipitate them.

Table 2 represents the concentration of chromium precipitates formed when equal volumes of each solvent and effluent were mixed and allowed to settle for a period of 24 hours. It can be observed from the result obtained that antisolvent activity of the solvents used in this study increased in the following order: acetone > ethanol > methanol > petroleum ether > toluene > n-hexane. This is an indication that polar solvents (acetone, ethanol and methanol) are better precipitants of chromium in solution than their non-polar counterparts (ether, n-hexane and toluene), thus can serve as solvents in the precipitation of chromium in solution. Acetone and ethanol have been reported to serve as precipitants/antisolvents in the precipitation of some food and pharmaceutical products.

The percentage of chromium precipitated by acetone and ethanol identified as good antisolvent when equal amounts of each and the effluent was mixed and settled, as Figure 1 indicates that acetone had the highest percentage (98.02%) of chromium precipitated with the least percentage (2.74%) recorded for n-hexane. The reflection of this result is due to the ability of the former and the inability of the latter to precipitate chromium because of their polarity, and also intermolecular interaction between the solvated chromium ions and salt in solution. Clear chromium precipitates were observed to be formed by acetone and ethanol with lower volumes as they aggregate and cluster together.

The effectiveness of the solvents in precipitating chromium(III) in this study is in the following order: acetone > ethanol > methanol. This implies a general decrease in their ability to serve as precipitants with an increase in polarity. It can also be concluded that the most polar solvent, methanol, did not display good activity in precipitating chromium(III) in solution. Conversely, acetone and ethanol were able to significantly precipitate the metal, and thus perform actively in the precipitation process.

These solvents have also been reportedly used to reduce protein solubility by decreasing surface hydration, thus promoting aggregation of molecules. Some organic solvents and antisolvents are known to precipitate molecules or ions in solution by reducing water activity and the solvation power of water for charged hydrophilic ions. This means that acetone and ethanol in this case must have reduced the solubility of chromium in solution by reducing the hydration and solvating power of water for it in solution. Since the chromium salt is hitherto in aqueous solution, an addition to the solvent there would be an intermolecular interaction between the solvent such as ethanol and water forming a hydrogen bond. This form of interaction simply implies that the hydrating and solvating power of water for chromium ions or molecules is being reduced, thus its precipitation is bound to occur.

The observed increase in the percentage of chromium precipitated with an increased dosage of the antisolvent can be attributed to the increase in hydrophobic interaction between chromium molecules as the solvent molecules are hydrated, reducing the amount of water available for its dissolution. As the concentration of the antisolvent is increased, the amount of water available for dissolution of chromium is decreased, thus there is an observed increase in concentration of chromium precipitated with an increase in dosage of antisolvents (Table 3). Maximum precipitation was observed when the mixture (solvent and effluent) contained 50% of either ethanol or acetone. Deoxyribonucleic acid has been reported to be precipitated when ethanol composed 64% of the solution. This invariably means that addition of antisolvents to the effluent during the precipitation process may also involve the hydration of the solvent molecules in the mixture, thereby reducing surface hydration of chromium molecules in solution as more hydrophobic, or alkyl, groups of the antisolvents are available, thus making them more insoluble and susceptible to aggregation-forming precipitates.

This study led to the identification of organic solvents such as acetone and ethanol, which performed actively and can serve as antisolvents in the precipitation of chromium(III) in tannery or other chromium-containing effluents. It has also revealed that non-polar solvents such as petroleum ether, n-hexane and toluene did not exhibit good antisolvent activity. However, there are environmental and health concerns about the use of solvents like methanol and acetone, therefore ethanol would be the solvent of choice in the chromium(III) recovery process via solvent precipitation. Further studies would be required to ascertain conditions for effective performance of the identified solvent or solvents in the precipitation process. 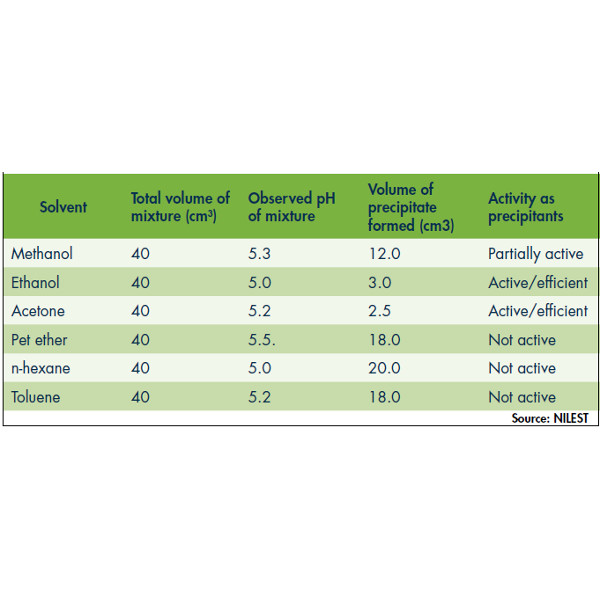 Table 1. Antisolvents activity of solvents in precipitation of chromium in equal volume (20cm3) of effluent 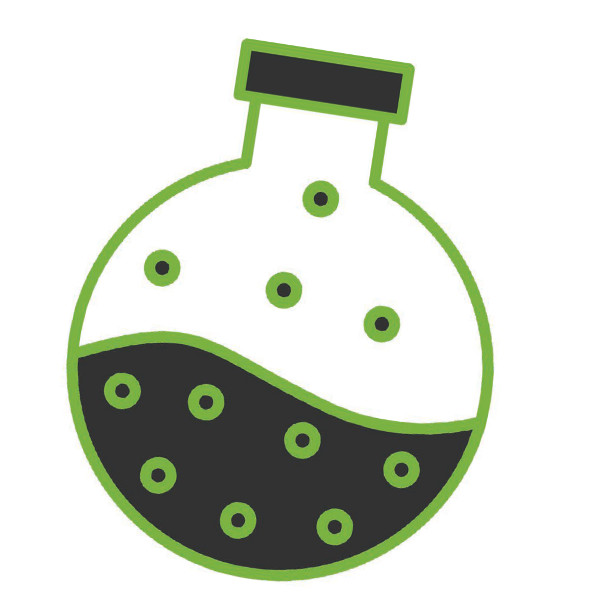 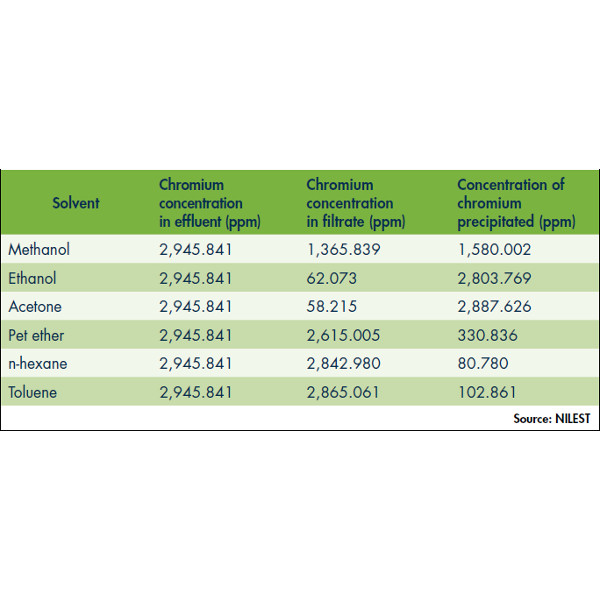 Table 2. Concentration of chromium precipitated by solvents in equal volume (20cm3) of effluent 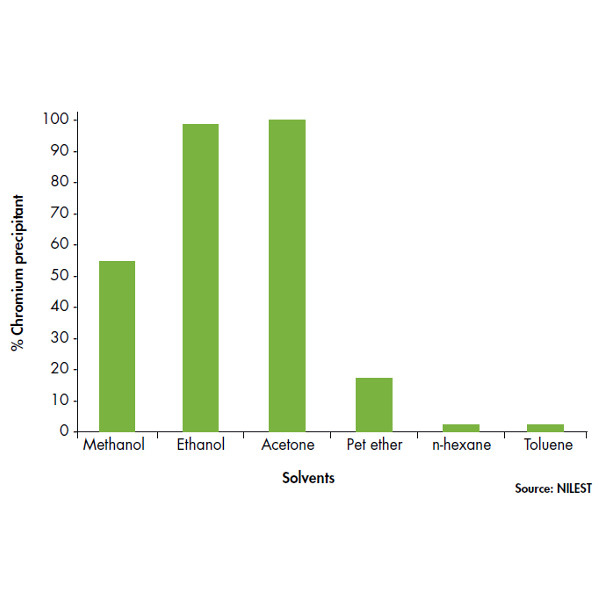 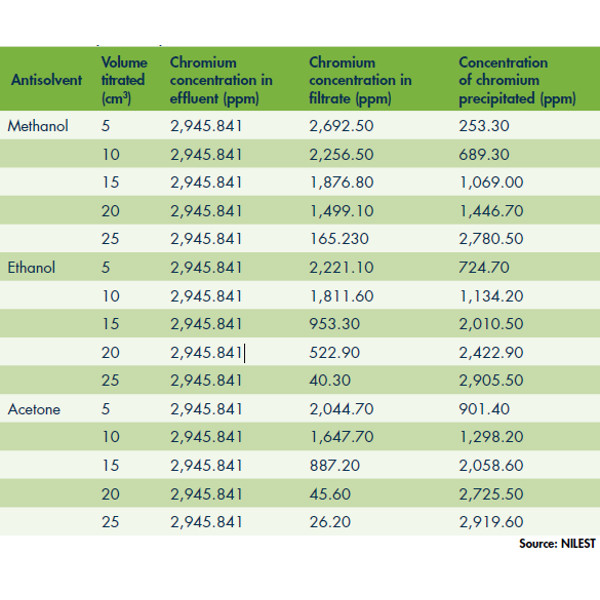 Table 3. Concentration of chromium precipitated in 20cm3 of effluent at varied dose (5–25cm3) of antisolvent 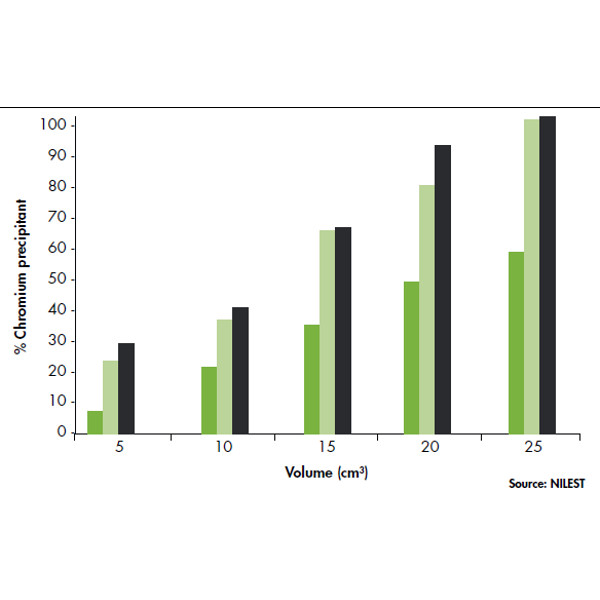 Figure 2. Percentage chromium precipitated in 20cm3 of effluent at varied doses (5–25cm3) of antisolvent
Post to: