Leather International made its way to the south of France in April for Lectra’s annual automotive leather conference, held at the company’s Cestas-Bordeaux campus. With a growing global market for car seat covers and the rise of more advanced vehicles, optimism persists that demand for leather interiors is as strong as ever.

There was something of a congratulatory spirit amid the delegates who filed into Lectra’s state-of-the-art manufacturing and technical centre on the outskirts of Bordeaux in April, for the company’s annual automotive leather conference.

With French aviation and rail staff in the midst of rolling strikes and promising a “spring of discontent” for President Emmanuel Macron’s government, there had been fears that the twoday conference in Cestas might be unduly impacted.

But with attendance figures as strong as ever for the fourth edition of the event – which kicked off on 25 April – Marc Douay, Lectra’s worldwide automotive marketing director, addressed attendees as “heroes”, with visitors venturing from as far and wide as China, Korea, Brazil, Uruguay and Tunisia.

A market on the rise

The international market for automotive seat covers hit $12 billion in 2016, of which $4 billion represents a growing leather segment. With cars being upgraded on a constant basis – particularly premium models and sport utility vehicles – new types of mobility and uses are emerging, placing even more of an onus on exceptional interiors.

Under the dual slogans of ‘Go Digital’ and ‘Industry 4.0’, the central theme of the event was the impact of the digitalisation of the supply chain on automotive suppliers and tanners, as well as how to ‘accelerate industry from prototyping to a leather digital cutting room’ – particularly in the context of cars entering the autonomous age. Driverless cars might be the future, but will the need for leather interiors be altered?

In this regard, leather has “a bright future”, according to Benny Daniel, mobility consulting vicepresident at Frost & Sullivan. With a digitalised automotive world on the cards, Daniel claimed there will be an even greater need for leather to fulfil niche customisations.

New business opportunities should be aplenty for the sector, with the leather value chain taking on increasingly strategic roles.

“One of the biggest touchpoints is the interior,” said Daniel. “Customers want more than just a vehicle. It’s a question of how comfortable that journey will be. Leather has a bright future and will play a very important role in automotive design and customisation.”

Nathalie Saint-Martin, purchasing vice-president at Faurecia, mirrored this sentiment, arguing the interior of vehicles will continue to be a key differentiator in the car showroom for years to come. In her address, ‘Cockpit of the Future’, Saint-Martin claimed, “As long as people like leather in their home, they’ll want it in their car.”

Lin Cong, general manager of Chinabased SCI Seating, spoke of the benefits his company had enjoyed from the use of digitalisation in the trim design process, which he said, “can reduce lead time by up to two months, with a positive impact down the value chain”.

With an economy predicted to be the world’s eighth biggest by 2050 – as well as being the seventh-largest producer of car parts – Mexico is positioning itself as a strategic hub for automotive leather production, said Florian Schrey, vice-president for design for Seton AutomotiveLeather, part of the GST AutoLeather group.

Leather won’t ever go out of fashion in either luxury or low-segment cars.
– Claus Lattner, Yanfeng

Home to a livestock of 16 million cows and with the world’s second-biggest automotive leather crust production after Brazil, Mexico’s prospects are strong, said Schrey, but not entirely unencumbered. Question marks remain over the legitimacy of “certain leather interiors” while cutting yields aren’t where they should be.

In a wide-ranging, impassioned speech – which included quotes from historical figures as diverse as Albert Einstein and Pete Seeger – Schrey also urged producers to show more imagination when it comes to interiors, such as the recycling and repurposing of automotive leather.

After a hearty lunch, which provided attendees the opportunity to discuss the morning’s talks in further detail, the first afternoon resumed with a roundtable discussion, featuring Daniel, Schrey, Claus Lattner of Yanfeng and JBS’s Denis Almeida. The session carried much of the optimism on automotive leather’s future that underpinned the talks earlier in the day.

“There is no more durable material than leather,” said Almeida. “Leather has a great future in the automotive industry. Leather application in cars is very different to, say, furniture. In the auto sector, leather is made to look more synthetic.

“Leather will last forever – it will never die,” added Lattner. “Even with electric cars, leather will remain. Leather won’t ever go out of fashion in either luxury or low-segment cars.”

Customers want more than just a vehicle. It’s a question of how comfortable that journey will be.
– Benny Daniel, Frost & Sullivan

Nonetheless, Lattner said there was space for the ‘living room’ feeling of leather to be more a common feature in cheaper cars. “I don’t like cars using PVC or PU and end users thinking it’s leather – it’s not leather,” he said. “But unfortunately, we do use PVC. What we need to do is take a nice leather and make it even nicer, through the likes of embossing. We need to make leather even smarter.”

“We need to relax,” said Daniel. “Leather is an asset luxury – the touch, the feel, the look. For Generation Z, it won’t be any different. What leather will be, though, is more experiential – a digital touchpoint.”

On a shorter second day, the stand-out presentation was given by John Sousanis, managing director of Wards Intelligence, who gave a run-through of the top ten automotive interiors of 2018, as selected by his Boston-based consultancy.

In summary, Sousanis said the growth of the luxury and crossover utility vehicles “will drive growth in automotive leather globally through the next decade”. According to figures, the luxury car market’s share has risen from 10 to 13% in the past year, with 53% of crossover models now decked out with leather interiors.

The US continues to lead the way for leather coverage in the automotive sector having surged from 29% in 2001 to 48% in 2017. “About half of the cars sold in the US have leather seats,” said Sousanis.

Variety and personalisation – such as choice of colour, material and sophisticated leather application – will also be “key differentiators”. To meet increasing such demands, “OEMs will require flexible innovative material suppliers and manufacturers”, added Sousanis.

Between speeches, there was also an opportunity for delegates to venture onto the factory floor and witness first-hand Lectra’s computer-aided leather cutting and software technology. This included the VersalisAuto cutting line, the latest generation of CAD/CAM systems in an all-in-one integrated cutting line for automotive leather.

While buses gradually pulled up outside to shuttle delegates to Bordeaux Airport after lunch, Douay wrapped up the conference with a rallying cry based around collaborative spirit. 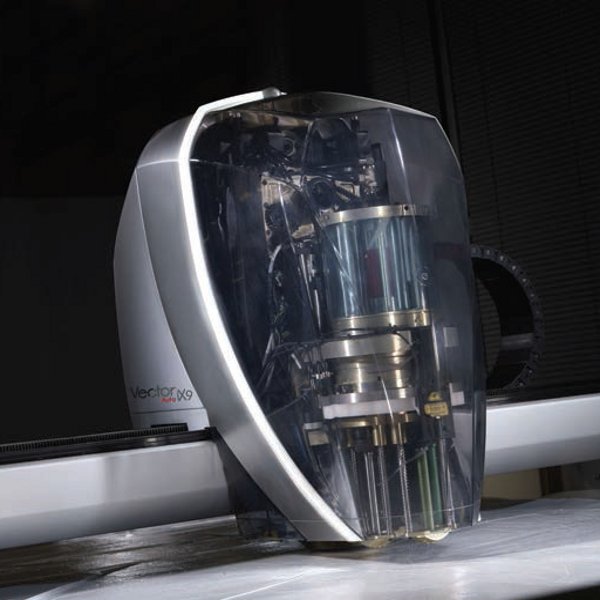 The cutting head on the Vector iX9. 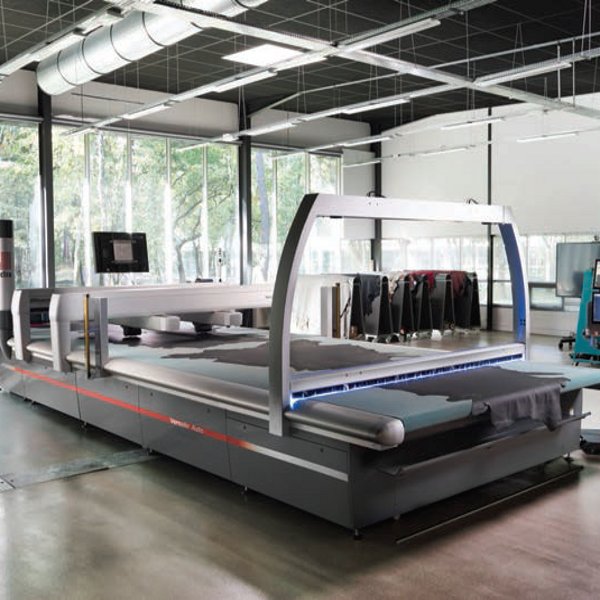 The interior of the Lectra headquarters is a showcase of the company’s technology. 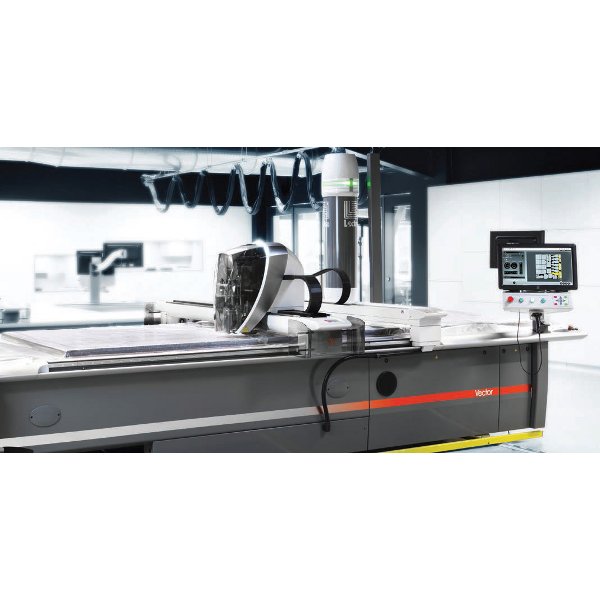