The US hide market started 2020 just as it ended the previous year – fully steady. Through the end of the year, packer remained well sold, although a few weeks of low sales undoubtedly ate into those forward positions. Despite the fact that sellers were well positioned and prices steady, there was nothing in the market able to move the needle upward on sales levels. Sellers worked to get higher prices, but buyers were still very resistant to paying more. Little is expected to change until after the Chinese New Year holiday at the end of January.

Minimal trading was reported on benchmark heavy Texas steers into January. This was mainly because a good amount of supply was going into wet-blue production and the remaining volume was needed to fulfil existing contracts. Prices remained steady with seasonal weights selling for $28. Branded steers, also known as Colorados, were also selling at similar prices around $28.

During 2019, the cow sector was able to clear the significant stocks that had built up and even managed to bring prices up from the year’s lowest levels. Sellers generally remained in better position in early January with prices having firmed and seasonal average branded cows selling at $8–9 depending on quality. While Holstein steers remained in short supply, the prices being obtained were not increasing by the week as they had through the end of 2019.

According to Cattle Buyers Weekly, the value of beef by-products is still dragging down profits. Also known as the drop credit, 2019 saw these items hit their lowest weekly average level in 10 years. The values averaged $8.88 per CWT last year, down from $9.60 per CWT in 2018. The weekly values have been below $10 per CWT since the week ending 31 March 2018. Last year’s values were also far below the weekly record of $16.69 per CWT set the week of 23 August 2014. The decline has been largely driven by higher cattle slaughter and the depressed global hide market. Hides historically accounted for about two thirds of the total drop credit but now account for only 27%.

While US cattle slaughter continued at high levels through December, by mid-January those numbers had dropped a bit to between 630,000 and 640,000. These are still strong levels; however, they are down from 2019’s highest of 679,000.

The US beef industry started 2020 with ample numbers of cattle in feedlots. Larger than expected placements in November pushed the 1 December cattle on feed total just shy of the record for that date. The 12.031 million head total was 2.5% larger than a year earlier and was only 68,000 head below the 2007 record. The total was up 292,000 head on a year earlier. Feedlots 1,000 head and over placed 2.093 million head in November, up 4.9% on the previous year. Placements were 4.0% above the average forecast. November marketing totalled 1.813 million head, down 3.0% on the prior year but were positive given one fewer marketing day versus a year earlier.

Writing for Drovers, Oklahoma State University’s Derrell Peel notes that changes in several factors towards the end of 2019 suggest a somewhat different tone for markets in 2020. Peel says that beef production is expected to peak fractionally higher in 2020 with heavier carcass weights offsetting a slight decline in cattle slaughter. Carcass weights finished 2019 above year-earlier levels and will bear watching in the coming year. Total US meat production will once again push to new record levels in 2020 with beef, pork and poultry all at or near record levels.

Tyson Foods’ Finney County, Kansas, plant was shut down in August due to a fire, but was able to reopen in December. The fire severely damaged a critical part of the plant containing the hydraulic and electrical systems that support the harvest floor and cooler areas. After the fire, cattle were diverted to the company’s other beef facilities, and the company has continued to pay active, full-time team members for 40 hours per week.

One of the landmark events for the start of 2020 was the signing of a ‘phase one’ agreement between the US and China in the ongoing trade dispute between the two nations. Under the agreement, China has committed to purchase at least $80 billion in US agricultural products over the next two years. China, however, has not committed to removing any of the retaliatory tariffs on US imports as part of the phase one agreement, but given the large commitments it made regarding purchases from the US over the next two years, the existing tariffs may have to be addressed, and possibly removed, in order for those commitments to be met. President Trump also noted the US would not impose additional tariffs on Chinese imports, as the two countries move to negotiate a phase two agreement. A significant number of Chinese leather imports to the US were exempted from additional 15% tariffs after the US indefinitely suspended a tariff hike, originally scheduled for 15 December 2019.

The US hide and leather industry consolidated its representation at the start of the year. Effective 1 January, the Leather Industries of America (LIA) and the US Hide, Skin and Leather Association (USHSLA) joined forces, launching the Leather and Hide Council of America (LHCA), a new, stronger industry association for the US leather sector that combines the membership, expertise and resources of its predecessor organisations. With the formation of LHCA, the US leather industry is better positioned to be a leader in the global leather sector with one collective voice. The merger was the result of a yearlong effort to bring the two associations together. Former USHSLA president Stephen Sothmann assumes the helm as president of LHCA.

A year to remember

Speaking of the hide industry as a whole, 2019 may go down in history for many as a year to forget. Unfortunately, for some more than others, it will be a year they will always remember due to misfortune.

Certainly, leather business was lacklustre for more than just this calendar year. Witnessing North American cattle hide prices as a measure of the leather market, one can see this more clearly. Since benchmark Texas steers crested at over $100 per piece FOB in 2013, this selection has been under pressure until about week 20 of 2019, when they hit a low of around $20. This was below even the levels of the horrible debacle days in 2008–09. Thankfully, prices have gradually firmed to their now relatively stable basis of about $28.

As dismal as it may seem, the data on Texas steers is rosy when compared with low-end selections such as renderers, small packers and processor. While official record-keeping is lacking in these ‘under-theradar’ selections, the downward spiral witnessed in 2019 has been shocking. Using fleshed seasonal average small packers as an example, these hides traded as high as mid-$70 per hide FOB in 2013 and early 2014. Entering 2019 these same hides could be sold at about $30, but the bottom fell out in an unprecedented manner. By the summer of 2019, locker plants actually had to pay to dispose of them.

This situation has not improved much, if at all, until now. In fact, on a worldwide basis, it is now estimated that millions of low-end hides were dumped or buried in 2019.

“Effective 1 January, the Leather Industries of America (LIA) and the US Hide, Skin and Leather Association (USHSLA) joined forces, launching the Leather and Hide Council of America (LHCA), a new, stronger industry association for the US leather sector.”

Packer concentration has long been a trend in the industry and this didn’t change much in 2019. The top four packers still comprise over 70% of the federally inspected slaughter and the top 10 account for almost 85% of overall USDA slaughtered cattle. The subtle-but-real concentration in export tanning destinations for US hides seems more pronounced. The top four buying countries of US cattle hides (China, South Korea, Mexico and Thailand) accounted for 94% of export sales in 2019 as of 5 December. Similarly, in US wet-blue cattle hide export sales, three countries (Italy, China and Vietnam) accounted for 75% of the overall export sales total.

So, while leather continues to battle for market share by redefining itself versus its competition, the industry waits for some trend in leather that will capture the imagination of consumers. Seasoned veterans maintain that what goes around will come around and that leather will be back in favour one fine day. 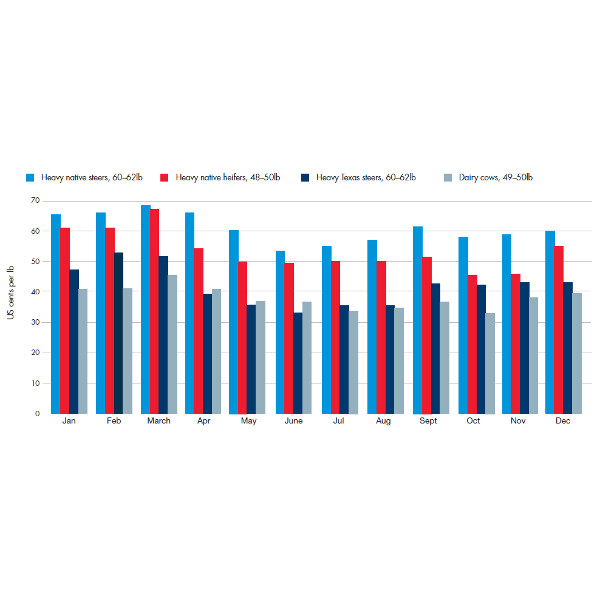 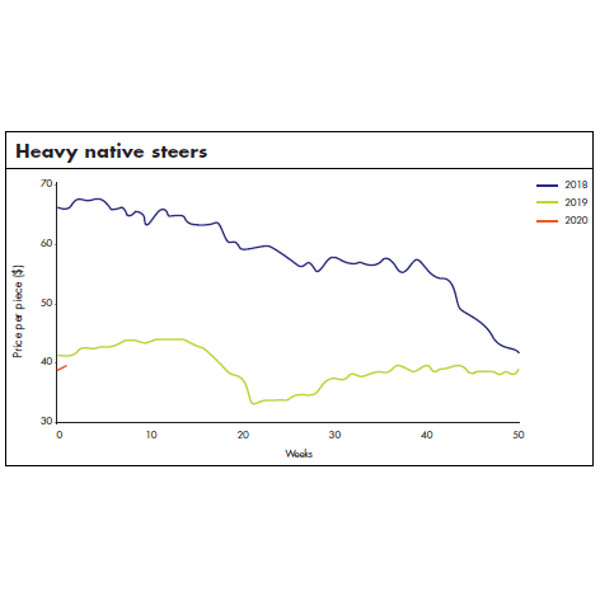 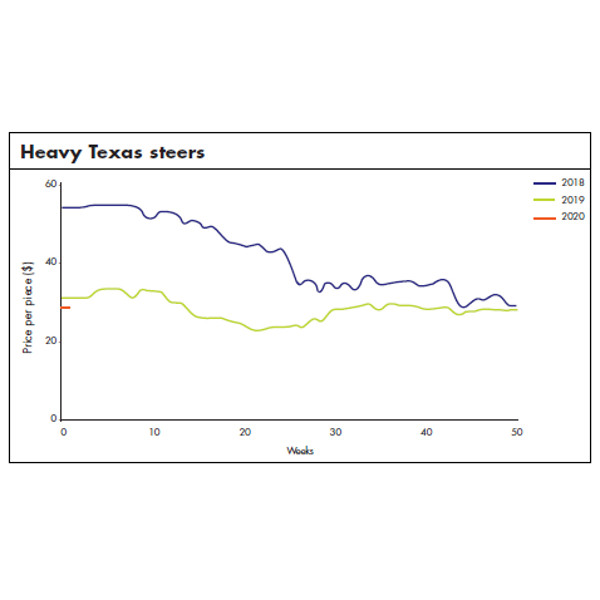 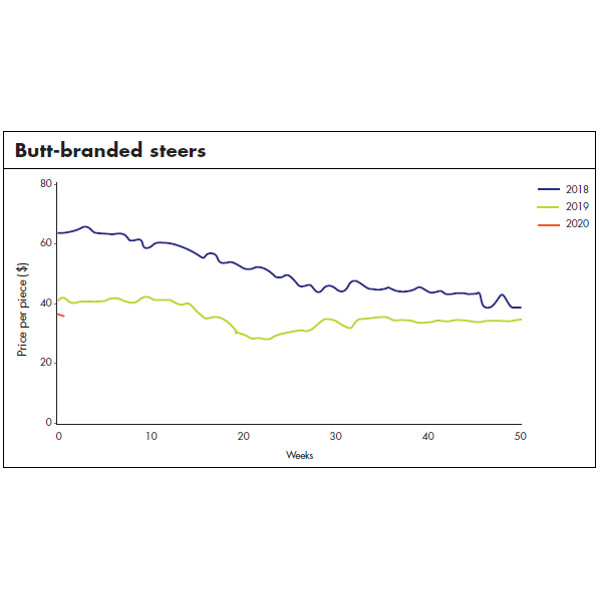