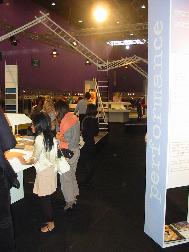 Leathers on show in Paris, both in the trend area and on the stands, were for the autumn/winter 2010/11 season and most of Europe's leading footwear, leathergoods, gloving and garment leather producers exhibited at the show. As well as the Italian and French presence there was also a significant number of tanners from Spain, Brazil and Turkey in attendance.

‘We were busy throughout the first three days of the show', commented Ruken Gunduz, partner, RG Deri. ‘This is the only show we attend outside Turkey and we are happy with the high level of designers and buyers visiting the stand. We have met many from the US and Europe and even some of our Russian clients are here looking for lightweight lambskin leathers', she explained to Leather International. RG Deri were part of a group of Turkish exhibitors looking to meet expand their client base out of Turkey and Russia which have been particularly hit by the financial crisis this year.

Some exhibitors were a little unhappy with the clash of dates with the Anteprima show in Milan and were dashing from one show to the next with Lineapelle only a further three weeks off. With Lineapelle looking to move to earlier dates in 2010 it looks like the competition for European exhibitors is building-up. ‘Although we are selective about our exhibitors we are less selective than Anteprima and we are not really wishing to compete with Lineapelle', Rousseau told Leather International. ‘We have some capacity to expand here but our aim is maintain an exhibition of medium/high level exhibitors and attract leading stylists, designers and leather buyers', she added.

The next edition of the show will take place in hall 4 of the same venue, February 9-12, 2010. A full report on the autumn/winter 2010/11 fashion colours and leather trends will appear in a forthcoming edition of Leather International magazine.