The 18th UNIDO Leather and Leather Products Panel meeting began on September 1 at the Rainbow Hotel in Shanghai. The panel is made up of leather and footwear industry professionals and consultants from around the world.
Hot topics on the agenda on day 1 were a statistical update of the leather and leather products industry in China presented by CLIA Chairman, Su Chaoying and a presentation of a paper on carbon footprint and life cycle analysis given by UNIDO Consultant, Federico Brugnoli.

Around 65 delegates from around the world are attending the meeting to update and review the work of UNIDO in the leather and footwear industries. The meeting takes place at a different venue every two years. It was the second time the panel was hosted in China following the first panel held in Beijing in 1980.

Addressing delegates, CLIA Chairman, Su Chaoying said that China's GDP growth was expected to be downgraded to 7.5% in 2012 and that in 2011 850 million sq m of leather was produced and 150 million sq m was imported. He said that the overall leather and footwear industries in China currently employ five million people.

In 2011 China produced 13 billion pairs of shoes of which 4.27 billion contained leather. From the total number of shoes produced, 3.35 billion were sold directly on the domestic market.

During the afternoon session on September 1 an interesting paper was given by Federico Brugnoli, UNIDO consultant who has been working with the Italian tanners association, UNIC investigating the boundaries for the leather industry when it comes to measuring and accounting for the carbon footprint in leather.

Discussion among panel members, generally accepted the basis that the tanning industry should accept the carbon footprint of leather at the point of slaughter to the point that it leaves the tannery door (including any waste from the leather making process). Leather should be regarded as a waste product from the meat industry.

The panel also broadly agreed that leather should be regarded as a byproduct of the meat industry and is not a co-product.

Further discussions and presentations will take place from September 1-6 including factory visits to the Shanghai Richina tannery and the Haining Leather City as well as a visit to the ACLE which takes place, September 4-6. 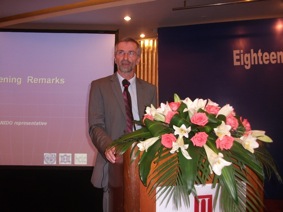