Based on a presentation given at Lineapelle in October, Dr William Wise, senior lecturer in leather technology at the University of Northampton, addresses some lingering concerns about chromium (VI) in light of new proposed EU legislation.

The issue of chromium (VI) in leather has been debated for many years, but its significance has recently been raised due to newly proposed European legislation.

The European Chemicals Agency (ECHA) has proposed that the limit should be lowered from its current 3ppm (parts per million) cap to 1ppm, so that the leather industry is in line with the textile industry. While the textile industry uses little chromium, mainly in dyestuffs, the leather industry faces detecting 1ppm of chromium (VI) in a background of 20,000–40,000ppm of chromium (III).

A project to review the current status of chromium (VI) analysis in leather was jointly funded by the Worshipful Company of Leathersellers and Leather UK, conducted at the Institute for Creative Leather Technologies (ICLT) by Dr Stefan Davies and led by myself. The focus was narrowed when the project team identified possible sources of error in the standard method (BS EN ISO 17075) used for chromium (VI) determination.

In the above-right figure, the solid line depicts 50% error and the broken line represents the error in the actual mean values. It is widely acknowledged that greater than 50% error in the mean value is unacceptable, as it renders the results statistically unreliable – therefore the point at which these lines cross is the limit of detection for the method. Consequently, and perhaps most importantly, the standard method itself provides rigorous evidence that lowering the limit below 3ppm would render the colourimetric method meaningless (a point supported by the ICLT’s recent findings).

Other findings have compared analytical methods, which further highlight the issue. In these cases, has the leather passed or failed? Just because the mean value is above/below a threshold is not the final point because the error also must be considered. Imagine if the new limit of 1ppm is imposed – what then? The percentage error will only increase, leaving an unacceptable situation where one could have a value of 1ppm.

Findings highlight the issues with the colourimetric method, but also suggest that the supposedly more accurate chromatographic method is also not capable of testing to a limit of 1ppm – despite the analytical technique having greater sensitivity. The team at the ICLT has identified several ways that will improve the methodology and could reduce the error observed between samples and test houses.

These changes will be put to the European Committee for Standardisation for inclusion in future updates of the standard. If adopted, these changes will improve the reliability of results but are unlikely to allow the colourimetric method to remain as a viable method for measuring the lower 1ppm limit.

The ICLT will be submitting a response to the consultation on the proposed legislation changes, explaining the fundamental inability of the current test methods to reach such low levels of detection reliably. This submission will be supported by Leather UK, which will separately examine the impact on the leather manufacturing industry. 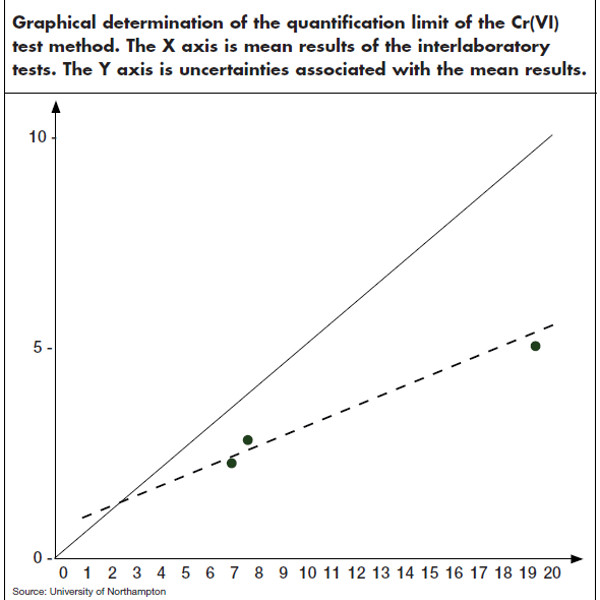 Graphical determination of the quantification limit of the Cr(VI) test method. The X axis is mean results of the interlaboratory tests. The Y axis is uncertainties associated with the mean results. Source: University of Northampton
Post to: