Comparing commercial and analysis-grade chemicals in the preparation of the chromium-melamine syntan, the following study, conducted by industry experts CSIR-CLRI and Sellam Chemicals, showcases the outcomes caused by common and experimental chemical treatment of hides.

One of the unavoidable steps in the transformation of wet-blue to finished leathers is the filling of void spaces in the skin matrix. As a drawback associated with chrome tanning, lack of fullness is being addressed during the post-tanning process by employing synthetic tanning agents. In general, the syntans are manufactured by enhancing the molecular weight of aromatic compounds such as phenol and its derivatives, such as melamine, through condensation reaction. Commercially available chromium syntan, which contains a combination of chromium salt and phenol formaldehyde condensate polymer, is employed during the rechroming process to ensure the uniform chromium content of wet-blue leather sourced from different places and also to impart fullness.

However, in order to improve belly filling, a larger quantity of melamine formaldehyde condensate is needed for the subsequent retanning process. Liberation of free formaldehyde is one of the major limitations of the conventional synthetic tanning agent. Keeping in mind the strictures of free formaldehyde and selective filling, an attempt has been made to prepare a novel formaldehyde-free chromium melamine syntan (CMS). The prepared product has been used in the rechroming process. The product imparts a selective filling and grain-tightening effect on loose areas and also increases the thickness without affecting the area yield. The product provides good dye levelling, excellent buff ability with a sheen, uniform milling pattern and – apart from the upgradation of lower selections – improved cutting value.

The hides used for leather manufacturing are anisotropic in nature. Removal of non-leather-making materials such as elastin, reticulin and proteoglycan, plus carrying out various other chemical operations on hides, further increases the anisotropicity. The economic value of the final leather strongly lies in the homogeneity of the substrate. Usage of vegetable tannins in leather-making provides tanning cum-filling action thereby increasing the homogeneity of the substrate. However, 90% of the leather is made by using chromium salt due to the limited availability of vegetable tannins. Though chrome-tanned leathers are superior to vegetable-tanned leathers in terms of hydrothermal stability and mechanical property, the substrate homogeneity is not obtained during the chrome tanning process. In commercial language, tanners generally believe chrome-tanned leathers are empty in nature. The leather industries, in countries such as – but not limited to – India, carry out an operation called rechroming in order to normalise the chromium oxide content in the batch of wet-blues.

The chromium syntan used during the rechroming operations is a masked chromium salt, wherein chromium ligand complexes are coupled with condensed aromatic sulphonates. In such syntans, the preferred aromatic compound is the phenol or naphthalene and the condensation is carried out in the presence of formaldehyde as cross-linker. Use of this chromium syntan results in the reduction of aromatic syntans in subsequent post-tanning.

In the case of ill-fed animals, preferential belly-filling is achieved in the retanning stage through use of melamine formaldehyde condensates. A survey of the leather chemical market indicates that melamine formaldehyde products are devoid of metal ions. This forces the tanner to employ a variety of aromatic condensates to achieve the desired fullness. Through this study, the ability of such a product to perform multiple function, such as normalisation of chromium content in a batch of wet blue, as well as the capacity to obtain improved fullness of the belly owing to the use of CMS, is evaluated.

Differentiating between commercial and analytical

Melamine was mixed with 600–1,000% (v/w) of water and the resulting solution was heated to a temperature in the range of 7,590°C for a period of 15–60 minutes, stirring to obtain melamine dispersion. Next, 35–110% (v/v) of organic acid was added to this solution while stirring. This was followed by the addition of 45–150% (v/v) of formaldehyde-free cross-linking agent. Stirring continued for a period in the range of 30–120 minutes to obtain transparent pale-yellow colour solution. The pale-yellow solution was then allowed to settle for a period of 15–60 minutes, until the solution turned dark orange.

Chromium salt was dissolved in 500–1,000% (v/w) and the solution treated with 5–50% (w/w) of organic ligand at a temperature in the range of 70–90°C to obtain masked chromium salt solution. This solution was reacted with 0.1–1.0% (v/v) of the transparent dark orange liquid at a temperature 80–90°C for a period of 5–30 minutes to obtain melamine-chrome complex liquid. This liquid was spray-dried. The developed product could be represented by the general molecular formula (CxHyN6Oz) n-Cr, ‘x’ being an integer ranging 5–9, ‘y’ an integer between 8–12, ‘z’ an integer between 2–6 and ‘n’ an integer between 10–50. The product is described in the subsequent text as CMS.

The prepared CMS was characterised for various properties such as pH, moisture content, total soluble matter and chrome content, as per the standard procedures. Particle size analysis of the sample was also carried out using a Malvern Zetasizer and was compared with that of the commercially available chrome syntan.

In order to evaluate the developed CMS, four wet-blue cow hides having the thickness of 1.1–1.2mm were cut into two halves along the backbone and marked accordingly. These halves were grouped separately and their weights noted. Left halves were treated with commercial chromium syntan and right halves were taken for the experimental process in which developed chromium melamine formulation was used as the retanning agent.

The two hides were analysed for various organoleptic properties such as fullness, softness, grain tightness, grain smoothness and roundness by experienced persons from the industry. They were rated on a scale of 1–10, where higher points indicate better properties. The physical properties such as tensile strength, percentage elongation at break, tear and bursting resistance were examined for control and experimental leathers. The specimens for various testing as mentioned above were obtained as per the IULTCS standard method. Specimens were conditioned for 24 hours, at 25 ±1 °C and 65 ±2.0% RH.

Samples from control and experimental crust leathers were cut from the belly portion and coated with gold using an Edwards E306 sputter coater. A Quanta 200 series scanning electron microscope was used for the analysis. The grain, as well as cross section, was examined under the microscope at varying magnifications. The micrographs were obtained by operating the SEM at a voltage of 30kV with a different zoom level.

The spent liquor after rechroming and basification was collected from control and experimental trials and the volume was noted. The liquor was filtered and subsequently analysed for chromium content, total dissolved solids and chemical oxygen demand, as per standard procedure.

CMS was prepared by condensing melamine without using formaldehyde as cross-linking agent, and the prepared melamine condensate was co-linked with masked chromium sulphate. The prepared CMS was used in the rechroming of wet-blue cow leathers and this product has the dual benefit of having chromium and melamine linked together as a single product so that retanning with chromium and filling of looser portions by melamine could be achieved at the same time. During spray drying, an amount of sodium bicarbonate was required to be added to the liquor in order to bring the final pH of the 10% solution of CMS to be around 3.5 ±0.5.

CMS has a moisture content of 10.3 ±0.4%, pH (10% solution) around 3.5 ±0.5 and Cr²O³ content of 12 ±0.5%. Particle size analysis results are depicted in the figure. The intensity average diameter of CMS was observed to be around 2,616nm and the particle size of BCS and commercial chrome syntan was also analysed and observed to be 1,813 and 1,644nm, respectively. Thus, it could be inferred that owing to complexation with melamine, CMS has higher particle size compared to conventional BCS or commercial chromium syntan. This could probably lead to improved belly-filling and firmness of the final leather.

Lessons learned from conducting the study

Crust leathers rechromed using CMS have been characterised for physical and organoleptic properties. Tensile, elongation percentage, tear strength, load at grain crack and distension at break for the control and the leathers processed CMS were evaluated, and it could be observed that the physical properties of leathers rechromed with CMS were on par with that of the control leathers and the values were higher than those of standard norms.

It was clearly observed that the crust leathers that were re-chromed using CMS showed better belly-filling and improved firmness compared with leathers rechromed with commercial chrome syntan. Also, both leathers had good colour uniformity and there were no colour patches or yellowness found.

In this work, CMS was prepared and used to rechrome wet-blue cow upper leather. CMS had a characteristic chromium oxide content of 12 ±0.5% and the salient features of the leather treated with CMS resulted in a product that:

The CMS rechromed wet-blue cow hide showed more apparent firmness than the leathers that were rechromed with commerical chrome syntan. Both leathers displayed great coverage, but tests show that CMS has undeniably superior qualities against the commercial chrome syntan. 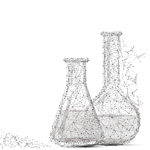 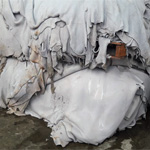 One half of the wet-blue cow hide was treated with commercial chromium syntan and the other with an experimental chromium-melamine formulation. 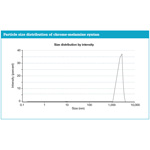 The intensity average diameter of CMS was around 2,616nm. The particle size of BCS and commercial chrome was also analysed and observed to be around 1,813nm and 1,644nm, respectively.
Post to: