Formaldehyde in leather products is a problem for tanners. While traditional techniques yield mixed results to reduce its presence, new research, explained to Ross Davies by Sara Cuadros of the Spanish National Research Council, suggests dyes might be the way forward.

Speaking at the Freiberg Leather Days conference in June, Sara Cuadros of the Spanish National Research Council referred to the presence of formaldehyde in tannery operations as “not a minor problem”.

In some ways, such a statement is hardly novel. The dangers of the chemical have been on the industry’s radar since 2001, when the Washington State Department of Labor and Industries pointed to a connection of its presence in leather articles with increasing cases of dermatitis.

Further studies from other agencies have since concluded that formaldehyde derivatives can indeed cause skin allergies and breathing difficulties.

“Consequently, the presence of formaldehyde in leather should be below the permitted limits,” said Cuadros.

Formaldehyde content in leather is an ongoing concern. According to a recent internal report of activities at the A3 Chair in Leather Innovation at the Polytechnic University of Catalonia (UPC), 16% of analyses carried out on leather footwear items from Asia revealed formaldehyde content higher than 75mg in every kilogram.

This means 16% of leathers are failing the requirements of major brands. Double-face skins – also from Asia – fared even worse, with nearly 30% of all samples analysed at the UPC’s in-house laboratories containing a formaldehyde content of more than 75mg/kg.

Presently, the International Organization for Standardization (ISO) includes an official standard, ISO 17226, which is used to determine formaldehyde content in leather.

It is comprised of three parts. The first is quantification through high-performance liquid chromatography (HPLC); the second concerns quantification through colourimetric analysis, in which the extracted formaldehyde is reacted with acetylacetone, resulting in a yellow compound; the third constitutes the determination of formaldehyde emissions from leather, but applied less than the first two.

The main application of formaldehyde in tanneries occurs during the retanning process, in which it participates in the synthesis of two groups of synthetic organic tanning agents: syntans and resins. The former are based on the condensation of aromatic compounds, such as phenols or naphthols, with formaldehyde, while resins are condensation products between formaldehyde and the likes of amines, amino acids and cyanamide, which are susceptible to partial hydrolysis and release formaldehyde. When used in the form of resins – together with the partial reversibility of the synthesis reaction – formaldehyde is released.

Formaldehyde also features in other tannery operations, such as in the ironing of wool in the furriery, and as a preservative of chemicals in the wet-end operations.

As a result, according to Cuadros, “It is of paramount importance to have reliable analytical methods and to find measures to diminish the formaldehyde content in leather below the permitted limits.” Reducing formaldehyde in leather has traditionally been tackled through the likes of protein and scavengers – but with mixed success.

Along with her team of researchers, Cuadros has also studied the effect of polyphenols contained in some vegetable extracts on the reduction of formaldehyde in leathers that have been treated with resins synthesised with formaldehyde.

According to her research, “the high reactivity of the polyphenols of the mimosa extract led to the highest reduction of the FM content and this capacity was accentuated with ageing”.

Cuadros also used her presentation to reveal the results of a new study, which looked at the influence of four different dyes on the formaldehyde contents of wet-blue split leather treated with different resins.

“Different treatments with wet-blue split leather were carried out by applying a general recipe,” explained Cuadros. “Treatments differ only in the type of dye applied.”

The test material was butts of wet-blue splits, shaved to a thickness of 1.5mm, which were supplied by Spanish group Despell. The splits were chosen, Cuadros revealed, due to having the greatest possible homogeneity in the leather substrate. “The idea was that working with 1.5mm splits would facilitate the penetration of chemicals in the different treatments,” she revealed.

The formaldehyde content of splits dyed with Acid Red 337, Acid Brown 83 and Direct Black 168 was almost constant over time.

Working with different types of formaldehyde resins – melamineformaldehyde or dicyandiamide-formaldehyde – the results were similar. Those obtained with the chromatographic method followed the same trend as the colourimetric method.

While producing “very good results”, the use of dyes to reduce formaldehyde content is, Cuadros clarified, still very much a work in progress. And her research team – which is funded bt Spain’s Ministry of Economy and Competitiveness – hasn’t finished with examining the potential of vegetable extracts.

It is of paramount importance to have reliable analytical methods and to find measures to diminish the formaldehyde content in leather below the permitted limits.

“We are looking at the use of vegetable extracts – such as mimosa, quebracho and tara – on the reduction of formaldehyde content in leathers treated with different formaldehyde-based resins of different origin,” said Cuadros.

It might be early days, but such research will be welcomed by the leather industry as it looks to rid itself of a long-standing burden. 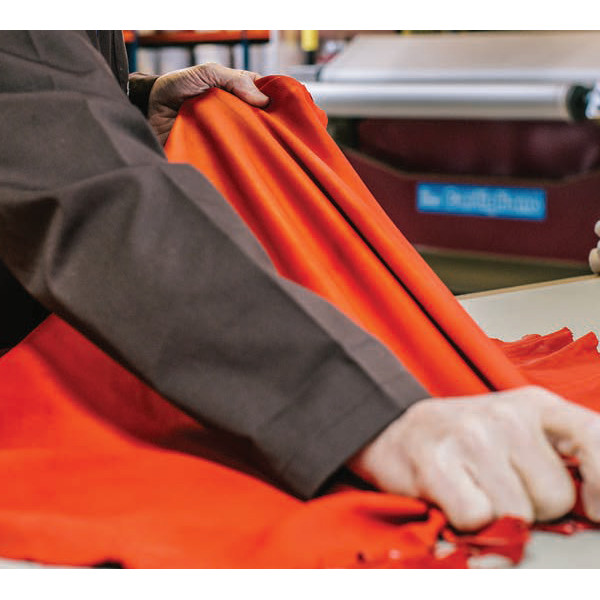 The use of dyes in the tanning process shows promise as a means by which to reduce the current reliance on formaldehyde.
Post to: