Jin Li-qiang and associates from Biosk Chemicals discuss the results of a study into recycling technology for unhairing-liming and tanning waste water.

Recycling technology is one of the most important ways to realise clean production in the leather industry. In this study, a novel closed recycling technology of unhairing-liming and chrome tanning waste water has been applied in mass production scale in a well-known local Chinese tannery. In the recycling process, the content of various ions and total organic carbon (TOC) of the waste water were measured. The collagen fibre dispersion and the distribution of ions in pelts were characterised, and the shrinkage temperature and mechanical properties of leather obtained by the recycling technology were also tested.

All the trials showed that the novel closed recycling technology worked well without impairing the quality of the resultant leather, and that zero emissions of unhairing-liming and chrome tanning waste water were realised. In the unhairing-liming step of the novel technology, the dosage of water, sulphide and lime was reduced by 80.8%, 33.3% and 23.4%, respectively. The collagen fibre bundles of limed pelts were split well. The distribution of calcium (Ca) ion and sulfion in limed pelts was more uniform.

As much as 70% of salt and 20% of chrome tanning agents could be saved by recycling chrome tanning waste water. The shrinkage temperature of wet-blue from different recycling times (from the first to the 30th) was all above 100°C. With increased recycling times, the grain surface colour of the wet-blue tended to be similar. Furthermore, the mechanical properties and yield of the leather in the recycling technology were improved.

According to the principle of this technology from Biosk, the closed cycle technology of unhairing-liming and chrome tanning waste water in the production of cattle shoe leather was investigated.

The aim of this research is to explore the technical points of the recycling technology of liming and tanning waste water, and evaluate the effect of the process and the quality of the obtained products.

The chemicals used in the experiment were as follows: Na2S, NaHS, lime and chrome powder were industrial grade. Degrease agent AN-C was supplied by Lanxess. The liming auxiliary DOpro and ELIPO, fungicide DK and basifying agent BE were supplied by Biosk, and lime dispersing auxiliary CR-2 was purchased from American BK Company. Also, the dosage of chemicals was calculated according to the weight of salting hide.

“Because of the restriction of the experimental conditions, only 80% of the liming waste water was collected and a certain amount of sodium sulphide as well as the lime was supplemented in each recycling.”

The sample of liming waste water was first precipitated. After natural sedimentation, 500ml of the waste water of different recycling technology was filtered twice by double layer gauze. The filter liquor was then taken for analysis, and the content of sulphide in the waste water was determined by filtration and iodimetry.

The leather sample was then ashed at 550°C and the 1:1 hydrochloric acid was used to resolve the ash, and then the sample was diluted. The titration process was similar to the determination of Ca in the waste water.

The limed pelt was dehydrated four times overnight by 100ml ethanol and drying for 24 hours at 40°C. The grain and vertical section of the dried samples were analysed by super depth of a field microscope and by environment scanning electron microscope. The tensile strength, bursting strength, tear strength, contents of Cr2O3 and other related properties of the finished leather were also tested according to further Chinese industrial standards.

In this recycling experiment, the weight of leather was about 10t every time. The dosage of water, sulphide and lime was reduced by 80.8%, 33.3% and 23.4%, respectively, and in the whole process, the waste water discharge was zero. Compared with the normal craft, the pelt obtained by this recycling technology was evenly swelled. The pelts also showed a clean surface and an obvious weight gain.

30%
The amount it is possible to decrease COD and BOD5 by when applying methods such as hair-save liming.
UNIDO

With the increase in recycling time, the TOC of waste water increased due to the dissolution of organic material. After recycling four times, the TOC of waste water tended to be constant; furthermore, the viscosity of liming waste water did not tend to thicken. These might be attributed to the hairpersevering technology. In the hair filter process, part of the organic material would be absorbed into the shedding hair and then filtered out by the recycling system – so the recycling process could be carried out.

“With the increase in recycling time, the TOC of waste water increased due to the dissolution of organic material.”

85-90%
The estimated amount of all leathers in the world that are chromium III tanned.
Cotance

The solubility of lime is limited, so the pH of saturated lime solution is in the range of 12–13. The mild liming condition makes the alkaline swelling slow and uniform. The operable and safety of lime swelling are attributed to the chemical property of lime.

The morphology of grain of limed pelt was investigated in super depth by the field microscope. The results indicated that the hair of two pelts was removed thoroughly and the hair pores were both clearly visible. This meant the hair root was also removed thoroughly. So the recycling technology of liming wastewater was safe and reliable.

Indications show that the Ca content of the grain layer and flesh side was higher than that of the middle layer. After being recycled four times, the distribution of Ca was uniform in the whole vertical section of limed pelt. This might be attributed to the existence of a large amount of organic material in the recycling liming waste water. The swelling process was assuasive but the liming process was more uniform. As a result, the penetration of Ca was better. The ‘S’ distribution in the samples from the conventional technology and the fourth recycling process were similar. This might be attributed to the solubility of sulphide since the penetration property of sulphide was higher than lime. 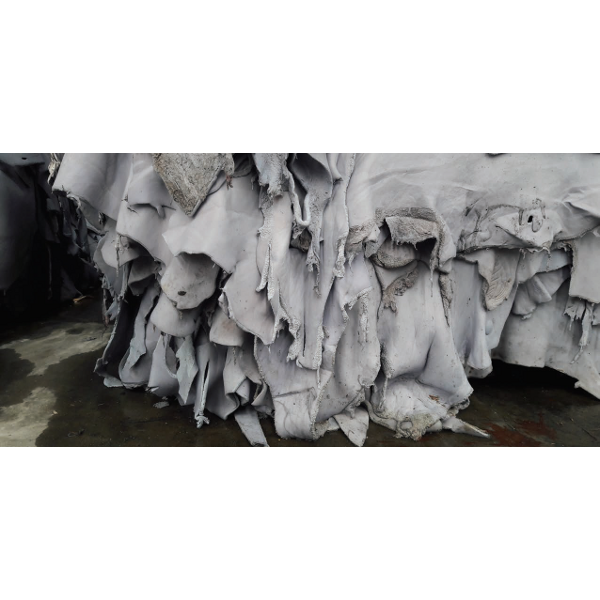 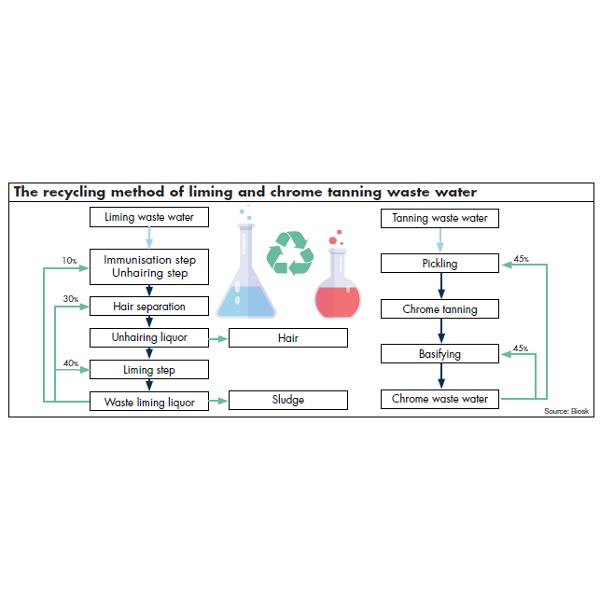