All eyes on Hong Kong with focus on APLF

In March, and two weeks earlier than usual, esteemed leather trade show APLF returns to give industry insiders the low-down on major trends, as well as opportunities to network and partake in leading educational seminars. Guests will also be able to source from every area of the leather supply chain, including design, tanning and dying. Leather International takes a look at the upcoming event and presents a guide to some of the exhibitors on show.

For the 34th edition of APLF, organisers decided to bring the show forward by a couple of weeks, holding it on 14–16 March at the Hong Kong Convention and Exhibition Centre. For many, this change will prove beneficial as it won’t encroach upon Easter holiday plans. From a production standpoint, APLF directors say that the date change will favour suppliers and manufacturers as well.

“The decision to bring the days of APLF forward to mid-March was taken after careful consultation with exhibitors and buyers,” said APLF director Perrine Ardouin in a statement. “Bearing in mind that fashion is one of the main drivers behind quality leather and other luxury materials, brands and customers will have similar demands for sustainability and traceability. Hence, there is mutual synergy not only between Cashmere World and Fashion Access, in terms of complementary fashion accessories, but also between Cashmere World and APLF Leather & Materials+.”

As a result, all three events will be held together at the same location, so they complement one another, with APLF being the focal point. The prestigious trade show will also enable professional buyers to source the supplies, materials and components needed to manufacture new designs in time for the 2018 winter season.

As well as changing the date, APLF’s organisers have also had to cope with an increased demand for exhibition space. This is in spite of the fact that leather, since 2014, has lost much of its market share to synthetics, especially in footwear manufacturing. Over the past few years, the upholstery and automotive sectors have helped to buttress the industry.

At the end of 2017, leather prices reached their lowest levels since the market collapsed in the wake of 2008’s recession. The general consensus is that prices were impacted by the oversupply of hides, most notably from the US, and in December 2017, there was an estimated five million hides languishing in warehouses, waiting to be shipped to their final destinations. As it stands, prices are yet to make any notable recovery, but there are still plenty of opportunities to take advantage of, especially at global gathering points like APLF.

Based on the current supply and demand paradigm, lower prices should stimulate acute demand from designers and manufacturers, as prices for oil, which is used to produce the synthetic materials that compete with leather, are now over $62 a barrel for the first time since 2014. This has made the leather industry far more competitive, and could prove to be a strong catalyst for growth.

Bringing the world’s industry leaders together

At APLF 2018, there will be more than 800 exhibitors from 46 countries, and visitor numbers are expected to surpass 17,000. The Chemicals/Allied Materials for Tanning section will have a lot of familiar names standing shoulder to shoulder with some new faces, including Gulec Chemicals, Kenda Farben Hongkong and Uniters.

In order to cater to the entire supply chain of components for leather goods and footwear manufacturing, Materials+ returns after its successful launch in 2017. This year, the Materials+ Hall has attracted even more shoes components and functional materials exhibitors.

APLF will also welcome Egypt back to the national pavilions alongside many others countries, such as new-comer Sudan, which will have five organisations participating in the show: African Leather Factory, Al Amatong Tannery & Leather, Rubatan Tannery for Skins Products, Hyderco Enterprises for Import & Export, and the Sudanese Hide and Skins Exporters Union of the Sudanese Chamber of Commerce. Together, they will collectively reveal the magnitide of the country’s rich livestock, and potential to export semi-finished raw materials for making finished leather for shoes and leather goods.

Highlights to look forward to

In order to cater to the entire supply chain of components for leather goods and footwear manufacturing, Materials+ returns after its successful launch in 2017. This year, the Materials+ Hall has attracted even more shoes components and functional materials exhibitors, such as Plaginsa and Lenzig.

Additional highlights will see APLF continue to hold satellite events and seminars that happen outside the main halls. Another event to look forward to is the half-day Global Footwear Retail Conference (GFRC) that has been organised in conjunction with the Footwear Distributors and Retailers of America, which will launch its Material Exchange, an advanced filtering and material visualisation platform.

The GFRC will provide footwear retailers with the ideas, insight and networks to cope with industry’s increasing digitalisation. Staying current is key for business survival and companies can benefit from attending the conference, as it inspires the industry by bringing the brightest minds together to share their knowledge.

Leading companies will attend the GFRC, representing a slice of the industry’s professional federations, trendsetters, designers, material suppliers, equipment manufacturers and technology providers. In addition, experts from the industry will also provide insights, such as Chris Hillyer, director of innovation at Deckers Brands, who will describe how the brand is changing its design and development process to create a sustainable speedto- market advantage. Other influential figures in attendance will include Scott Thomas, vice-president of global sourcing at Wolverine Worldwide, and PTC’s vice-president of innovation, Darren Glenister. All speakers will address the current trends and issues facing the future of footwear retail. 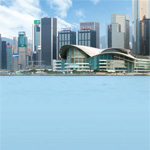 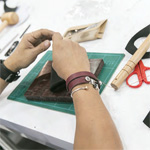 The Hong Kong Convention and Exhibition Centre will host APLF for its 34th edition, where guests will be able to source all of their leather, footwear, garment and upholstery goods under one roof.
Post to: