All eyes on India - the India International Leather Fair

The India International Leather Fair acts as a barometer for the Indian leather industry. This year’s event was an opportunity for the host nation to bolster exports while encouraging inward investment; Leather International considers how it reflected the current economic climate.

As Chennai geared up to host the 32nd edition of the India International Leather Fair (IILF) over 1–3 February, India looked forward to an opportunity to promote its wares and present itself as a market ripe for growth.

The event – which was organised by governmental agency the India Trade Promotion Organisation (ITPO) – hoped to build on the success of last year’s edition, which attracted 12,500 visitors from nearly 70 countries.

All under one roof

The theme for the event was ‘enabling leather’. The rationale behind the slogan, says the ITPO, is to promote “vendor development, backward and forward linkages and explore marketing opportunities”, as well as a greener and more sustainable leather sector.

The ITPO – together with event supporters, including the Council for Leather Exports (CLE) and Central Leather Research Institute – also had an opportunity to put on show its commitment to some of the recent trade initiatives set up by Narendra Modi’s government. They included ‘Make in India’; ‘Digital India’; ‘Ease of Doing Business’; ‘Swachh Bharat’; ‘Start up India’; and ‘Stand up India’.

While India’s export potential was promulgated, IILF aimed to promote the Asian nation as an investment destination, too. In light of Prime Minister Modi’s liberalisation of rules on foreign direct investment in the country since taking power in 2014, India is looking to be seen as a hub for manufacturing, as well as design and information.

IILF 2017 arrived on the back of what has been an eventful, sometimes challenging, year for the Indian leather market. The luxury leather goods market remains on an upward curve. According to Euromonitor International, this year it is expected to reach Rs2,177 crore, which is almost double the value it achieved in 2013.

The success of luxury leather has been contingent on India’s rapidly growing middle class, which associates leather with status; new brands will undoubtedly be looking to enter the fray and exploit such a lucrative market.

High-end consumption aside, India’s tanners could be facing unprecedented demand on a national scale. According to a government statement from 2016, the country will need five billion pairs of shoes in 2020. Present demand is less than half that, so suppliers will have their work cut out in meeting New Delhi’s goal in such a short space of time.

The performance of India’s leather exports has also prompted some concern. According to national reports from last year, India missed its target of $6.25 billion in the financial year 2015–2016. In this period, the country’s leather shipments totalled $5.92 billion, down by 10.11% on the previous fiscal year. Finished goods and the footwear categories suffered the worst, decreasing by 21.00 and 20.88% respectively.

Economic and political turbulence in Europe also have Indian exporters somewhat concerned about the future of what has traditionally been a key market for their products, and accounts for 65% of foreign trade.

In the immediate aftermath of the UK’s decision in June to leave the EU, leather exports fell away by 8% to $451 million the following month.

With the UK – which by itself accounts for 14% of Indian leather exports – having now confirmed its intention to leave the single market, coupled with a volatile pound, recently elected CLE chairman Rafeeque Ahmed has spoken candidly of his concerns.

“This has put leather exporters in a spot of bother,” he recently told Hindu newspaper. “Our main market is the EU, and it is not in good shape. Demand is not picking up,” he added.

With UK Prime Minister Theresa May aiming to trigger Article 50 – the formal notification of the country’s withdrawal from the EU – by the end of March, question marks abound over future trading conditions with the UK.

As highlighted by Ahmed, if the pound continues to fluctuate, customers will be spooked by higher prices. There are also concerns over how the UK will handle immigration (a major theme of last year’s referendum), which could restrict access
to the market.

The success of luxury leather has been contingent on India’s rapidly growing middle class, which associates leather with status; new brands will undoubtedly be looking to enter the fray.

According to A Sakthivel, regional chairman of the Federation of Indian Export Organisations, exporters have already started losing market share on the continent. If tanners are forced to diversify into other markets in limited time, as some are predicting, the news of higher premiums for Chinese exports will be therefore extremely welcome.

With escalating production costs having an adverse knock-on effect on Chinese leather shipments, the CLE has previously spoken of exploiting the situation to India’s advantage.

Speaking at the International Technical Footwear Congress in Chennai in February last year, Ahmed described an opportunity to gain a foothold in the US, a market previously dominated by Chinese exports, and one in which India’s presence is comparatively minimal.

“Markets like the US have been mainly served by China so far, but with the cost of production going up in China, the products from the country are getting expensive, and India has an advantage to export to these countries,” he told reporters.

“We are confident that the future of the leather industry is bright, as there is emerging opportunity both in domestic and export markets,” he said.

The CLE and other leather bodies will surely have appreciated the level of attention that has been paid to the industry by the government.

While identified as a focus sector under the ‘Make in India’ initiative, it was also highlighted in the recent Economic Survey 2017, tabled by finance minister Arun Jaitley.

The report claims the leather sector has the capability to create substantial job growth, particularly for women and minority groups. It did, however, allude to export numbers continuing to struggle at the hands of the limited availability of cattle slaughter in India, a point of controversy due to the cow’s scared status in Hinduism.

The climate at home and abroad is far from ideal for India’s tanners, but there is still a palpable sense of optimism in the Asian nation that leather is a very much a growth market that is worth investing in.

This is the message that the IILF 2017 organisers will hope domestic and international visitors alike will take away with them from this year’s event.

Notable exhibitors at the fair included BASF and Netherlands-based Smit & zoon. The former used its appearance to display high-value products, such as its DryFast beamhouse system, which reduces water consumption, effluents and processing time. It has also been found to bring consistency in leather quality, imparting finer and tighter grain in commercial production.

The group also presented its new range of PVC migration fastness spray dyes, produced in its Mangalore plant. BASF also showed off its new Lepton Anti-static LS, which reduces the electrostatic charge of leather and, in turn, minimises dirt and dust particles in finished products.

Smit & Zoon, meanwhile, sent its wet-end and finishing divisions to Chennai. The latter focused on the company’s Basemark series, a range of products aimed at enabling an easier upgrade of leathers and producing a more natural look. The wet-end team presented two new fatliquors – known as Synthol CH 777 and Synthol GT 616 – designed for making lightweight, ultra-soft leathers, as well as a range of ‘retro-feel; prints. 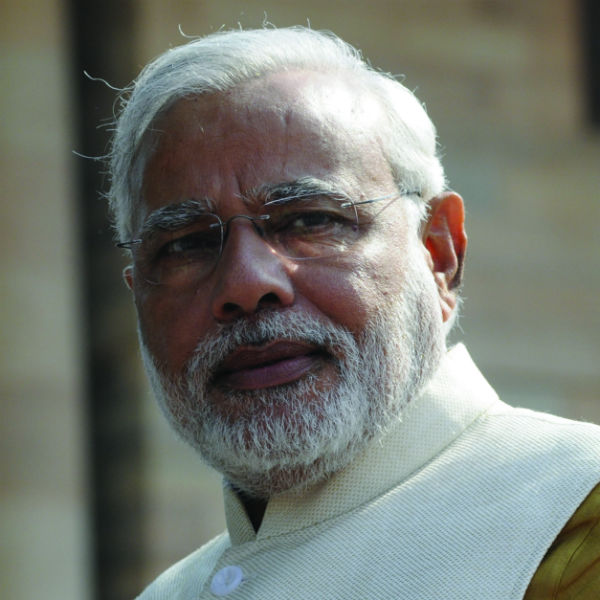 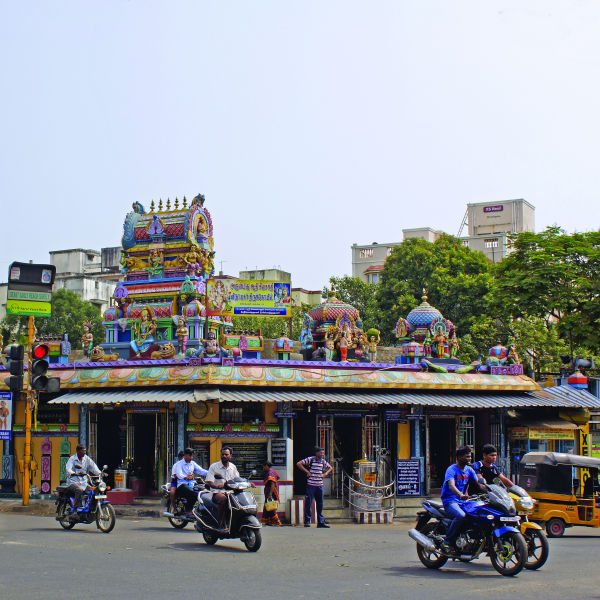 Indian businesses face tough times, but the prevailing spirit in leather is one of optimism. 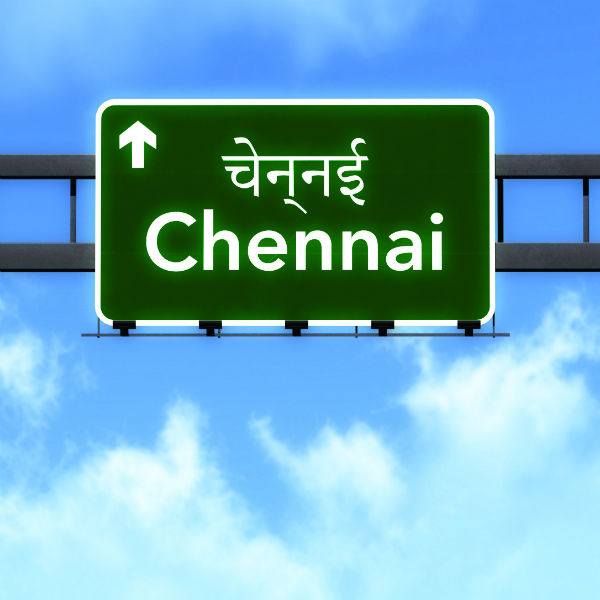 Leather, fashion and commerce converged in India in February. 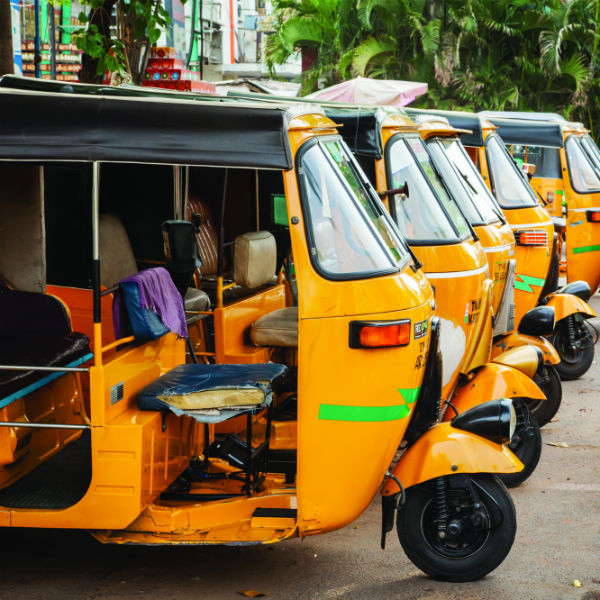 Auto-rickshaws ply their trade in the capital of Tamil Nadu.
Post to: