Leather International visited the Indo Leather & Footwear Expo (ILF) which was held in Jakarta on 3–5 May, and discovered how vital the exhibition is to the country and the South East Asian region overall.

Jakarta is a notoriously steamy city, so the air-conditioned halls of the Jakarta International Expo were a welcome relief, although some of the exhibitors started shivering halfway through the first day. This 13th edition of ILF, the international exhibition in footwear, machinery, leather accessories and components, had a strong three days with about 80 exhibitors from all over the world, including Italy, Germany, China, Pakistan, Thailand and India.

Once again, the hall was shared with the World of Digital Print show, so it didn’t have that undeniable smell or consistency of more dedicated leather fairs in the calendar. However small, relatively speaking, it’s still a vital show for the region. Despite its efforts to cater to everyone throughout the supply chain – from raw materials, semifinished and finished products, machinery, accessories and components – it still is critical for the country to show that it’s willing and able to compete internationally. Some people have their doubts, though, at least in the near term.

Arifin Kustiawan, vice secretarygeneral of the Indonesian Tanners Association, said that the past three or four years haven’t been very good for the progress of Indonesian leather. Like other markets, it is affected by stumbling hide prices and the ongoing shift to synthetics and mixed materials, especially in footwear.

More specifically, production is down and quality of imported cow hides from South America, Australia and India has been inconsistent, even though the overall reputation for Indonesian leather is very high, especially with its own domestic cows. Indonesia also imports sheep and goatskins from Ethiopia and Kenya for its renowned glove production. Brand Indonesia is in decent health and will continue to be a key player, but it’s not on a trajectory that promotes strong optimism. The popularity of the fair is robust as well, but the fact of the matter is that Indonesia still uses old machinery, mostly from Italy, to finish hides, and proper infrastructure is lacking.

There have been focus group discussions to invest more money in leather production and identify specifically where money needs to be prioritised to improve infrastructure, as tanneries are scattered across Java, from Bandung in the west to Jogjakarta in the central region, to the east, as well as in the capital, Jakarta. As a result, Indonesia lacks a cohesive operating model to be able to compete on a global scale, even though more attention is being paid here, as companies look to establish new footprints in a region with low labour costs, a strong skill base and quality leather products.

But according to Kustiawan, leather is not as much a priority in Indonesia as textiles. There’s hope at the Indonesian Tanners Association, however, considering their strong relationship with the Indonesian Association of Industry to move things forward.

Some of the highlights for this year included a cutting-edge display of laser machine technology for the leather goods and footwear industries, as well as a seminar called ‘Learn how to make the perfect Italian shoe: the technical issues of shoe making and design construction’ conducted by Massimo Berta from Modapelle, Italy. Since the fair is supported by Indonesia’s Ministry of Trade, the Ministry of Industry, Indonesian Footwear Association (APRISINDO), the Indonesian Tanners Association (APKI) and ASSOMAC, there is solid backing to keep the fair going. Next year’s, for example, is already scheduled to be a month earlier on 4–6 April.

Ahmar Zafer, of Supreme tannery in Kanpur, was exhibiting at the fair for the first time. He knows the potential of Indonesia. Supreme, which specialises in buffalo leather specific to safety shoes, has had ongoing business here for years, but this year was the time to have a physical presence at the show to help further explore and take advantage of the event. “It’s a growing region and a good time to be here,” he said.

Meanwhile, Sami Nainggolan of Tzeza leather manufacturers, based in Bandung in west Java, is proud of the quality of Indonesian leather. All of Tzeza’s products – mostly bags and accessories – are made in Java with domestically sourced materials. Some of the quality can be inconsistent, just like anywhere else, but it has partnered with a company that delivers reliable materials to work with, which aren’t much different to what it has experienced with imported Italian hides. So, logistically, it makes sense to work in the neighbourhood.

Max Belyaev of Russia’s Ryazan Tannery had just as many questions for Leather International about Indonesia’s leather industry as the magazine had for him about why he decided to exhibit here for the first time. The company is looking to expand sales and if its stand was any indication on day one, that won’t be an issue, as it took several attempts before he was able to speak with us. But expectations are tempered. Ryazan, Russia’s biggest tannery, operates a 55% export business, mostly to Italy, then China, India and Vietnam, and now Indonesia is on the radar to have a secure footing. “We’ll see what will be the result,” he said. “We’re not expecting too much.”

The second day certainly had a greater buzz with more visitors filling the avenues. But depending on whom you asked, the success of a show is also measured in orders made, and by lunchtime, Belyaev wasn’t too impressed with confirmations. He wasn’t convinced there were more visitors on day two, either. Nainggolan, with his stand right at the front entrance and in prime location as people poured in, said that even though they were front and centre, orders were scarce. “A lot of people, but only looking,” he said. Meanwhile, Zafer had inked a couple of deals and was still holding out hope for an increase as day two went on.

At the other end of the hall was Gruppo Mastrotto’s booth. It has had a presence at ILF for years, and in Indonesia for 14 years. But sales area manager Peter – many Indonesians go by only one name – said that while this is an emerging economy and has gained some spotlight in terms of quality production, investor interest and buying power isn’t here yet, despite the money being readily available.

Mastrotto imports raw materials from India and Brazil, then finishes them here before mostly exporting to China, which accounts for about 60% of the company’s output, which is nearly six million square feet a month. The overall trend for the industry seems to be going upward, said Peter, but the fair is flatter than last year. The Indonesian Tanners Association was among many groups to support the fair. 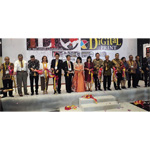