The 43rd edition of Fimec, which took place on 26–28 February in Novo Hamburgo, reflected a change of fortune in the leather footwear industry in the country. Visitors flocked to the Fenac Exhibition Centre, where optimism prevailed and deals were closed.

The 43rd Fimec, the International Fair of Leather, Chemicals, Components and Equipment for Footwear and Tanneries, brought together optimistic exhibitors and visitors at the Fenac pavilions, signalling an upturn in the industry.

On the final day, leather footwear-associated entities welcomed the media at a press conference to report the trade fair’s final numbers. According to Fenac CEO Márcio Jung, the success of this edition was evident.

“Fimec is a trade fair built by many hands, and this year’s success can be noted in the corridors and at the exhibition stands,” he said. “Fenac is here to provide an environment suited to encouraging business.

“Part of our current cultural position is to bring the right clients to each trade fair, and that is what makes an event grow. When visitors arrive and feel satisfied, everyone wins. Exhibitors begin arriving naturally and start increasing the size of their stands to ensure greater visibility, leading to growth in the trade fair itself. The entire structure upon which an industry trade fair like this depends also ends up growing.”

To many exhibitors, this edition of the trade fair resulted in more business deals than the previous one, while also leveraging a significant number of new contacts. Tecusi – Injetoras de Poliuretano, for example, doubled its machine sales compared with last year.

“This edition was a lot better than the last,” said Paulo Vinícius, director of Tecusi. “We have made new contacts, especially with professionals from Latin America. We hope to close a few more deals over the coming week and, with that, reach a total of R$1.5 million in business.”

This was the first time that Roberpack participated at the Fimec trade fair.

“We thought it was great,” said commercial director Roberto Ostrzyzeck. “We really didn’t expect this return considering this is our first time here. We presented the market with an innovative solution and the response was really positive. Sales estimates for the next few months are great and, as such, we have already renewed our spot at the next edition.”

Fimec was used to launch a new solution to replace master-boxes with heat-shrink film, resulting in a 70% reduction in costs, while also cutting back on waste.

According to Fenac management, 25% of the exhibitors renewed their contracts for Fimec 2020 on the first two days of the trade fair.

Besides bustling exhibitor numbers, Fimec also pleased those visitors with their sights set on innovation and technology.

“We require productive process excellence and being at Fimec is the best opportunity to make contact with innovation and technology,” said Carlos Alberto Mestriner, director of Calçados Klin.

Mestriner explained that Fimec is already part of the company agenda due to its constant quest for innovation.

“We participate at Fimec every year, with a huge team from different areas of the company, because it is fundamental to come back each year to renew our expertise in new technologies,” he added. “This is fundamental to remaining competitive.”

This year, the quality of the attendees was even higher. The trade fair welcomed business groups comprising an average of 40 professionals from leading footwear hubs including Goiás, Birigui, Franca, Nova Serrana and Juazeiro do Norte, all of them visiting the fair looking to do business.

Additionally, Fimec also received international delegations from countries like Ecuador, Peru and Colombia. The atmosphere was also positive among the foreign visitors.

“We came to the trade fair as part of a 17-strong delegation,” explained Lilia Villavicencio, president of the Ecuador National Footwear Chamber (CALTU). “We are all from the footwear industry in Ecuador, and hope to do business with companies involved in leather, components, chemicals and machinery.

“Our country is responsible for generating around 100,000 direct and indirect jobs. We are happy with the business we have done.”

This year saw the second edition of the Fimec Forum, during the interval on the second day of the trade fair. The initiative is in line with the new culture of Fenac in promoting activities that provide incentives for knowledge.

As such, several recognised names were invited to share their expertise with visitors and to bolster market development by debating relevant topics. The experience provided visitors with valuable insight.

“Events like the Fimec Forum leverage the sector and encourage professionals, providing relevant information and promoting a necessary debate,” said Ana Carolina Grings, product director for Picadilly. “It would be wonderful to have more events like this throughout the year.”

The Fimec Forum is sponsored by BASF, Transduarte and Orisol, with master class support from SEBRAE RS, Universidade Feevale and other entities from the leather footwear industry.

25%
The percentage of exhibitors who renewed contracts for Fimec 2020 on the first two days of the trade fair.
Fenac

This year’s Fimec Studio was themed ‘Converging Relationships’, presenting an array of trends, raw materials and finalised products that serve as inspiration to visitors’ creations.

“The behavioural research we developed deals exactly with the relationship between different generations,” said stylist and director of Studio 10 Christian Thomas. “We also offer an immersion into virtual reality, providing visitors with a truly unique experience.”

“This experience represents a new possibility for the industry, as clients can visualise the material before it is actually produced, optimising time and reducing costs,” Thomas concluded.

The Fimec Studio project is organised by Coelho Assessoria Empresarial, with content developed by Studio 10 and the Feevale University Design Center.

At this year’s fair, the Concept Factory celebrated its 10th edition, presenting visitors with the applicability of technological processes, logistics and products on display at Fimec, through the real-time manufacture of footwear. Under the banner of ‘Information technology at the services of the footwear industry’, the project brought together around 70 companies, ranging from raw material suppliers to management and distribution logistics systems, production control, machines and the disposal of industrial production waste.

One of the highlights at the Factory was the Automated Logistics Operations System (SOLA) Project by Abicalçados, which consists of a series of elements that make use of GS1 international coding standards to control the entire logistics process, from the arrival of raw material at the plant to the end point, namely the retailer. Through the system, each package receives a standard barcode used in over 150 countries, facilitating the entire process for production, inventory control, cargo traceability, customer services and even marketing actions.

A new feature of this year’s edition was the pocket programme with short talks, discussing issues of interest to the footwear industry, with 15-minute presentations held over the three days of the event. It was organised in partnership with Feevale, Fenac, IBTec and Coelho Assessoria Empresarial. The pocket talks also relied on a partnership with Sebrae RS.

The Concept Factory is organised by Fenac, IBTeC and Coelho Assessoria Empresarial, with support from Abicalçados/SOLA Project. 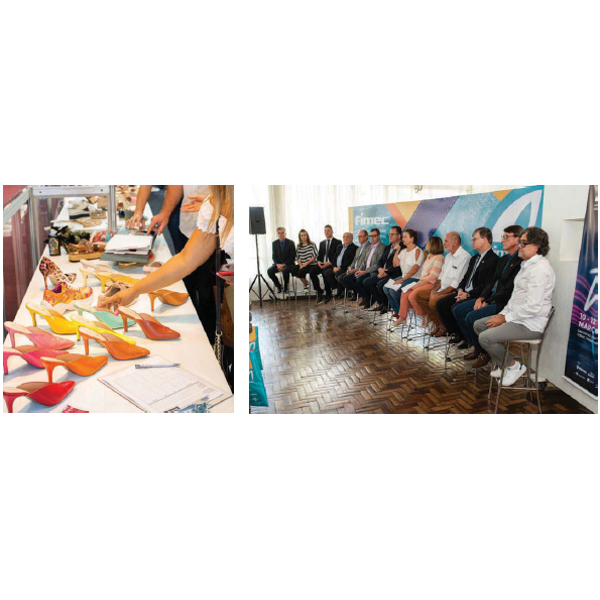