"Carbon footprint of beef cattle hides" was presented by Dr R L Desjardins from the Science and Technology Branch, Agriculture and Agri-Food, Canada to delegates attending the the 9th AICLST conference in Taipei on November 14.
Dr Desjardins delivered the Taiwanese International Leather Association (TILA) lecture where he outlined the impact on greenhouse emissions by cattle and its implications for the tanning industry.

In general conclusion Dr Desjardin said that the general CO2 emissions from cattle had fallen between 1981-2006 largely due to intensive farming methods such as feedlot production of cattle. He also said that dairy cattle had a much higher environmental impact than beef cattle and that the geographic location of where cattle were reared also had a significant impact on the carbon footprint of cattle.

The carbon footprint of leather and where the 'system boundaries' are set is a hot topic in the leather industry at the moment and Dr Desjardin's paper was one of a number given at the conference on the topic.

Meanwhile the IULTCS is developing an ISO standard for measuring the carbon footprint of leather and is hoping to take the measure from the point of slaugher and thus removing the impact of cattle farming from the tanning industry. 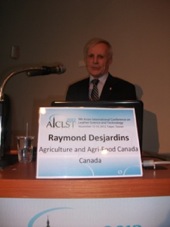