Codes to live by: due diligence for tanneries

At the Forum on Due diligence in the garment and footwear sector in January, Cotance and industriAll European Trade Union shared their views on health and safety in tanneries with the Organization for Economic Cooperation and Development. The former has also partnered with EURATEX and multiple organisations to lend its expertise to a blueprint, which was presented in February, and aims to revitalise skills and jobs in the textile, clothing, leather and footwear sectors.

The Cotance and industriAll European Trade Union project focuses on promoting due diligence to create better tannery work environments. It took centre stage at the Organization for Economic Cooperation and Development (OECD) Forum on Due diligence in the garment and footwear sector, which was held on 30–31 January in Paris.

Gustavo Gonzalez-Quijano, secretary general at Cotance, and Sylvain Lefebvre, industriAll’s deputy general secretary, introduced their organisations’ activities as European social partners for the leather industry, in which they aim to further due diligence and improve workplace safety. Audience members learned about the various initiatives and tools developed by the organisations, as well as the relevance of having a social sectoral dialogue in the context of due diligence. Cotance and industriAll initiatives include the Social Code of Conduct (2000), Social & Environmental Reporting (2011), Risk Assessment in Tanneries – 1st OiRA (2013), Transparency and Traceability (2015), and due diligence for a tannery workplace safety project (2017).

Having a dialogue between representatives for employers and workers promotes industrial relations, driving change. In the European leather industry, there is a consensus that this will have a positive effect in regard to furthering sustainability. By having a social partnership, both organisations can use their resources to create an efficient and cost-effective alternative to private schemes that are prevalent in the textile sector.

The project aims to implement leather-sector- specific instruments that are capable of getting tanners and brands to respond to the challenges of improving workplace safety along the value chain. Their protocols can be cost-effectively audited and certified by various organisations, including the International Organization for Standardization and European Committee for Standardization. This marks the first time that the leather value chain is being addressed by the OECD.

Operators need to prepare for change as legislation is advancing in the UK, France, the Netherlands, the US and Australia.

The OECD’s leather session also included a presentation by the University of Northampton, which shared the preliminary results of a due diligence project survey, and an introduction to the leather value chain by United Nations Industrial Development Organization (UNIDO) representative, Dr Ferenc Schmél. Other panellists included Kering’s group operations sustainability manager, Chiara Morelli, who attended on behalf of the Leather Working Group, and Maria-Teresa Pisani, economic policy officer at the UN Economic Commission for Europe.

The OECD’s event took stock of developments that happened one year after it released the Due Diligence Guidance for Responsible Supply Chains in the Garment and Footwear Sector. It also brought 200 high-level stakeholders from the textile and leather value chains together.

Its agenda was created following the 2013 Rana Plaza collapse in Bangladesh, which killed more than 1,100 people. This type of guidance is bound to increase transparency and traceability throughout the supply chain, and operators need to prepare for change as legislation is advancing in the UK, France, the Netherlands, the US and Australia.

A blueprint for change

In February, a blueprint was introduced in Brussels to revitalise skills and jobs in the textile, clothing, leather and footwear (TCLF) sectors, working in tandem with the Paris due diligence project.

As well as anticipating, and enhancing adequate skills and learning methods, the need to attract and qualify workers brought 21 public and private stakeholders together from the TCLF sectors under a strategic four-year Erasmus+ project called Skills4Smart TCLF 2030. It aims to create a robust, sustainable community of private and public ‘actors’ across Europe, which will update skills and education in these traditional yet dynamic sectors through providing a skills strategy to workers.

During a two-day meeting that centred on the Skills4Smart project in Brussels, blueprint partners came from nine EU countries to discuss the ambitious project, which has been co-funded by the European Commission under the Erasmus+ programme.

Smart4Skills will create a community of TCLF and education stakeholders.

Led by EURATEX (textile and clothing), together with its counterparts Cotance (leather) and the European Confederation of the Footwear Industry, as well as a group of vocational education and training (VET) providers, technical universities, companies and public bodies, the consortium will combine their knowledge to improve conditions to fulfil the TCLF sectors’ growing demand for talented employees. These entities will also reshape the necessary curricula and VET programmes by testing and replicating them across Europe.

The blueprint for sectoral cooperation will help to establish a network of EU-wide VET providers, thereby modernising occupations and curricula to cope with digitalisation, a sustainable economy and technological innovation, in accordance with industry needs. The project will also concentrate on EU countries that are committed to supporting the growth of TCLF industries, which collectively employ two million people and have a combined annual turnover of over €200 billion.

It is hoped that Smart4Skills will create a community of TCLF and education stakeholders who will work together to further industry developments, so workers are equipped with the latest and most advanced skills that will help EU companies to reach their potential. The TCLF sectors will be able to offer exciting career prospects to young people who are not only keen to be part of Europe’s hallmark industries, but also eager to advance their growth and success, while working on high-quality European-made consumer products.

Cotance members should actively encourage companies and workers in the EU leather and tanning sector to include the following International Labour Organization conventions in their codes of conduct for every country they operate in:

Schmél's thoughts from the OECD forum

The OECD organised the Forum on Due diligence in the garment and footwear sector at the organisation's conference centre in Paris on 30–31 January, where a special workshop was devoted to the leather and footwear supply chain traceability. Around 100 representatives
from various organisations attended to hear talks from Cotance, UNIDO, Northampton University, IndustriAll and Kering, among others.

Up until the 20th century, technology and production management dominated the technical press, as well as industry conferences. Work safety was arguably the first social aspect of the production process that gained public interest. This was soon followed by environmental protection, articularly in leather processing.

Today, the industry is privy to the increasing importance of social issues related to manufacturing and trading leather, and related products. The supply chain has become multinational due to the globalisation of the leather industry, especially with the relocation of manufacturing facilities to developing countries, and brands deciding to outsource production; for example, a pair of shoes can be manufactured and sold in one country,
but its components and materials typically originate from at least six. A toxic combination of negative coverage and haphazard practices in some tanneries continue to discredit leather and related products. The overall industry, including footwear and leather goods brands, and trading chains, need to take necessary measures to avoid gaining an unfavourable reputation. To combat this, the OECD's due diligence initiative has put forward methodology for guaranteeing reliability in supply chains.

The traceability of materials used for making leather products is another pertinent issue that stems from reliably marking hides and skins straight after slaughtering, in order to maintain a unique identification code throughout the supply chain. Appropriate marking technology is yet to be invented that can be retained in the material, so it will not be damaged or lost during chemical and physical operations in tanneries, and related logistical operations. Grading and sorting raw hides and skins, as well as semi-finished and finished leather, decomposes batches and creates new ones, which adds to the difficulty of tracing. Splitting is another critical operation from a traceability point of view.

The OECD initiative aims to promote transparency throughout the leather supply chain, thus making due diligence a means of addressing social issues related to sourcing materials, production and trading leather products. The organisation's due diligence guidance identifies risk areas, including child labour, occupational health and safety, and wages, that need to be assessed once suppliers are selected or assisted in complying with the producer's, buyer's or brand's social responsibility commitments.

Asides from economic interest, the availability of funds is another criterion for implementing due diligence. Furthermore, manufacturing companies, especially SMEs, do not have established systems or staff who are dedicated to managing supply chains. Today, wellknown brands are capable of boosting due diligence throughout the supply chain – and they have the appropriate means to communicate this to consumers. 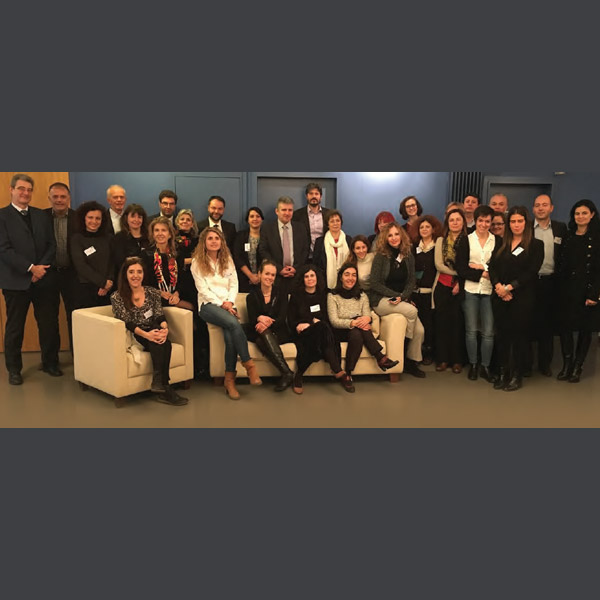 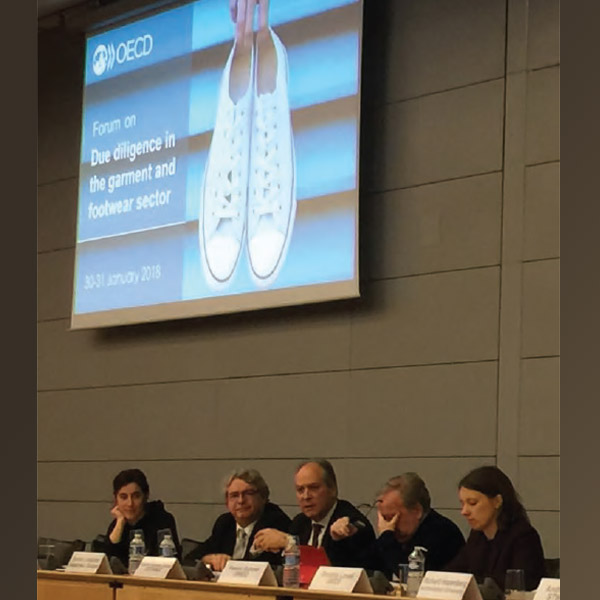 At the forum, the OECD assessed the leather supply chain for the first time. It brought around 100 representatives from leading organisations, including Cotance and Kering. 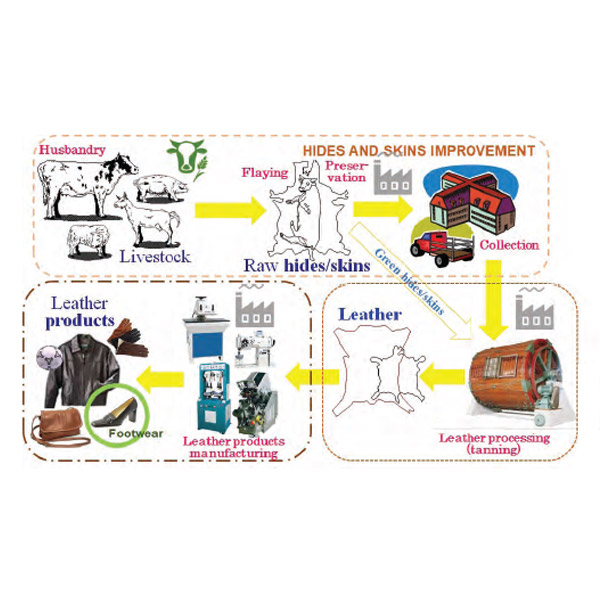 The leather industry is pushing for more traceability to be present throughout the supply chain.
Post to: