Confidence returns to the market at APLF

The 26th edition of the APLF ended on March 31, just before the Easter holidays, with an upbeat mood existing among most that attended. The word most used this year was ‘confidence’ with most exhibitors happy with the level of visitors attending the show and placement of orders looking forward. It believed that consumer demand in China, India and the rest of South East Asia is behind the new optimism as demand from the US, Latin America and Europe is still fragile.

The APLF took place at the Hong Kong Convention and Exhibition centre (HKCEC) in Hong Kong, March 29-31 with two exhibitions (MM&T, Fashion Access) and a major forum (Prime Source) taking place under the APLF umbrella. The leather and leather supply sectors were concentrated in the recently extended hall 1 of HKCEC under the banner of Materials, Manufacturing and Technology (MM&T).

‘The first few hours of the show seemed quiet but suddenly it was like someone pulled the plug and visitors came in large numbers to our stand’, Bill Greene, president, Union Specialties told Leather International. Union Specialties are a leather chemical manufacturer located in the US but with a customer base worldwide. ‘We are happy with the level of visitors we have seen so far and confidence has certainly picked up’, he added.

‘Those familiar with the concept know as ‘tipping point’ will possibly agree, unless they are economists, that 2009/10 was the moment when the global engine of growth and development began to shift away from North America and towards Asia’, Michael Duck, APLF director and exhibition organiser told a press conference held during the show. ‘APLF is in the perfect position to use Hong Kong as a hub to link Asia with the rest of the world’, he said.

For tanners attending the show the only major concern was the continuing rise in raw material prices. With some elements of the global economy still fragile tanners are unable to pass increasing raw material costs on to their customers and thus see their margins squeezed further. Tanners that leather international spoke to during the APLF expect that raw material prices should begin to level out and reduce over the next few weeks as profitability in leathermaking is eroded and they are forced to withdraw from the market or pass on costs. Otherwise the alternative could end up with buyers and retailers specifying non-leather materials.

A more detailed report will be published in the May edition of Leather International magazine. 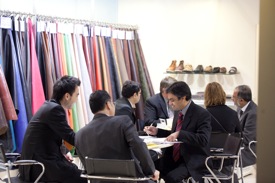