The leather industry supplies the raw material for the manufacturing industry and I think it would be nice to dedicate a Limeblast to the very small players who struggle to survive as they don’t have tanning laboratories, design or export departments and, hence, work day to day, hand to mouth, the way their forbearers have traditionally worked.

In the developed world small manufacturers of leather goods are generally representing the cream of the cream with superb leather quality, exclusive designs and top class clientele, while their colleagues in the developing world work under totally different circumstances and, today, we are going to put our magnifying glass on those micro enterprises in West Africa.

Like elsewhere tanning can be traced back over the ages in West Africa and, like in the 16th and 17th century in Europe, still today the tanning agents are excrements, urine and bark or crushed nuts. Europe developed and from the early 20th century introduced composite chemicals including chrome salts.

The West Africans are still using the traditional tanning agents in their so-called traditional or artisanal tanneries and this has quite an impact on the quality of their leather and the possibilities to sell the leather. The UNESCO World Heritage site in Fez is a showcase of artisanal tanning, but does not represent the actual reality of what goes on in the Sub-Saharan region.

Senegal, Mali, Mauritania, Burkina Faso, Cameroon and Niger each have a few small but industrial tanneries, which export mainly wet-blue though, particularly in Burkina Faso, also crust. Nigeria is a different story, because the main tanneries are foreign owned and produce excellent crust leathers, making it the most important player in the region, that supplies itself for its raw materials from as far as Chad and Sudan. Other countries such as Ghana, Benin, don't need a tanning industry because they use their hides for human consumption.

The majority of employment in the industry, virtually tens of thousands of jobs, are found in the artisanal tanneries, which are distributed over all regions of West Africa and, to a lesser extent, in East Africa, both in the major cities and in rural areas. Although the means at the disposal of these artisanal tanneries are extremely limited, they do produce leather in quantities sufficient for the local manufacturing artisans to make shoes, small leather objects, but also more complicated items like briefcases and many other items.

The art of tanning is passed on from father to son, and in their own way, they produce the best possible leather with the financial, chemical and mechanical means that are at their disposal. Unfortunately the leather smells of the residue animal fats and the type of "chemicals" used. When it rains the shoes made from this leather increase two sizes and obviously do not protect. In spite of the fact that the artisanal tanneries use natural and thus biodegradable products, they pollute the environment and rivers beyond measure. Furthermore, the leather is limited to a beige crust, which the manufacturers have to finish by applying colour and oils.

The artisans who produce leather items from this nonchemical leather don't have designers that propose fashionable objects but use their own fantasy and imagination or dip into fashion magazines to copy what's considered to be in demand. Many clients go to an artisan with a picture of what they want, pay 50% up front and take delivery of their bag or shoes a couple of days later, paying the balance on delivery.

West African tradition proposes a lot of very attractive objects that can and are made of leather, which are on display in small local markets supplying locals, expats and tourists. The items are really cute and colourful. Some countries feature cooperatives that have what's called artisanal villages where they have their products on display. Some of these cooperatives attend dedicated fairs in Paris and London, and they have actually little problem in selling. The issues arise after the sale and are mainly called "smell".

A Burkina Faso cooperative sold to one of the big department stores in the USA several years ago, for them enormous, quantity of small leather objects, which went on sale for a dedicated Christmas market. The initiative was quite successful, but the aftermath was disastrous. When the leather goods were unpacked they had been for some time in closed boxes and emanated the unpleasant smell of the agents used in the tanning process. What had promised to become a huge success story, ended up in disaster.

The cooperative expected follow-up orders and instead got claims. As far as I know the department store in question did not follow up on their claim and absorbed the losses but the episode was a great disappointment to all. If the leather had been produced chemically, the outcome would have been totally different.

The "Centre des Métiers" in Niamey, Niger, built and financed by the French cooperation, demonstrates that one can compromise and tan in tanning pits and, if possible, in a few what we would call laboratory drums, with chemicals to produce acceptable leather from which artisans can make saleable shoes and leather products in general, based on simple designs produced for and by the centre.

In fact the Centre des Métiers sells its products at quite good prices to locals, ex-pats and tourists and without aftersales complaints from their buyers. Alternatively some artisans import leather scrap from Europe and produce their leather goods with this leather eliminating the risk of the smell but the imported scraps are relatively expensive and do not create or maintain employment for the artisanal tanners.

They declare the capacity building to their sponsors (investors) as a success story, but in reality nothing has been done or changed on the ground. The traditional artisanal leather continues to smell, even if produced by tanners who would know better but are not in the position to do better. The artisanal tanners want to implement the techniques that they have learned but lack the finance to buy chemicals, let alone drums (small as they may be) or other essentials like a fleshing machine and/or a shaving machine.

Everybody talks about micro credits, but when tit comes to tat, micro credits are extremely hard to obtain and so small that they don't allow the set-up of even the smallest of microtanneries. So when UN organisations and NGOs say "A" by sending artisans to be trained, they need to say also "B" otherwise the money spent on "A" is a total waste. Theory, practical training and putting at the disposal of the trained people the means to put what was learned into practise go hand in hand. Each of these conditions without the others is totally useless.

The unilateral declared truce with the LGCC is still in place, but will not last if nothing moves.

Does anybody realise that for a non-professional columnist it is extremely challenging to find a subject for each month's issue? Therefore, if there are any readers who have a story that they wish to get published, please do not hesitate to contact me. After almost 15 years and 150 Limeblasts I feel I am running a little bit thin. 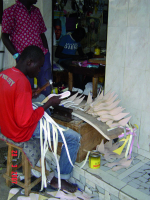