Despite economic challenges, Brazil is one of the world’s leading leather producers and exporters. The biannual Inspiramais trade show in São Paulo plays a key role in showcasing Brazilian leather design. Abi Millar paid a visit to Inspiramais 2020_I, as well as the Couromoda footwear trade show, to find out how the sector is responding to upcoming market trends.

On 15 and 16 January 2019, around 7,000 professionals from the fashion sector descended on the Pro Magno Events Center in São Paulo. Having flown in from all around the world, they were here for Inspiramais 2020_I, the only materials design and innovation exhibition in Latin America. The event, which has been running twice a year for nearly 10 years, provides the fashion production chain with its main inspirations for the featured season. It seeks to boost the development of Brazilian products and raw materials, with a view to expand business across domestic and international markets. Despite difficult market conditions, the Inspiramais Buyer Project is expected to generate $5.7 million worth of sales over the next 12 months.

“We have strength and are a great benchmark when it comes to genuine and high-quality projects,” said Ilse Guimarães, superindendent of the Brazilian Association of Companies of Components for Leather, Footwear and Manufactured Goods (Assintecal).

“The production chains are aligned and seeking this identity for products made in Brazil. Countries like Peru, Argentina and Mexico, for example, increasingly prefer raw materials from Brazil because they feature a distinctive design combined with technology, comfort and differentiated materials. We are literally taking the country to the rest of the world.”

As part of its work promoting Brazilian design, Assintecal coordinates the Image Project, which brings together journalists and opinion leaders from all over the world, and seeks to disseminate the Inspiramais philosophy more broadly.

Walter Rodrigues, who coordinates Assintecal’s Design Center, opened proceedings by discussing the event’s central theme. Building on last year’s themes of ‘resistance’ and ‘alchemy’ (see boxout on the following page) the 2020_I concept was ‘play’. In a world where information is abundant, the real question is how people use it – how do we go about finding new creative pathways and deconstructing the old to create the new?

No longer bound by particular style tribes, people are changing their identities on a dime and expressing themselves in individual ways. For the designers at Inspiramais, this meant scope to experiment. Expressionist patterns, inspired by Van Gogh’s distinctive paintbrush strokes, sat alongside collage-style prints, piracuru fish leather and ‘deconstructed paper’, to name a few.

“Now, more than ever, clothes have become communication objects,” said Rodrigues. “Designers from all over the world use their catwalks to express ideas and concepts such as gender, veganism, race and political issues, turning fashion into messages. However, all this comes from the streets. The hard-won freedom makes it possible to wear clothes and accessories free from fashion dogmas.”

He explained that the ‘play’ concept, currently in the ‘research and laboratory’ stage, will hit the mass market by June. Fashion is moving faster and faster, he pointed out, and the industry needs to stay responsive to new consumer trends and market niches.

The event also gave a sneak preview of what’s to come at the Inspiramais 2020_II event in June, which will explore the concept of ‘zen’. This means a subdued colour palette and weathered-looking fabrics, revealing how time and corrosion can create beautiful new colours and textures.

As part of this preview, new products were displayed from 15 tanneries (cow and exotic skins). These included vegetable-tanned leathers, hair treated with acid, and leathers brushed with dye to create an aged look.

“A tree takes 100 years to grow, and then it becomes furniture that also lasts 100 years,” pointed out Rodrigues. “Leather too can participate in a circular economy with more efficiency. These colours and finishes will make the product last longer, ensuring that wear and tear add value to the product. Corrosion is not a problem but a provocation.”

Among the tanneries represented were Rhoma Pelles (with navy cabretta leather), Romeu Couros (with cow leather in navy, teal and grey), Nova Kaeru (with exotic pirarucu leather) and OCM (with lustrous hair-on leather). All sought to bring a timeless, classic quality to their products.

Displayed alongside these products were prototype shoes, developed in collaboration with the tanneries. As Rodrigues explained, the new leather is not a finished product but an open book for designers – it gives them a chance to add their own DNA into the mix.

Also falling under the ‘Zen’ banner was the Brazilian References Project, which aims to create a new narrative around Brazilian materials. Led by designer Julia Webber, it dispenses with clichéd ideas about Brazil, such as Carnival, and explores lesser-known aspects of Brazilian culture.

In particular, the project looked at Bahia, the birthplace of Brazil’s colonisation. This part of the country maintains a deep reverence for raw materials and handcrafting, not least the production of leather saddles. A related project – Local Iconography – presented materials inspired by the textures of Bahia’s national parks.

Overall, over 1,000 materials were launched at the event, which sought to forge a commercial and creative connection between small handcrafters and large companies. There was also a vibrant programme of talks, exploring topics ranging from digital strategy to consumer behaviour.

Unsurprisingly, sustainability was a major point of focus, with many exhibitors highlighting the eco-friendly properties of their materials. Natural Cotton Color, for example, develops cotton that doesn’t need chemical dyeing, dramatically reducing water wastage. At the other end of the spectrum, Pollibox provides sustainable thermoplastic adhesives. Then there were companies working with laminate. While laminating has a bad reputation in fashion, designers are looking to make it more sustainable.

The products on display were curated and evaluated by Assintecal’s Flavia Vanelli and other specialist consultants.

Following a stimulating day at Inspiramais, the journalists moved on to Couromoda, the largest trade fair for the Brazilian and Latin American footwear markets. Now in its 46th year, this event brings together shoe and leather goods exhibitors, and welcomes buyers from 60 countries. Its importance cannot be understated: the business deals made here account for over a third of the sector’s annual sales.

This year, over 1,500 brands exhibited their products, including the Brazilian shoemaker Arezzo. A retailer and wholesaler, which exports to 65 countries, Arezzo owns six brands: the Arezzo brand itself, along with Schutz, Ana Capri, Alexander Birman, Fiever and Ohme.

Each of these brands is positioned slightly differently in the marketplace. While Arezzo is known predominantly for fast fashion (developing a new collection every two to three weeks), Schutz is considered fashionforward and sassy. Ana Capri caters to a younger market (and expects strong growth over the years ahead), while Alexander Birman sits at the luxury end of the spectrum. The newest brands, Fiever and Ohme, produce hip-looking leather sneakers and comfortable classics, respectively.

Hildo Maus, Jr, an international trader at Arezzo, pointed out one of the central challenges for a Brazilian shoe brand: since Brazil is such a large country, any brand will need to include shoes for all kinds of weather, ranging from sandals to boots. As a result, the event displayed collections suitable for all seasons and climactic variations.

Couromoda followed on from a positive year for Brazilian shoe sales. According to the Brazilian Association of Retailers of Artifacts and Footwear (Ablac), sales in the footwear sector grew 2.6% last year, and are projected to grow another 3% in 2019.

Looking at the economy more generally, Brazilian exports also grew. According to data released by the Federal Government, the country ended 2018 with a positive trade balance of $58.3 billion – the secondhighest figure since 1989. However, economic recovery since the recession has been sluggish, and it remains to be seen whether Brazil’s new president, Jair Bolsonaro, will make good on his bid to kickstart growth.

Leather specifically had a difficult year. While Brazil is one of the world’s largest leather producers and exporters, boasting the world’s largest commercial cattle herd, the market took a tumble in 2018. According to the CICB, which supports the national leather industry, total Brazilian exports of hides and skins were down 24%. A total of 181.7 million square metres were exported (down 10.2% on 2017), valued at $1.443 billion.

Inspiramais, then, represented a chance for good design to assert itself against a challenging backdrop. Visitors were left with the sense of a vibrant, creative and tenacious sector, undeterred by economic difficulties.

“Our goal is to generate maximum visibility for products made in Brazil, presenting the materials to the market and seeking widespread acceptance and concrete results for companies,” said Ilse Guimarães of Assintecal.

Inspiramais also displayed products themed around ‘resistance’ and ‘alchemy’, which were previewed at last year’s events and have since permeated the mass market.

Resistance, the theme for Inspiramais 2019_I, was first conceptualised at the start of the Trump presidency. Taking Isaac Newton’s third law as its starting point – ‘for every action, there is an equal and opposite reaction’ – it explored the ways marginalised cultures push back.

In design terms, this translated to elements taken from Latin American and Eastern European folklore. Prints were elaborate, colours were exaggerated and shapes were voluminous.

“When you deny an identity, it comes out in fashion,” Walter Rodrigues said.

Alchemy, the theme for Inspiramais 2019_II, took its cues from the Marvel Cinematic Universe (with films like Black Panther big in 2018). Exploring the technological aspects of different materials such as biodegradability, or even holographic effects, the products placed a futuristic spin on material design – sci-fi inspired materials dialogue with non-natural, almost alien textures.

They were also influenced by the Bauhaus school, which celebrates its centenary this year.
Source: Inspiramais 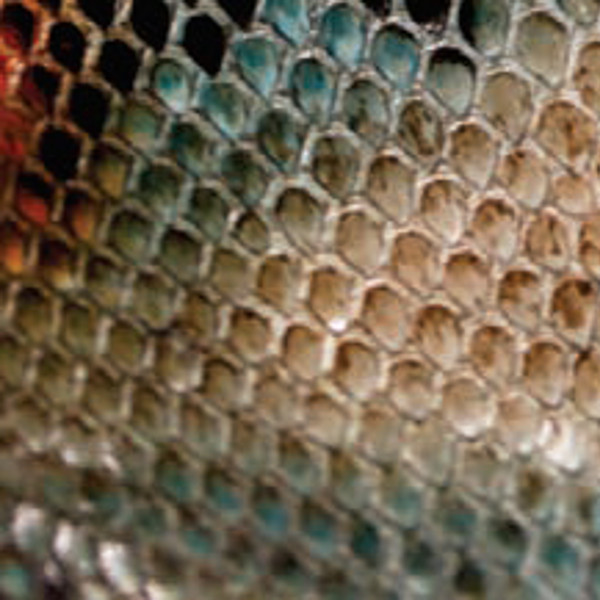 Raw materials from Brazil are in demand due to their distinctive design, comfort and differentiated marterials. 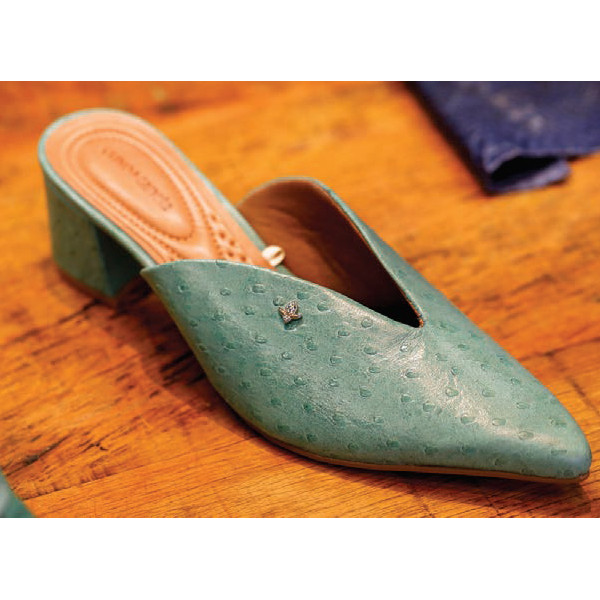 Since Brazil is such a large country, any brand looking to succeed will need to include shoes for all seasons and situations. 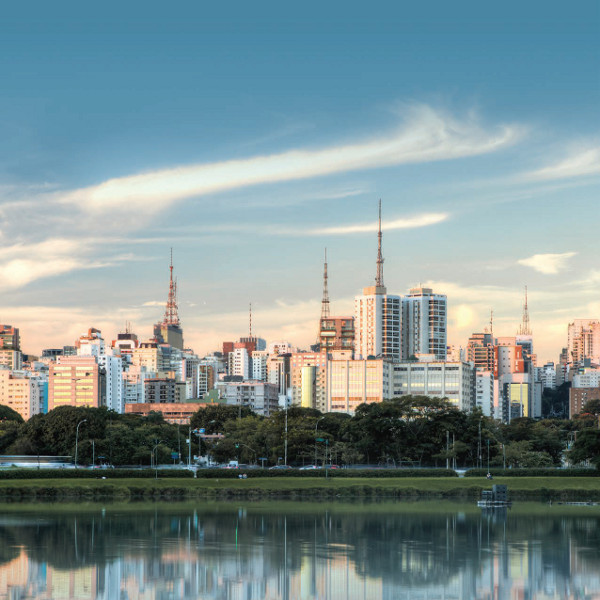 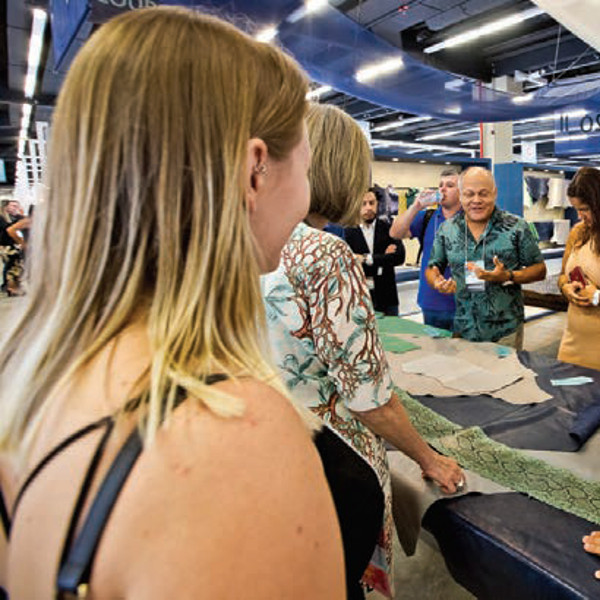 New products, such as vegetable-tanned leathers, were displayed as part of the Inpiramais 2020_II preview.
Post to: