The long decline in US hide prices continued in May. Heavy native steers, the selection with the best demand ‘only’ fell $3, or 5%. By comparison, Texas steer prices, on seasonal weights went from $49 down to $41–42, or nearly 20%. Butt-branded steers traded at $52–53 during the last week of May and closed the month at $49. Colorados, in general, sold on a par with Texas. Prices went from a high of $46 down to $41 as June began, or a decline of 20%.

To calculate steer prices on a C&F or CFR basis, on average – and dependent on selling terms such as destination and sales commissions – $6 can be added to get a general idea of value along the Pacific Rim.

Slaughter was especially heavy in May as the weather warmed up for barbecue season. Be it due to a good economy or consumer preferences, meat consumption rose, as did a more than ample supply of cattle available to packers. The need to sell cattle was exacerbated by drought in much of the cattle raising areas that incentivised producers to take their cattle to market earlier than they may have otherwise.

In March 2018, China imported 2.7 million whole hides heavier than 16kg, half of which were purchased from the US. The second-highest source of these hides for China was Australia, which accounted for 437,436, or 16%.

For full-grain un-split and grain split wet-blue leather, China imported 32.8 million kilograms in March, of which 14.7 came from Brazil, accounting for 45% of imports. The US was the second ranked source at 5.4 million kilograms, or 16%, followed by Kyrgyzstan at 1.5 million or 5%.

All products imported from the US are subject to ‘enhanced’ inspections by Chinese customs agents at the port of entry. For US hides and skins, this will inevitably cause headaches. While USHSLA has not been aware of any specific examples yet, hide and skin imports can be held up during inspection due to myriad arbitrary factors, such as presence of manure in the container, leaking containers and the presence of flies or maggots.

According to contacts at the Ports of Shanghai and Dalian, there are currently no written protocols about what the port inspectors will be looking for in hide and skin shipments. The ‘heightened inspection’ directive from Beijing was communicated verbally or internally only, and is being left up to each Port to interpret and apply. Shanghai and Dalian have advised US exporters to be extra careful with shipments during this period.

Chinese Customs at Weihai and Qingdao

Ports have strengthened quarantine and inspection on US hides. The requirements are as follows:

Because of these requirements, the logistic agents even advise customers not to import U.S. hides during this sensitive time.

All change at GST

GST issued a press release this week regarding the sale and future of the company. “The GST team would like to thank you for your continued patience and support during these past months and the challenges that we have faced and look forward to again being a trusted customer,” it said.

Both have significant experience in automotive leather supply, formally with another global automotive leather supplier. All other corporate and regional management remains at this time, and day-to-day operations will continue business as usual and customers continue to work with the same GST team in purchasing, accounting, logistics and other functional departments.

For years, Texas steers were the benchmark for all other hide selections. Traditionally, they were made of about one third each of natives, butts and Colorados. This time last year, Texas sold at a premium to Colorado and branded steers, and were close in price to butts. Butt-branded steers sold within a few dollars of heavy native steers.

Last summer, the spreads between branded and single or non-branded steers began to widen. This year, the price spreads are striking; Colorados sell at about the same price as Texas, with an abnormal spread between heavy native and butt-branded steers.

The reasons include brands and the bastardisation of traditional norms in hide selections. Tanners much prefer, and are willing to pay, what amounts to a premium for a steer without brands, or only one brand. For most branded hides, such as Texas and Colorado steers, along with branded steers that have now become mostly side-branded hides, they are insisting on a discount to the market. It’s an example of supply and demand. Most hides produced are side-branded and, in the past 12–15 months, buyer preferences have changed.

Slaughter was especially heavy in May as the weather warmed up for barbecue season. Be it due to a good economy or consumer preferences, meat consumption rose, as did a more than ample supply of cattle available to packers.

This is surprising, given the advances made in chemicals, machinery and tannery techniques to turn the proverbial sow’s ears into silk purses, but as the saying goes, the customer is always right. Late last summer, packers/processors and dealers began to buy Texas steers and take out the natives and butts for sale at a premium. Texas steers used to be known for their good grains, and as this reputation began to fade in recent years, packers elected to grade out hides that came from Mexican feeder cattle and still sell steeply discounted ‘M’ steers.

However, tanners say it hasn’t seemed to help Texas. The bottom line is that branded hides are now considered to be the new low grades. 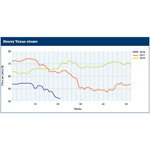 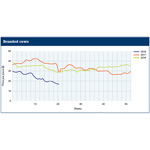 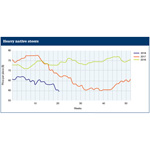 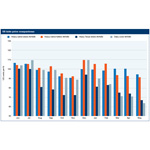 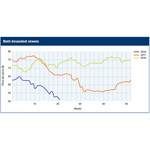