Steer prices have risen by about 10% since the last edition of this magazine. Heavy Texas steers that traded at $47–$51 in November traded in January at $54–56 at an average weight of 66–68lb.

Steer prices have risen by about 10% since the last edition of this magazine. Heavy Texas steers that traded at $47–$51 in November traded in January at $54–56 at an average weight of 66–68lb.

Colorado/branded steer prices also rose, but less dramatically. Early November sales were seen at $52.50–53 and during the first week of January, $54.50 and $55 were accomplished, although prices drifted lower a few weeks later. Heavy native steers enjoyed good demand; prices between November and January rose from an average of $63.50 to $66–67 in late January. Averages on all steers were 66–68lb; butt-branded steers advanced by about $3 to $63 during the period.

Branded cows managed gains. Prices rose from $27.50 to $30 in the ensuing two months. Dairy cows, however, did not fare so well, with prices changing little between November and the end of January.

US automotive upholstery tanner GST filed for bankruptcy in autumn 2017, but received enough debtor-in-possession financing to continue to operate while an auction for its assets was arranged. In January, the court reported that GST AutoLeather has been auctioned off for $172 million to its senior secured lenders, a group that includes private equity and hedge fund firm Black Diamond Capital Management, and will keep operating.

Tanning group PrimeAsia’s, Chinese facility has received a ‘Blue’ rating from the Chinese Central Government’s audit team – one of the few factories in the region to be awarded the standard. There are four colour ratings: Green (100–96 points), Blue (95–90), Yellow (90–60) and Red (<60).

“In Huangjiang, where PrimeAsia China is located, no factories are listed as Green and few are listed as Blue,” said a spokesperson. “The Central Government’s audit programme is more difficult than the local government’s auditing of factories, so well done to our team.” The tannery recently updated its volatile organic compounds (VOC) scrubbing system at a cost of 7 million yuan ($1 million). The new scrubbers remove at least 95% of VOCs from spray machines.

“We have mostly switched to water-based solvents, but a few physical quality requirements still necessitate VOC-based solvents, making the purchase of these scrubbers a requirement for PrimeAsia to ensure VOCs are not being emitted into the environment,” added PrimeAsia.

In other news, PrimeAsia announced in December that it would boost tanning capacity following surge in demand It will be adding extra tanning capacity from spring 2018 to help it deal with backlogs and long lead times.

CEO Jon Clark said demand at its Asian tanneries was “over and above” its forecasts and had outpaced capacity in 2017.

The group’s newly constructed wet-blue warehouse will allow the storage of three months’ worth of inventory in a wellventilated, covered environment. The company is also constructing a 5,000m² solar hot-water system with Danish company Arcon-Sunmark at its Vietnamese facility, as well as building tanks and systems that will double the capacity of the on-site wastewater treatment facility.

The global food company announced its intention to sell Five Rivers Cattle Feeding, the largest cattle feeding operation in the world, in June 2017, when parent company JBS, which is based in São Paulo, Brazil, agreed to pay a $3.1-billion fine to settle a major bribery scandal involving politicians and company executives in the South American nation. JBS’s board of directors approved the sale, though few initially thought the company would sell any of its US assets. The sale includes 11 feed yards across Arizona, Colorado, Idaho, Kansas, Oklahoma and Texas, with feeding capacity of more than 900,000 animals. The company also agreed to supply cattle to JBS USA beef-processing plants.

“The sale of the Five Rivers Cattle Feeding assets and farms is a strategic move that will allow JBS USA to more efficiently deploy working capital, and focus on the company’s core food and value-added products businesses,” said Andre Nogueira, CEO of JBS USA in the news release. “The transaction concludes the divestment programme previously announced and unanimously approved by the JBS board of directors, and more favourably positions the company for future opportunities.”

JBS Five Rivers will operate as usual until the closure of the transaction, the release stated. In addition, JBS USA will continue agreements to purchase cattle from feed yards associated with Five Rivers Cattle Feeding operations. The current Five Rivers management team will remain in place, led by president and CEO Mike Thoren.

“The acquisition of the largest and mostrespected cattle feeding operation in the world continues Pinnacle’s strategic path of investment and development of our diversified, global, physical commodity platform, of which livestock is a critical sector,” said Jason Kellman, managing partner and chief investment officer of Pinnacle Asset Management.

US beef braced for busier year

The Wall Street Journal reports that the country produced a record 99.7 billion pounds of red meat and poultry in 2017, and the industry is on track for an even bigger slaughter this year. Tyson Foods and other meat companies are building new plants that are expected to push US meat production up in 2018 at the fastest pace in two decades.

The last several years saw rapid growth built on domestic and surging export demand, and forecasts see nothing but expansion on the horizon. Some analysts are sceptical, and say trade tensions are a cloud on growth projections, with some concerned that the US’s withdrawal from the Trans-Pacific Partnership trade pact will undermine recent exportfocused investments.

Leucadia is reportedly exploring a sale of part, or all, of its stake in its National Beef Packing unit. The company owns a 79% stake in the Kansas City-based beef giant, a 26-yearold supplier of steaks, hamburgers and other beef products. News or the transaction has arrived at a time when the industry is rebounding from a rough patch, thanks to rising consumer demand and cheap grain.

Leucadia purchased the stake in National Beef, which slaughters about 12.5% of US beef cattle, in 2011 for $868 million. It is unclear how much it might fetch.

Beef exports in 2017 climbed nearly 13%, according to estimates from the US Department of Agriculture, led by growing sales to Japan, Hong Kong and Korea. Foreign sales are projected to climb by another 4.5% in 2018.

In the US, beef consumption is now estimated at 58lb per capita – its highest level since 2010. Demand for beef is climbing as the cost of raising cattle has declined. Feed – the biggest cost involved in raising livestock – remains cheap. In autumn 2017, farmers harvested what was expected to be another record corn and soybean crop, the latest in a string of bumper harvests that has driven down crop prices. Ranchers have responded by raising more cattle, which has helped to boost the size of the beef cattle supply by 12% since early 2014, when a drought forced many ranchers to reduce the sizes of their herds.

Leucadia bought its stake in National Beef as part of a long-term bet that a growing and more-affluent global population would eat more red meat. Executives then acknowledged the business’s exposure to price swings – National Beef lost money in 2013, 2014 and 2015.

National Beef is the fourth-largest US beef processor behind Tyson Foods, BS and Cargill. The company also sells cattle hides to leathermakers for clothing, furniture and car-seat covers.

The increases reflected larger supplies of fed and non-fed cattle, especially as the year progressed. Last year’s total commercial cattle slaughter was an estimated 32.181 million head, up by 1.603 million head on 2016’s figure.

Total commercial cattle slaughter in 2018 might increase by another 1.206 million to 33.387 million head, according to the Livestock Marketing Information Center. The question is by how much packers will have to increase their Monday–Friday kills and Saturday kills to process the extra cattle. The industry currently has the capacity to process about 128,000 head a day in all plants, from the largest to the smallest lockers. Slaughter capacity of the top 30 packers stands at 126,715 head a day, so theoretically packers could increase their average Saturday kills to well over 50,000 a week by all running a single full shift.

The biggest impediment to doing this is the availability of trained workers; packers might prefer to handle increased cattle numbers by raising their Monday–Friday kills. These scarcely went over 120,000 head in any week in 2017, but Saturday kills will also have to increase to accommodate the extra cattle.

USHSLA figures for the first ten months of 2017 show that packers and traders shipped 20.3 million wet-salted hides, yielding revenue of more than $1.2 billion. This is an increase of 16% in volume and 9% in value.

More than 11.2 million wet-salted hides went to China over the ten-month period, representing an increase of 8% on 2016. The volume of shipments to South Korea, Mexico and Thailand rose by 12, 53 and 107% respectively.

Together, these four markets consumed more than 90% of all US wet-salted hide exports between January and October 2017. On the other hand, US wet-blue exports have continued to decline. In the first ten months of 2017, tanners and traders shipped 5.1 million wet-blue hides, yielding $488.3 million. In terms of volume, wet-blue exports fell by 6%.

Italian tanners were the exception, buying more than 1.9 million wet-blue hides from the US in the first ten months of 2017, 40% more than in the same period last year, paying $187.1 million, a 39% increase in value. These purchase levels made Italy the most important market for US wet-blue hides.

Cattle-on-feed numbers are up again. For the first time in more than six years, the inventory increased by 8% from 2017. The last time the US Department of Agriculture reported such an increase was for August 2011.

There were 11.5 million head of cattle and calves on feed reported on 1 December 2017 for the latest report, an increase of 864,000 head from the same time the previous year. The report increased every month in 2017; the last time this kind of movement happened was an 8% decrease in October 2013.

November placements indicated even higher increases could be seen with a 14% increase versus 2016 in placements. A total of 2.1 million cattle entered feedlots in November.

Marketings of fed cattle were up by 3% in November, with 1.84 million fed cattle entering packers. These were the highest marketings for a November since reporting began in 1996.

All state reporting saw year-on-year increases for cattle on feed. States seeing double-digit increases in cattle on feed from the previous year were California (12%), Iowa (17%) and Washington (10%).

Any market needs sales volume in order to maintain its price, and in the case of hides so far this year, it has been spotty at best. Weekly USDA export numbers are prone to circumstantial reporting, but nearly every major producer has admitted to a slow start to 2018. It's not just due to prices, but also to a lack of widespread buyer interest.

Tanners are now into the prime side -leather selling season, and optimism was high at press time for Lineapelle in Milan in February. It is interesting, however, that big producers have not raised prices recently, which indicates that they are not all that confident about where the market is headed.

Lower trades have already been witnessed on certain selections; Lunar New Year tannery closings are around the corner and are market-negative. Steer prices almost always stay firm, and even advance a little during the first three months of the year; the first quarter of 2018 could prove to be the exception. 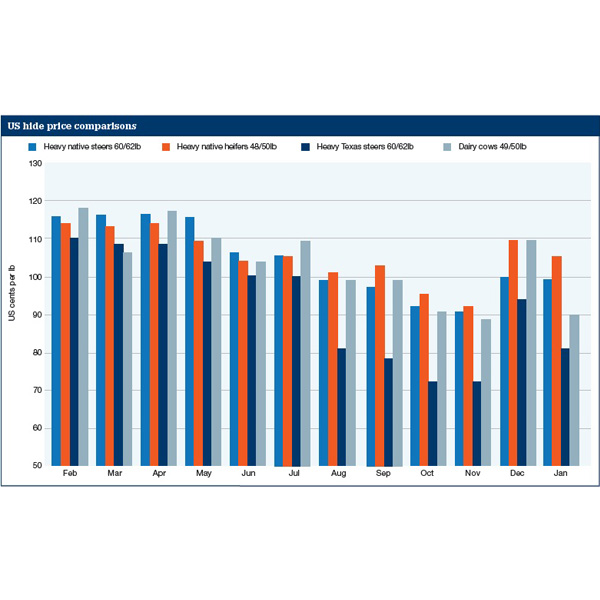 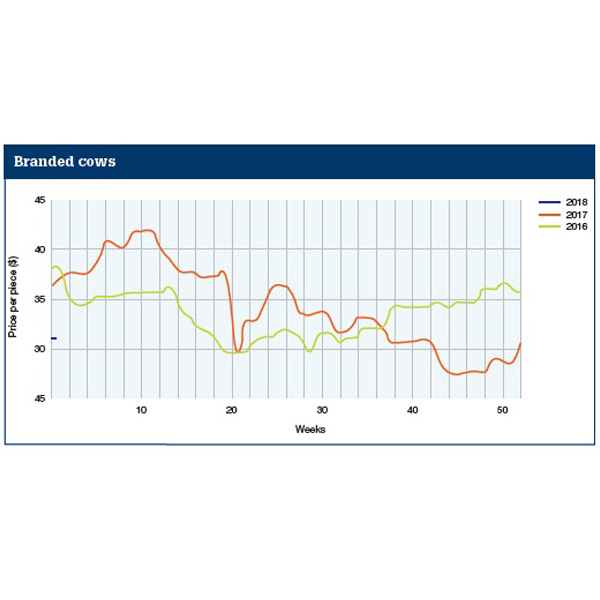 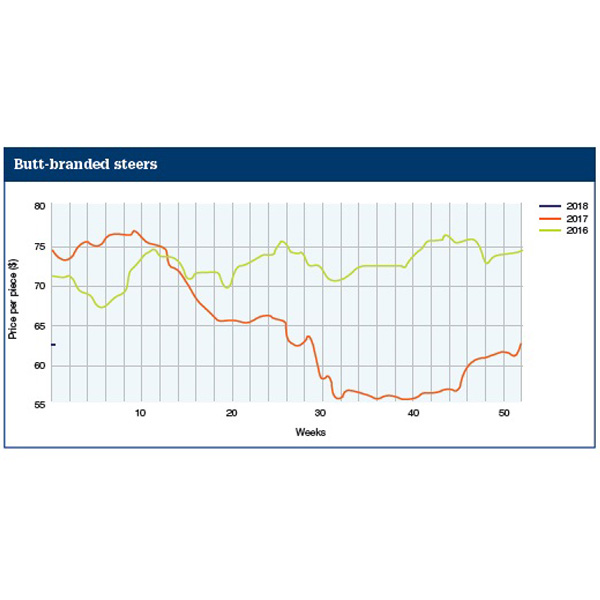 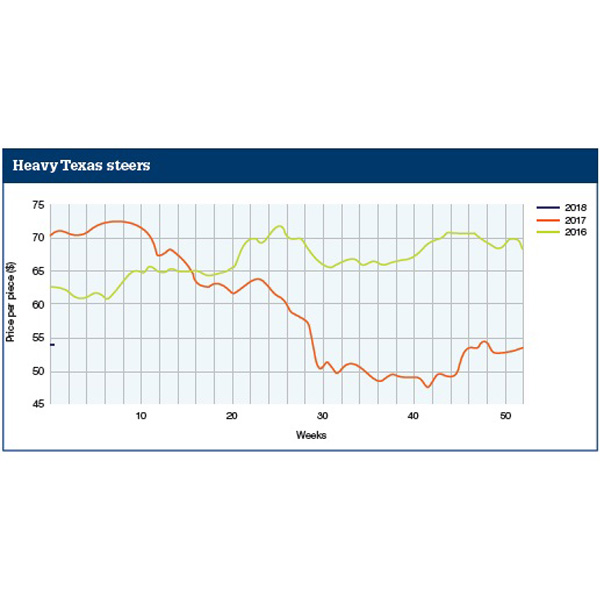 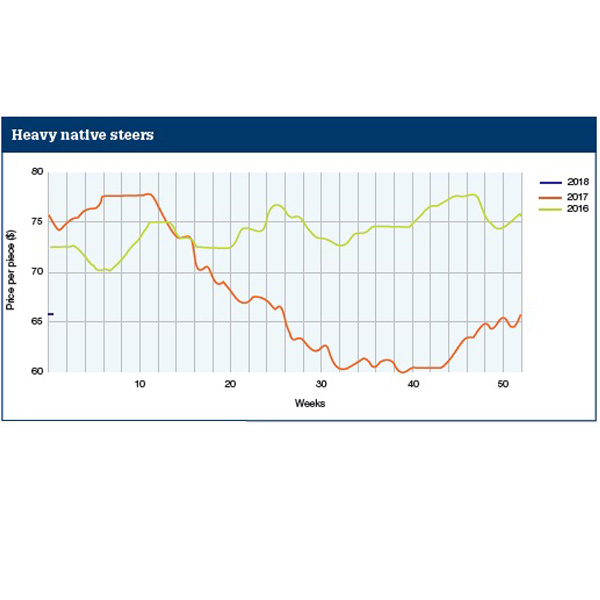