Don Ohsman’s view on the US leather market

The name of the film The Perfect Storm comes to mind when looking at the US hide market. Prices have continued to fall more rapidly than was the case in June, with slaughter running at maximum capacity, and side-leather business reaching its lowest ebb of the year. This lack of demand is seasonal, but when compared with previous years, it’s much worse.

Stories from China say that shoe leather sales are down by more than 25–30%. A number of hide sales sold at higher prices have also been renegotiated. These ‘extra’ sales, as well as heavy kills, exacerbate a challenging situation.

In addition, the burgeoning tariff war between China and the US has not included hides or wet-blue thus far, but Chinese tanners fear that it soon will, potentially increasing their costs.

The most abundant selection, heavy Texas steers, traded at $41 FOB during the first week of June. In early July, sales were $35, showing a 17% decline in a month. Colorado steers, the second most popular selection, went down by 24% from $41 to $33 FOB. In May and June, FOB prices on these two steer selections have fallen by 31 and 39%, respectively. Heavy native steers withstood the price malaise the best of all steers, but regardless, traded down to $55 while butt-branded steers fell to $45.

The cow sector fared worse. Branded cows, which traded at $17–18 in early June, sold at $12–13 during the first week of July, with one distress sale taking place down to $9. Holstein cow sales were $24 at the same time, going down from $31–32. Even worse, there are far more cows for sale than there are buyers showing interest, regardless of price.

As mentioned above, slaughter remained high and there’s no shortage of cattle to come either.

In the US, cattle and calves on feed for the slaughter market for feedlots with a capacity of 1,000 or more totalled 11.6 million head on 1 June – a 4% increase from the year-earlier figure, and the highest June inventory since the series began in 1996.

In line with analysts’ expectations, the latest June tally marked the 18th straight month of year-on-year increases. Feedlot inventories, as noted by livestock market specialist Dr Derrell Peel from Oklahoma State University's livestock extension programme, have increased year over year for 26 of the past 28 months.

According to the US Department of Agriculture, the marketing of fed cattle during May totalled 2.06 million head, which was 5% above 2017, as predicted by analysts. This growth portends more cattle slaughter and an uptick in beef production, but Peel stated that the industry’s ability to raise beef production in the second half of the year will depend on how much cattle slaughter increases and carcass weights rebound from 2017’s decline. As of now, annual beef production is predicted to rise by 4–4.5% year over year.

Marketing throughout July, August and September will be critical, according to the ‘Daily Livestock Report’ (DLR) published by Steiner Consulting Group, though its analysts predict that May and June’s healthy marketing rate, helped by solid foodservice and retail demand, has continued.

Placements in feedlots during May – at 2.12 million head – were above 2017 levels and higher than average analyst expectations, but within the range of estimates. A surge in auction sales helped bump the number of placements, according to DLR, which also noted that the same month’s combination of volatile-fed cattle prices and higher corn values influenced those decisions. Net placements were 2.05 million head.

All of this has enabled packers to make some of the highest margins per head in their history, as consumer demand is strong due, in part, to the flourishing economy and having the lowest retail meat prices in a very long time.

There are also a higher number of hides for sale than there is tanner demand to buy them. However, this is not to say that hides aren’t being sold. Automotive, furniture and accessory tanners are relatively busy, while shoe leather tanners are still turning their drums, albeit less than would be normally the case. The bottom line: the declining trend in US hide prices is far from over.

Marfrig Global Foods completed its acquisition of 51% of National Beef in June, cementing its place as the world’s second-largest beef processor. Financed by Rabobank, the $969-million transaction was first announced in April, when Marfrig estimated that its revenue would reach $13 billion, and the total cattle slaughter capacity would hit 8.3 million head per year with the combined operations. With this deal, the company now has access to the Japanese and South Korean markets, which are currently closed to Brazilian beef.

The transaction was completed within the timeline estimated by Marfrig’s CEO, Martin Secco, who stated that the company would finalise the acquisition in the first half of 2018. However, the business didn’t provide updates on the sale of its subsidiary Keystone, but this is expected to be completes by the end of July.

The Trump administration has announced it will move forward with tariffs on $50-billion worth of trade from China. The US Trade Representative recently posted a press release that indicated there are two different tariff lists.

The first set contains 818 lines of the original 1,333 HS lines that were included on the proposed list published on 6 April. US Customs and Border Protection started collecting duties on these items from 6 July.

The second set contains 284 proposed new tariff lines that cover approximately $16-billion worth of imports from China, and will undergo further review in a public notice and comment process, including a public hearing. No hides, leather, footwear or related products have been included on either list so far.

China announced it will take action. In April, the country listed the products it would retaliate against if the US tariffs were adopted; hides, skins, leather and related products were not included in this proposal. However, there has been some confusion for China-based tanners, regarding whether US hides and skins products are included on the tariffs lists, but for the time being, they are not.

An end to dock disruption?

A new deal with dock workers may set the stage for labour peace at US seaports. According to the Wall Street Journal’s Logistics Report, operators at east and Gulf Coast ports as well as the International Longshoremen’s Association have a tentative six-year contract in hand that will provide stability for importers and exporters following several years of tension at cargo terminals.

The agreement beats the 30 September expiration date of the current contract, and will help retailers, manufacturers and other companies that depend on trade to set up supply chains for the peak season, without worrying about disruptions. This is a big change from previous years, including late 2014 when severe delays came amid contentious contract talks at West Coast ports. The East and Gulf Coast contract applies to workers at ports from Maine to Texas through to mid-2024, and the West Coast labour agreement ends in 2022. 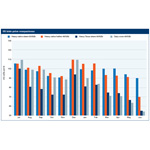 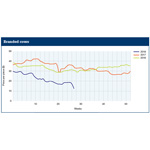 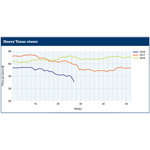