The big news in North America since the last report was the severe July drop in benchmark heavy Texas steer prices, which plummeted at the end of the week of 28 July, losing $6.00. Midweek sales were already lower, with 62/64lb trading at $53.00. Then, on Thursday and Friday, two volume sales were posted at $51.50. Some sources claimed that the actual FOB price was closer to $50.00, as the C&F price was $56.50. By Friday afternoon, reports were surfacing that the supplier was now sold out, which later proved to be false. Heavier Texas prices also dropped, with a sale of 74lb and up reported at $64.00 on Tuesday, $62.00 on Thursday, and $58.00 on Friday.

Branded steers – also known as Colorados – had to accept sharply lower prices in order to generate sales. Most reported sales were between $51.00 and $55.00 throughout the week.

Butt prices dropped along with the other steer selections. Trades during the week were reported at $58.00–59.00, down by $4.00 from the previous week.

Cattle and calves on feed for the slaughter market in the US for feedlots with a capacity of 1,000 or more head totalled 10.80 million head on 1 July. The inventory was 4% higher than on the same date last year. The inventory included 6.96 million steers and steer calves, an increase of 1% on the previous year. This group accounted for 64% of the total inventory. Heifers and heifer calves accounted for 3.86 million head, up 11% on 2016.

The US beef cow herd has increased by 7% in the past two years, while beef replacement heifers were down 2% since USDA’s last mid-year inventory report. The total cattle herd counting all cattle was at 103 million head on 1 July 2017.

The total cow herd was at 41.9 million head, up 5% from the 39.8 million head mark two summers ago. Beef cows comprised of 32.5 million head in the total herd and accounted for a 7% increase during the past two years. Dairy cows were up 1% from the previous report with 9.4 million milk cows.

There has been a 4% increase in springborn calves since 2016 and an 8% rise from two years ago for calves born before 1 July. USDA estimates another 9.8 million calves will be born in the second half of 2017.

Ocean carriers have started to see some improvement in container freight rates. Container spot rates from Asia to the US and Europe rose in July ahead of a planned August general rate increase (GRI) and freight all kinds (FAK) rate increases.

The upturn was most conspicuous on the trans-Pacific routes, with the Shanghai Containerized Freight Index rising 37.6% for the West Coast to $1,687/40/ft equivalent unit (FEU) and 20.2% for the East Coast to $2,685/FEU. The SCFI recorded freight rates for Northern Europe were up 4.8% for the week to $963 per 20ft equivalent unit and 3.6% for the Mediterranean to $883 per TEU.

The World Container Index (WCI) assessed by Drewry – a composite of container freight rates on eight major routes to and from the US, Europe and Asia – was down by 1% to $1,406./FEU for the week ending 28 July, but was up 19% from the same period in 2016.

The pace of rate erosion reduced on Asia- Europe and Transpacific trades in July. Rates on the Shanghai-Rotterdam route lost $20 to $1,685/FEU, while rates from Shanghai to New York slipped by $23 to reach $2,179/FEU, and those from Shanghai to Los Angeles lost $24 to $1,218/FEU. The GRIs were expected to lift rates to the US and Europe at press time.

All this should help profitability for beleaguered ocean freight carriers that have suffered through years of depressed rates, leading to mass consolidation, the building of megaships to improve efficiency and even the bankruptcy of Hanjin Shipping last year.

Drewry director Philip Damas said on a webinar recently that he expected the industry to end the year in the black, achieving a cumulative profit of around $5 billion. This expected improved industry profitability seems to be supported by OOCL’s operating results. It claimed it carried 6.8% more containers on its ships this July than in the same period of 2016, as revenue improved by 15.2% to $2.6 billion.

While most general rate increases this year have been largely unsuccessful, the spot market in the trans-Pacific lanes and Asia- Europe routes showed strong gains.

For the US, those gains were supported by peak-season volumes, but Asia-Europe rates continued to seesaw. Meanwhile, delays on the trans-Pacific routes to the US and congestion at northern European ports continued to plague the industry.

Since APLF in April, US prices have fallen by 11% on Texas steers. The consensus is that the sharp decline in Chinese domestic leather demand is the main culprit, combined with exceptional US slaughter.

Creekstone Farms, the Arkansas Citybased packing company with $550 million in sales last year, has been sold to Japanese trading house Marubeni. Creekstone, the 12th-biggest US packing firm, was owned by private-equity firm Sun Capital Partners. A Japanese news source reported the deal to be worth $170 million. Marubeni already owns an Australian feedlot, which means the company now has interests in two of the world’s largest beef-producing and exporting countries.

International business analysts believe Marubeni sees changes in trade policy among major economies as business opportunities, and is making a play to be on the leading edge of US beef exports to China with its purchase of Creekstone.

Creekstone processed about 250,000 cattle last year, about a fifth of which was exported to Europe, Japan and other countries. It received a licence to export to China soon after the ban was lifted in July. Marubeni says it has targeted sales of $620 million from Creekstone by 2020 through increasing exports to China and other countries.

Since APLF in April, US prices have fallen by 11% on Texas steers. The consensus is that the sharp decline in Chinese domestic leather demand is the main culprit, combined with exceptional US slaughter. However, demand has also fallen for other origins, so market declines cannot be blamed solely on supply.

The unknown is when, or if, Chinese domestic demand will return to its previous level, or at least somewhere above its current state.

The leather-selling season is around the corner, and there is a good chance for improved demand and prices. Hopefully, as the trade convenes in the last days of August at ACLE in Shanghai, the message will be more positive than the current negative feeling about Chinese business. 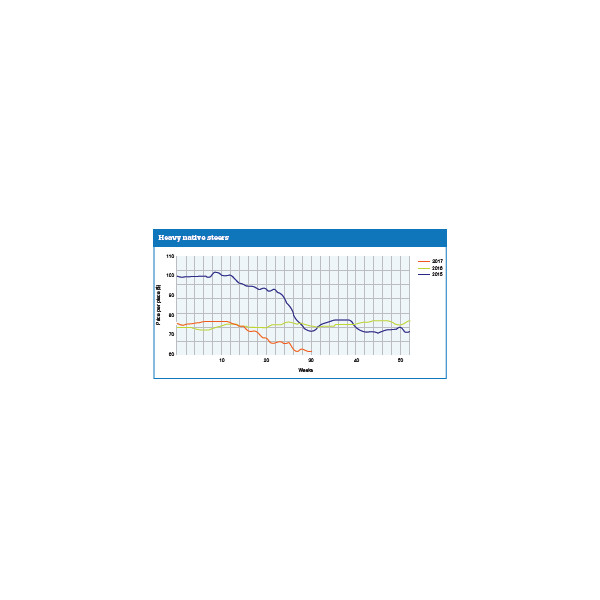 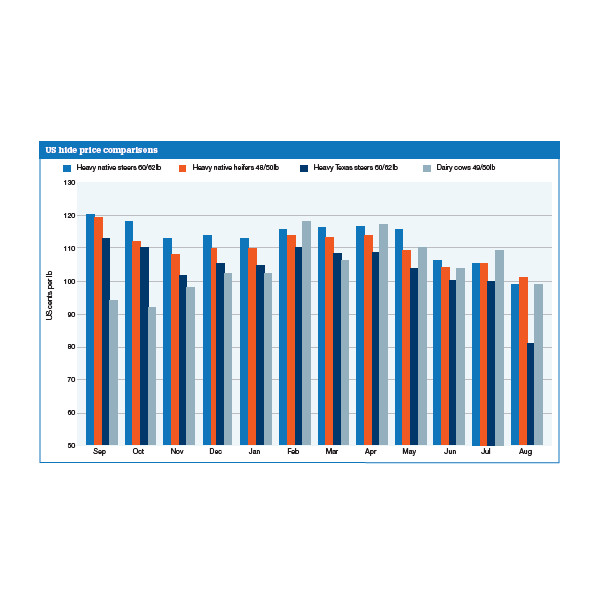 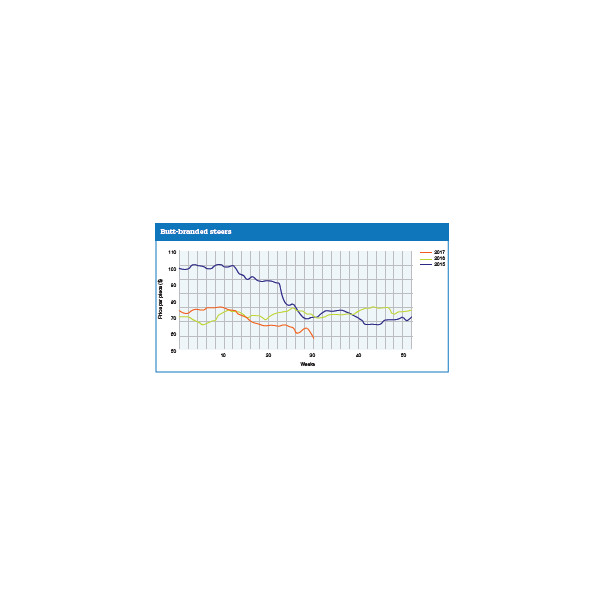 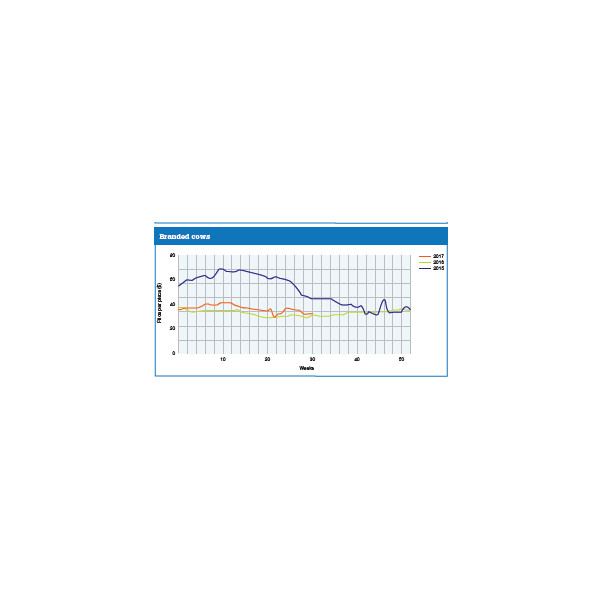 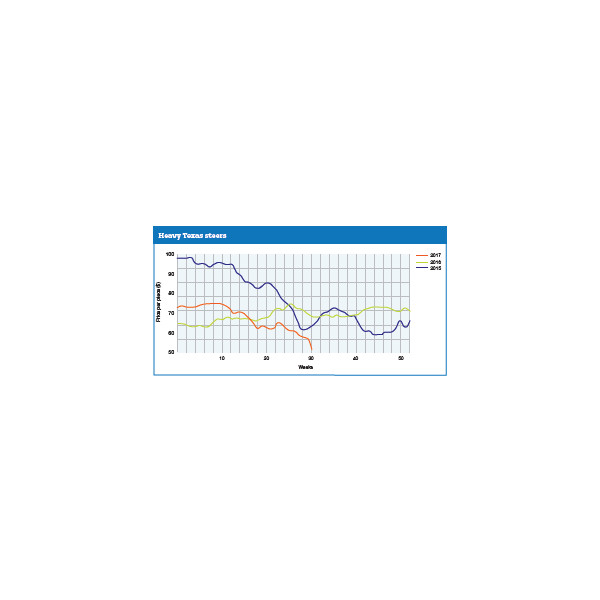