The price of US hides has sputtered along at relatively close to steady levels since our last report. Benchmark heavy Texas steers sold throughout October at a range between $32.50 up to $34.00 FOB. Seasonal averages were between 62 and 66lb, as animals gained fat and hair to prepare for winter weather. Jumbo weights became more readily available as a result, selling at $39.00 and $40.00 towards the month end. Considering the prevailing weakness of all selections, it is interesting to note that seasonal-average Texas traded at the end of September at a low of $32.50, the same as the last week of October.

There continues be an overabundance of cattle and therefore hides available on the market. For example, a record was set for October cattle on feed (COF).

The total inventory of 11.4 million was the highest number reached since the report started in 1996. The monthly inventory also saw an increase on September’s figure, with 275,000 more COF. The feedlot inventory includes 7.09 million steers, an increase of 2.29% on 2017. Heifers saw a large increase of 11%, with a total of 4.3 million heifers in feedlots on 1 October.

Feedlot inventories increased in every major state except South Dakota, which dropped by 2.3% on last year. The largest percentage increase was for California at 20.9%, closely followed by Arizona at 19%. The next largest increase was in Washington with a 10% climb. States with the largest increases per head include Nebraska with 140,000 more cattle since last year and Kansas with 120,000 additional cattle.

The top five cattle feedlot inventory states saw no change in order and are as follows:

September feedlot placements, however, declined 99,000, with fewer cattle entering yards, resulting in a 4.6% drop compared with the same month in 2017. Fed cattle marketing for September was down 3.72% since last year, with 1.72 million head going through packers. The numbers of US feedlots 1,000 head or larger were:

Analysts regarded the report as bullish. September placements were 4.4% below analysts’ average forecast. September marketings were slightly below the average forecast but nearly 1% above a year ago after taking one fewer slaughter days into account. The smaller-than-expected placements meant the 1 October COF total was 0.9% below the average forecast. It was 587,000 head larger than a year ago and the highest inventory for this date since the data series began in 1996. The report showed that the two largest weight categories (700–799lb and 800–899lb) placed 109,000 fewer cattle than last year.

The Farm Bureau reported that the US-China tariff tit-for-tat continued as China imposed another $60 billion in tariffs on US exports, after the US slapped tariffs on an additional $200 billion worth of Chinese goods. US hides were among the casualties of this most recent round.

China is by far the largest importer of hides and skins in the world. Over half of US skin and hide exports go to China. The overall impact of the drop in by-product value on US cattle producers is significant.

When cattle are processed, no part of the animal goes to waste. Hides are turned into leather, bones and blood are turned into meal, and other parts are made into fats and greases used to make things like renewable diesel. These by-products add to the overall value of the animal, with recent by-product drop values averaging 8% of the value of the live fed steer. There is even research to suggest that increasing the by-product values by 10% could lead to an increase of 1.4–2.4% in the steer’s value. In August 2014, steer by-product drop values peaked at $16.83, and subsequently declined sharply in 2015. This moderated and recovered in 2016, but since then, this byproduct value has fallen, reaching a low of $9.01 in August.

The biggest driver of this decline is the drop in the value of hides. As the value of the hide has declined, so too has its share of the overall by-product drop value. Hides account for by far the largest share of the by-product value. However, hide prices have experienced a substantial decline over the previous five years, leading hides to account for lower percentages of the overall drop value, as well as in the overall percentage of the live steer value.

This price decline has been happening for a few years, propelled by two significant factors: increased supply of hides and struggling demand from China. The increased supply in hides is driven by larger numbers of domestic and foreign cattle being processed; this is the inevitable result of an expansionary phase in the cattle market in recent years.

Before these tariffs were added, China had been experiencing reduced demand for hides, driven by several factors including the substitution of materials, rising labour costs and tightening environmental regulations. The leather industry faces substantial competition from petroleumbased synthetic materials, particularly in footwear manufacturing. While the high hide prices of two years ago were a short-term boon for the industry, they exacerbated this switch to cheaper synthetic materials.

China has seen labour costs rise, spurring some factories to move to other parts of Asia. According to USDA’s Foreign Agriculture Service (FAS), shoe manufacturers reported a 500% increase in their labour costs over the past 30 years. In that same FAS report, tanners and shoe manufacturers reported that environmental regulations have tightened significantly over recent years as Chinese regulators are now putting their foot down on waste water, solid waste, and gas released from tanners and shoe factories.

So what are the overall takeaways? Despite the downturn in the Chinese leather industry, the country will continue to play an important role for US hides. The recent tariffs are ultimately not to blame for the tough price environment that US hides are operating in. This is linked more to market fundamentals and more competition from substitutes. US tariffs on leather product imports from China will also have a measurable impact on US hide prices by depressing demand for the output of the hide market’s largest customer. Ultimately, however, Chinese tariffs on US hides will make tough times tougher for the hide industry.

The big concern among Chinese tanners right now is a totally unfounded rumour that, at year end, what is currently a 5% tariff on all US hides coming into China will become 25%. As a result, these tanners have been buying in greater quantities to get hides into their plants prior to late December. The big question is: what will happen once they’ve bought all the hides needed before the anticipated tariff increase? Will they stop buying to a point that will push hide prices still lower?

Reports have also been circulating of a slowdown in auto sales in China and the US, as well as Europe, translating to a weaker heavy native steer market. 62/66lb, which had been trading at a $10.00 premium to butt-branded steers, fell to $54.00 at the month end with an oversupply building up, portending still lower prices ahead.

The cow sector, and specifically branded cows, continued to be under pressure. Prices were seen for the least desirable origins down to $9.00 on 50/52lb. The most favoured were up to $12.00–$13.00 on 54/56lb, but producers struggled to find enough buyers. In some cases, this was regardless of price.

So what can we expect for US hide prices? There are small signs of somewhat lower kills, which traditionally happen in the last two months of the year, and a seasonal increase in shoe leather demand. Will this be enough to halt a decline or improve prices? Steady would be great – and any improvement would be an unforeseen miracle. 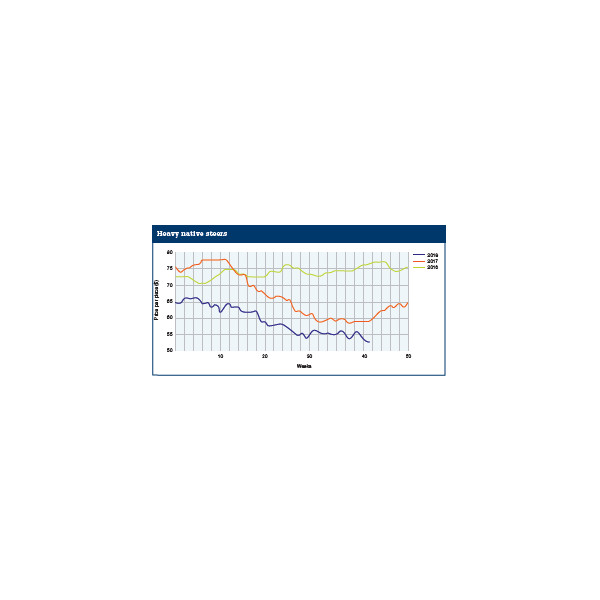 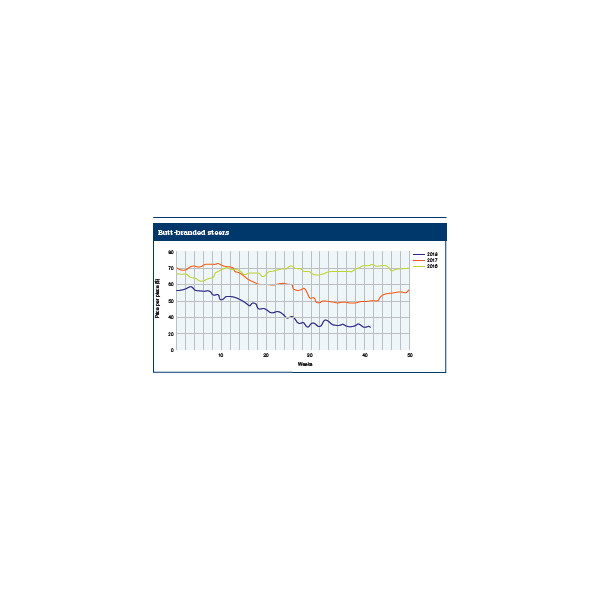 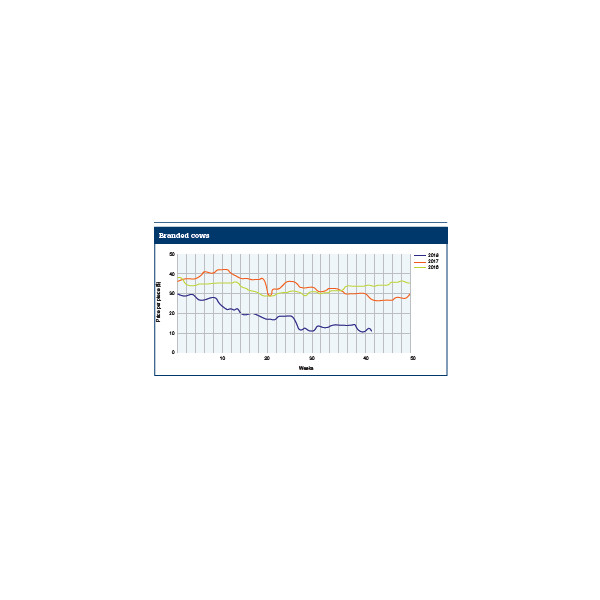 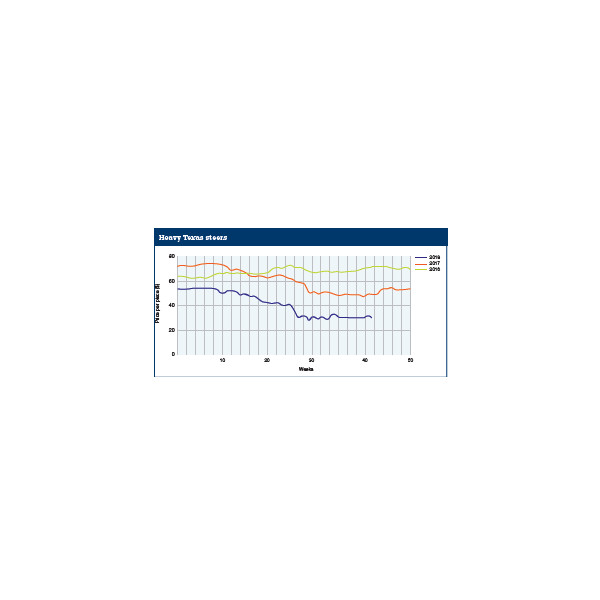 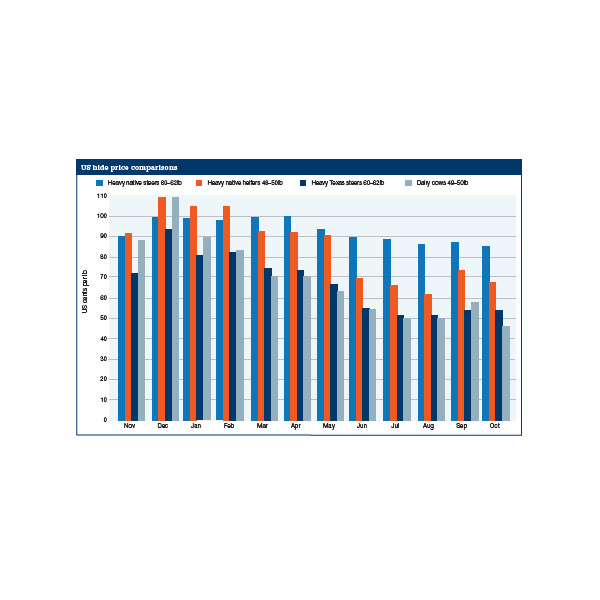