Wet-blue, previously suffering from a malaise, has found volume buyers who appreciate their comparative value. The US's wet-blue production approximates 30% of total slaughter.

Even demand for wet-blue splits increased in February.

To get some perspective how much better hide business is in the US, below are 2016 export statistics. Prices are higher so far this year, as well as slaughter and export totals.

The US hide, skin and leather industry exported more than $2 billion in cattle hides, pigskins and semi-processed leather products in 2016. Total export value remained lower after peaking in 2014, but the decreasing exports slowed compared with a larger drop-off in 2015.

According to US Department of Agriculture data, exports of wet-salted cattle hides (those that have been preserved using brine solutions) dropped to $1.39 billion in value, a 5% decrease from 2015 levels. Exports of wet-blue cattle hides (semi-processed hides that have undergone the first stages of leather tanning) similarly fell by 19% to $606 million.

China was the largest purchaser of salted and wet-blue cattle hides for 2016, with imports of wet-salted cattle hides valued at over $861 million and $217 million of wet-blue cattle hide products. Other large destination markets included Korea, Mexico, Vietnam and the EU. US pigskin exports also dropped 16% in value to $32 million. The largest markets for pigskins from the US continue to be Mexico and Taiwan.

The export data reflects sluggish global leather industry market conditions in recent years. A variety of factors, including economic slowdowns in China and reduced leather use in footwear globally, have pushed demand lower.

US expands at decreasing rate

The USDA National Agricultural Statistics Service's (NASS's) cattle report on 31 January showed higher inventory numbers in many categories for the third consecutive year. The total cattle and calf inventory increased about 2% from 2016. Increases were seen in 27 states. Those with the largest increases in all cattle and calves included Texas (500,000 head), Missouri (250,000 head), Oklahoma (200,000 head), and Kansas and Colorado (150,000 each head).

The expansion was probably buoyed by strong cow-calf operator returns in 2014 and 2015, as well as improved pasture and range conditions in much of the plains region. Beef cow numbers were 3% higher than the same period last year, but milk cow numbers were virtually unchanged. Total beef cows increased by 3%, but a number of indicators suggest the rate of expansion is slowing. Heifers for beef and milk cow replacement are often used as barometers of herd expansion or contraction rates. Heifers for beef cow replacement were 1% higher than last year, but down from the 4 and 3% increases in 2015 and 2016 respectively (the first two years of this expansion).

The economy has improved and people feel better about their finances, but is the industry now on easy street? Far from it.

Heifers for milk cow replacement registered at 1% below 2016 levels, but were positive for the first two years of the expansion. Producers also indicated that they expected only 2% more beef heifers to calve during 2017, down from respective increases of 7 and 6% in 2015 and 2016. Total US cattle imports for 2016 were reported at 1.71 million head, down nearly 14% year over year. Since the 2014 highs, cattle imports from Canada and Mexico were projected to decrease for a third straight year in 2017 to 1.68 million head. During 2016, higher US cattle supplies and a decline in feeder cattle prices contributed to the decline in imports of feeder animals from Canada and Mexico. Mexico continues to finish more animals in feedlots and sell increasing amounts of beef to the US and the rest of the world.

Drovers.com reported recently that the US beef cowherd was 31.2 million head on 1 January, 2017. The beef cowherd has expanded a total of 7.3% since the recent low on 1 January 2014. The inventory of beef replacement heifers relative to the beef cow inventory is the best indication of future beef herd expansion. The January 2017 ratio of replacement heifers to the cowherd was 20.6%, down slightly from a year ago. The 2016 ratio of 21.0% was the highest in nearly half a century.

The heifer ratio has been rising sharply since herd expansion began in 2014, with the last three years having the three highest levels since 1969. The four-year average since 2014 is 20.4%. The average for the 25 years prior to 2014 was 17.3%. The current ratio of beef replacement heifers to the cowherd suggests that herd expansion will continue relatively aggressively in 2017. There are differences across regions, however.

The long-term average shows that beef replacement heifer ratios are generally higher in the northern part of the US with the largest average ratios in the North-West, Northern Rockies, Northern Plains, Great Lakes and North-East regions. This may be due to the colder climate, different cattle types, and higher proportions of purebred operations. These regions account for 29.4% of beef cows. The lowest average ratio is found the South (Alabama, Georiga, and Florida) although the lowest ratio in 2017 is in the Appalachian region (Kentucky, Tennessee, and West Virginia).

Cattle on feed up

Cattle and calves on feed for the slaughter market in the US for feedlots with capacity of 1,000 or more head totalled 10.8 million head on 1 February 2017. The inventory was 1% above the same date in 2016. Placements in feedlots during January were 1.98 million head, 11% above 2016. Net placements were 1.93 million head. Marketings of fed cattle during January totalled 1.75 million head, 10% above 2016. Marketings of fed cattle for feedlots with capacity of 1,000 or more head during 2016 represented 87.1% of total cattle marketed from all feedlots in the US, down slightly from 87.2% during 2015.

The country’s meat packers, who had generated record setting profits in the last part of 2016, found margins narrowing in the new year. Regardless, Tyson Foods increased its profit forecast for the year as it reported earnings rose 29.0% in the latest quarter and a surprise climb in revenue, helped in part by lower livestock costs.

The company’s results were helped in the quarter particularly by its beef and pork segments, which reported stronger domestic and export demand amid increased domestic availability of cattle and hogs. The returns generated by these segments were fuelling growth in the chicken and prepared foods segments, according to chief executive Tom Hayes.

Lear Corp, which bought Eagle Ottawa two years ago, announced that it had agreed to buy Grupo Antolin’s automotive seating unit in a bid to expand sales abroad.

The manufacturer said the transaction was valued at €286 million ($307 million) on a cash and debt-free basis. It expected to close on the acquisition in the first half of the year, subject to the usual regulatory approvals in Europe. The deal strengthens Lear in Europe; Eagle’s $322 million in annual sales are concentrated in five European countries.

The seating business has consolidated heavily over the past five years, with the largest players – Magna International, Adient and Lear – vying for market share. Seating is seen as an area ripe for growth, with the expected rise of autonomous vehicles potentially redefining automotive interiors. The strong dollar and weak euro also likely made the acquisition appealing for Lear.

Grupo Antolin’s seating business specialises in seat assembly, structures and mechanisms, and trim. It employs 2,273 in six countries. The firm, which is based in Burgos, Spain, said it would continue to focus on interiors and intended to “accelerate investments already planned to improve its production capabilities, open new factories, and increase R&D capabilities”.

As a popular, Depression-era song once declared, happy days are here again. The economy has improved and people feel better about their finances, but is the industry now on easy street? Far from it. Synthetics haven't gone away and, if leather prices increase by very much, it's quite likely that the market will start to decline again.

The next two months or so represent the peak leather selling season in footwear and accessories. The material is being seen in more footwear styles for autumn/winter than has been the case in quite some time, but once this leather has been bought, sales are destined to slow.

This week, producers have lamented that they did not see much in the way of healthy buyer interest in the form of aggressive bidding for many selections. The rationale behind the price gains as show above is due, for the most part, to producers forward-selling positions.

The next two months or so represent the peak leather selling season in footwear and accessories.

The material is being seen in more footwear styles for autumn/winter than has been the case in quite some time, but once this leather has been bought, sales are destined to slow.

Upholstery should remain a solid destination for the types of hides used, but that alone cannot be expected to support current price levels.

No price apocalypses going into summer are anticipated, and little ‘irrational exuberance’ has been seen so far. However, a degree of caution in terms of inventory is recommended over the coming months. 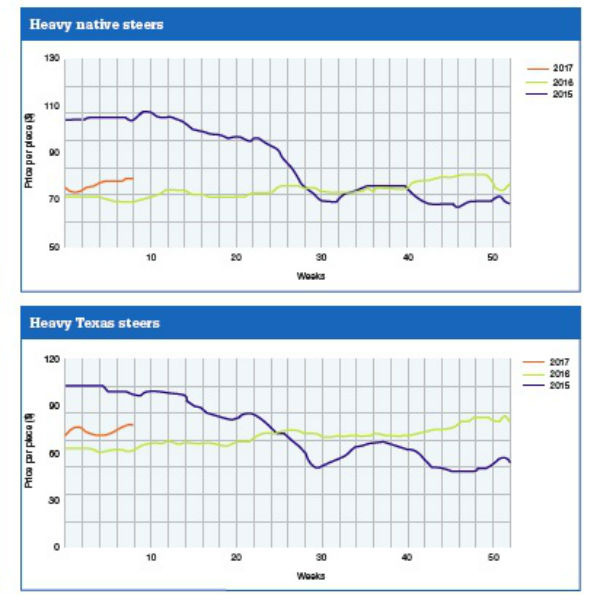