Hidenet's Don Ohsman shares the key market insights from across the Atlantic.

The American steer market has been remarkably steady since late July, when heavy Texas steers sold at $73 and $75 C&F. Heavy native prices haven’t moved much either, with business booked between $78 and $80 remaining between $76 and $78. Branded cows, which struggled for most of the summer, levelled off, then slowly improved, in early September, with C&F prices increasing from $40–43 to $43–45 towards the end of the month. Holstein cows saw better interest in Shanghai during ACLE: prices at press time had risen by several dollars from their July depths.

So far this year, federally inspected slaughter expanded at a rate of close to 5% compared with a year ago. August saw as many as 600,000 weekly kills, but this did not seem to have any adverse affect on prices. Interestingly, if unsurprisingly, in the eight weeks up to 16 September, slaughter exceeded export and domestic sales, but this placed no downward pressure on prices.

On top of all this, the Hanjin bankruptcy in August lumbered hide shippers with containers that could not be unloaded, and deprived tanners of contracted hides. This caused some buyers to buy again using different steamship lines, in the hope that the new purchases would arrive before drums ran empty.  The problem may be compounded for hide shippers in the not-too-distant future, with a rumoured 10–15% increase in freight rates as a result of the Hanjin situation.

Cattle producers faced a tough market in the final third of the year, but looked forward to a promising future in commodity purchases for feed. Editorial director Greg Henderson caught up with Chip Flory, host of Farm Journal’s Market Rally, to discuss what might be expected of the remainder of 2016.

“Year to date, beef cow slaughter is up by 11%, and dairy is down 1%,” says Henderson. “In some weeks, beef cow slaughter has been as high as 25%.” This does not mean expansion is over, advises Henderson, noting that the numbers have been inflated by older cows having been held over the last couple of years due to record calf prices.

John Nalivka, president of Sterling Marketing, reckons the 1 January 2017 inventory report will have the beef herd up by 2% at 94 million head.

“He thinks that will be the peak number,” explains Henderson. “By January 2018, we will be about even, after which a liquidation phase will continue for the next three years.”

This is bad news for the industry, says Henderson, since beef production will increase as cows head to town on top of calves, driving prices for feeder cattle and young animals lower than they are now.

The project will expand the plant’s boxed-beef storage and shipping capabilities, including new sorters and shipping lanes and is expected to be completed in spring 2017.

“Customers increasingly are requesting smaller and lighter boxes,” said Dennis Boyles, the firm’s vice-president and general manager. “This project will enable us to deliver the products customers want, when they want them, more efficiently.”

National Beef also announced plans for a similar expansion at its plant in Dodge City.

There was good news regarding China’s response to the Zika virus. The president of the United States Hide, Skin and Leather Association (USHSLA), Steve Sothmann, advised its members that China’s General Administration of Quality Supervision, Inspection and Quarantine (AQSIQ) had revised its requirements for US imports.

A risk-assessment that used data supplied by US Centers for Disease Control and Prevention (CDC) determined that only cargo originating from Florida must now carry a disinsection certificate. However, any vessel found by local inspectors to be carrying adult mosquitoes, eggs, larva or infected cases, will be subject to the full Zika requirements, as will any ship that has loaded or unloaded in the south-eastern US state.

Hide prices have been steady since July in a year that has more or less mirrored the previous one, despite there being 918,00 more hides available in 2016 (an increase of 4.4%) than there were 12 months ago.

One feasible explanation is that tanners are using more hides, but there are caveats to this rationale. One is the amount of wet blue sat in warehouses, another is the record number of auto sales in 2016, which has accounted for the bulk of heavy native and butt-branded steers.

Generally, however, nearly all of the hides produced have been sold, so it’s possible that the similarity in this year’s prices to those in 2015 (the cow sector excluded) is not due to supply, but is instead an indication that the industry is in better shape than was believed.

Slaughter rates for cattle normally decline over Thanksgiving and Christmas, as consumers traditionally switch from beef to turkey and other meats.

Demand for leather should pick up as we head into autumn and, given the circumstances described, it would seem that prices have a better-than-even chance of increasing over the next month or two. 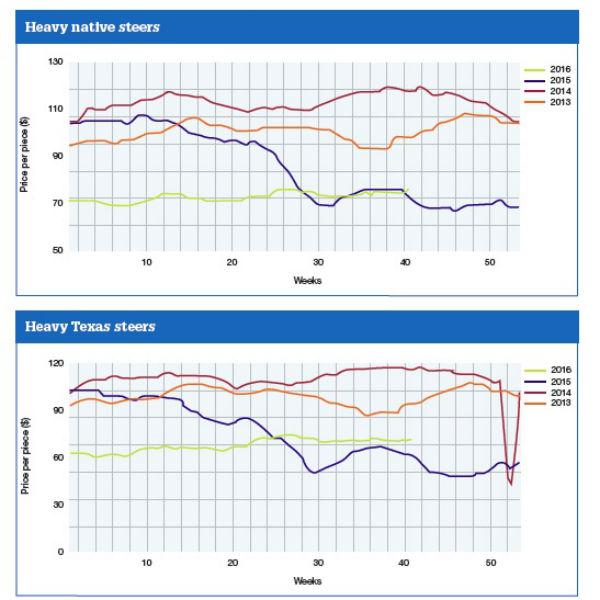 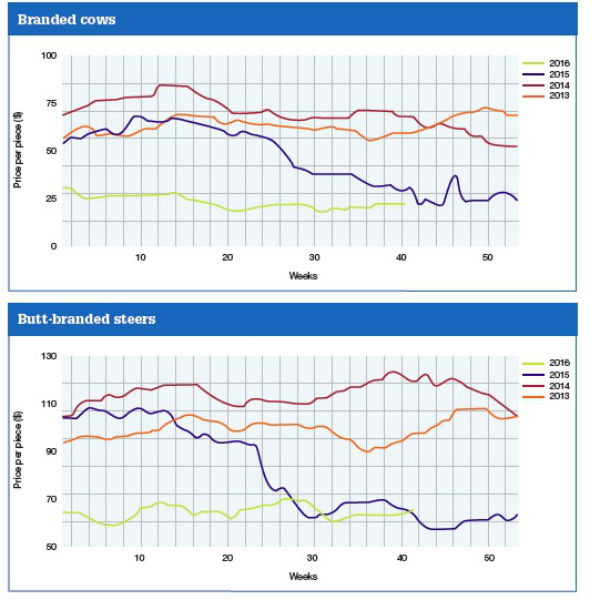