A look at the global leather market for May 2016.

As is more often than not the case, US hide prices rose in the weeks before APLF in Hong Kong, only to find an increasing buyer resistance. This resulted in slow sales during the fair, as well as reports of a lack of volume trading just prior to and immediately after the event when producers and traders made the rounds of face-to-face visits with their Asian customers.

The high of the market just prior to the fair for benchmark heavy Texas steers was at $72–73 C&F with only limited volume; regardless of producers fairly well-forward-sold positions, these levels were able to be maintained until recently, when there was even less volume.

Texas steers were not the only selection that peaked in the midst of APLF. Butt-branded steers declined from $79 and $80 C&F to where they traded at $76–77 C&F. Heavy native steers were typically $1–2 higher.

The cow sector, especially branded cows, tried repeatedly to generate enough bids, even at lower prices, to keep up with slaughter. The cow sector typically includes about 20% or so of total slaughter but there were still too many hides on the market for producers to liquidate their accumulations. Prices, as we go to press, are down to the lowest levels seen since 2010, and possibly even before.

Offerings during the end of March were seen at a basis of $36–39 C&F on averages 48–52lb and buyers still demurred. The Hebei area of China has been the main consumer of cows, not just from the US, but other regions as well, and due to various circumstances, demand from this destination has all but gone away.

There were also some surprises in USDA export numbers, recently released for the first two months of the year. The value of exports declined but this was due to the fall in prices. What is noteworthy is that compared with a year earlier, total exports rose 22% with a slaughter rate that at that time was running about 1% lower.

A recent analysis by the Daily Livestock Report noted that a lack of expansion in Canada and Mexico is important since the number of their cattle in the US slaughter mix is not insignificant. Imports of Canadian cattle (feeder and slaughter cattle) were 830,479 head in 2015. Total US cattle slaughter in 2015 was 28 million head, implying that Canadian and Mexican-born cattle account for around 7% of the number of cattle going into US slaughter plants. The 1 January cattle inventory in Canada was reported by Statistics Canada at 11.96 million head, just 40,000 head or 0.3% higher than a year ago.

The broader context is that North American inventories continue to be quite a bit lower than 10–15 years ago, according to the report by the Daily Livestock Report. Canada and Mexico, so far, have not participated in herd rebuilding. This is different from what is happening in South America, where Brazil, Argentina and Uruguay are all quickly rebuilding their herds. The combined North American cattle inventory on 1 January was estimated at 120.4 million head, 2.2 million head (1.9% higher than a year ago). But this was still 13.8 million head (10.3% lower than it was in 2005).

At the same time, cattle on feed for the period were up 1%, placements into feedlots were up 5% and marketing – cattle that went to slaughter – were up 7% on the same period in 2015. There is little doubt that the US herd is now in an expansion cycle and US consumers are getting ready to fire up their barbecues to increase beef consumption. Perhaps more important is that packers are able to operate profitably, after months of losses. All those cattle that weren’t killed in the first quarter of the year are coming to market now.

On the demand side, as noted above, automotive – which has led consumption – still only takes less than 20% or so of hide production. The most important use is in footwear, which was down significantly from a year ago (and with it, hide prices), which is seeing, and will continue to see, fewer orders from brands as mid-year approaches.

If supply and demand ever mattered in the direction of hide prices, this is certainly the time. 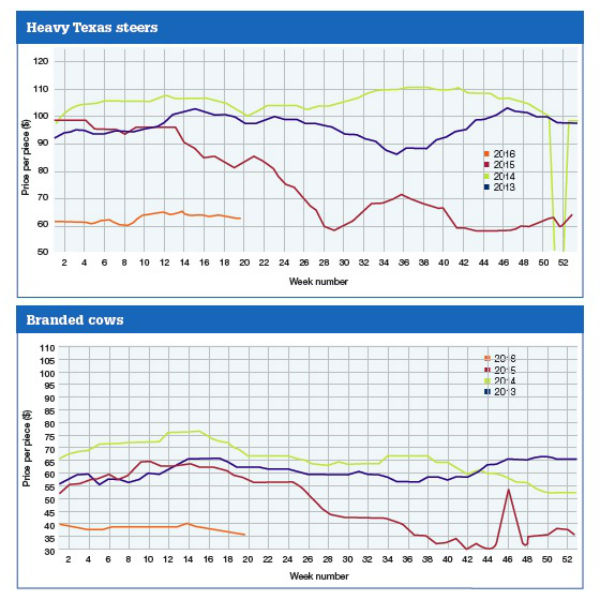 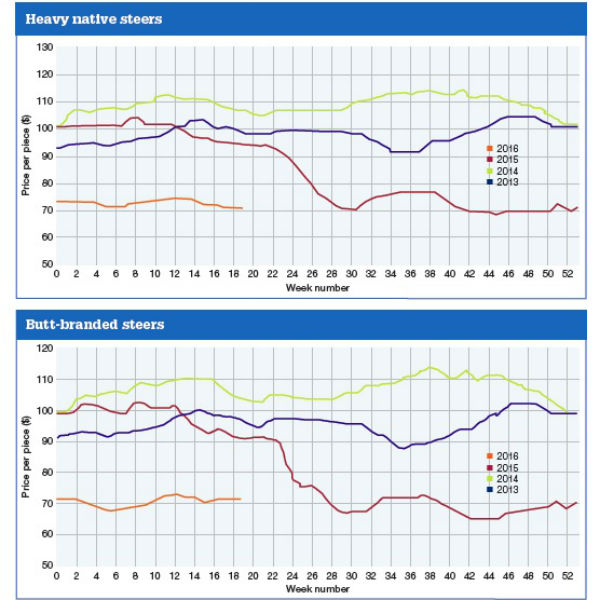 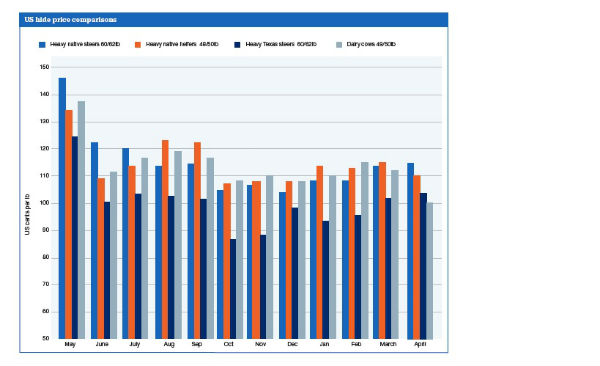