Creativity and sustainability were at the heart of Première Vision New York on 16–17 January. Leather International braved the freezing conditions to take the temperature of the North American markets.

Here we are again at Pier 94 on Manhattan’s far west side for Première Vision New York (PVNY), winter edition that anticipates the collections and trends for spring and summer 2019. Seasonally, we’re at the other end of the spectrum, with lazy summer picnics along the banks of the Hudson having given way to earmuffed joggers keeping pace with ice floating downstream. It’s a different world at the show, of course, and this season’s themes concentrated on sustainability, local sourcing and manufacturing.

The same offerings were represented – yarns, fabrics, leather, accessories and designs – with an overriding eco-friendly drumbeat, but leather was unique in that it was reduced to one stand. That honour, at stand B1, went to Turkey’s Emelda tannery, based in Istanbul. Export manager Tamer Savcilioglu wasn’t fazed, however, and relished the idea of being the centre of attention, albeit by default.

There was certainly a buzz around B1 for much of the show, which proved to be a boon for business. Turkey itself is gathering steam as business with Russia improves and investments in new markets occur, opening up new possibilities. North America is certainly one of those markets, and despite being told Emelda would be the only leather exhibitor, Savcilioglu wasn’t deterred, seeing it as an opportunity. The market is still in flux from the peak in 2014 and, since then, a lot of focus has been on the local Turkish market.

Consumer appetite is still reticent, but things are getting better according to Savcilioglu, and despite some of the usual exhibitors not attending the show, Emelda held fast – and Savcilioglu was grateful it did.

Leathers, specifically, were “sophisticated and adorned in soft fantasy for the season”, and she emphasised the great leaps in technology, chemicals and priorities into sustainability that enable these new trends to flourish. “Delicacy slips into colours, gently disrupting textures and aspects,” she commented. “It’s a season in which silhouettes open the door to joyful and determined fashion perspectives.”

Apart from leather, the remaining 253 exhibitors rounded out another international event, showcasing cutting-edge know-how from 27 countries. Exhibitors’ eco-responsible products were organised according to the Première Vision performance codes, which highlighted the specific properties and qualities of the samples: Responsible Production, Recycled, Eco-Friendly Finishing and Organic.

Local manufacturing was once again central to the show with Première Vision’s ongoing partnership with the CFDA. Their collaborative Fashion Manufacturing Initiative, which promotes creativity in those cities where the show is hosted, sought to nurture, elevate and preserve garment production in New York City, ultimately connecting fashion designers to local manufacturing. 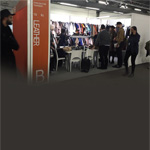