S S Palanimanickam, Indian Minister of State for Finance has officially opened the 27th edition of India International Leather Fair in a warm Chennai evening on January 31. The show takes place until February 3.
2012 marks another record year for the IILF, which now covers a surface area of 9,500 sq m representing 425 companies of which 125 are foreign from 23 countries.

Running alongside the fair, the CLE are also hosting a buyer/seller meeting for overseas visitors, which will take place at a nearby hotel in Chennai, February 1-2. This event is supported under the Market Access Initiative Scheme (MAIS), which brings together 22 buyers from 14 countries with 38 Indian companies.

Leather trends for the spring/summer 2013 collections through Modeurop are also highlighted at the show. The Central Research Leather Institute (CLRI) and CSIR organise the trend theme pavilion at IILF.

Speaking at the inauguration ceremony, Rita Menon, Chairperson and Managing Director, ITPO, said: ‘The ITPO was continuing to support the leather industry in India and will continue to help exporters in the future.’

At the opening ceremony distribution of the CLE Export Excellence Awards 2010-11 was presented by the State Minister. Superhouse won first place for the overall exports category with the second place to Mirza and third spot to Tata International.  The Minister also made several awards to a number Indian exporters from a number of market segments depending on the product category and company size. A full list will be available on the CLE website.

During the opening ceremony the CLE said that they will be providing an update on the development of tannery, Mega Clusters which was formally announced at the IILF in 2011 as well as releasing industry statistics.

The IILF is organised by the India Trade Promotion Organisation (ITPO) and the India Council for Leather Exports (CLE). 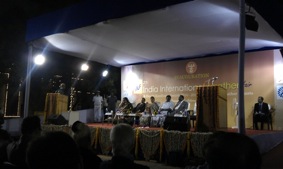