The New Zealand Leather and Shoe Research Association, and Invermay Agricultural Centre came together to measure the heritability of leather traits in sheep and deer skins to produce a riveting case study. Leather International presents the group’s findings.

What follows is a case study exploring genetic variability in New Zealand’s sheep and deer populations, with reference to a number of important skin traits, to be detailed accordingly.

A contingent of 305 slaughtered progeny Focus Genetics sheep-meat sires were evaluated for a number of pelt traits. DNA profiles were used to identify the skins collected post-slaughter; the animals had previously been genotyped with Illumina 600K HD SNP chips as part of a separate FarmIQ meat quality project. Considerable phenotypic variation for pelt traits was observed, with around 30% of pelts identified as suitable for luxury shoe leather production. Several key pelt traits associated with high-quality leather production were found moderately to highly heritable. This preliminary data will contribute to a larger study investigating if suitable lamb pelts can be bred or identified for use as high-value shoe leather.

A more traditional approach was applied to deerskins. A sample base of 11-month-old wapiti and red sire progeny were slaughtered and evaluated for 18 different quantitative and qualitative traits throughout processing to pearl-crust leather. For all traits except evenness grade of the pearl-crust leather, the relationship with pre-slaughter live weight covariate was significant and positive. Sire had a significant effect on eight traits, including critical strength and finished-leather attributes indicating genetic variability in these traits. This being said, larger numbers would be required for accurate heritability estimates.

This study provides a first insight into genetic variability in the properties of sheep and deer skins, and has wide-ranging benefits for other animal types, including cattle, where SNP chip technology is in an advanced stage of development.

The physical properties of lambskins were measured in a number of studies, as it is important to determine the uses to which lambskin leather can be used. Traditionally, lambskin has been used for clothing, a relatively low-value use, but with increased strength it could be moved into the more lucrative and dependable footwear market. In previous studies of large flocks of sheep, LASRA identified significant variations between milk lambs – those that are less than three months – and more mature lambs, that are often between six to nine months. A subsidiary study was made between black-face and white-face sheep of the same age. This suggests there may be genetic and agerelated factors to be considered.

Estimates of the genetic parameters for skin and leather traits in mammals are extremely rare in the literature. In sheep, the relationship between wrinkles and leather quality was investigated, finding that selecting animals without wrinkles improved pelt quality. Icelandic lambs were found to be particularly suitable for use in reverse-fur clothing due to their relatively lightweight and lower frequency of environmental faults, such as insect bites. Woolskin traits in Icelandic sheep were reviewed, with quality scored in a similar way to Gotland sheep. The curl, lustre and wool density was found to have low to moderate heritability across three studies. A number of pelt traits in an Icelandic sheep breed were also investigated, including thickness and double hiding in salted and tanned skins, with good correlation between traits measured on salted and tanned skins, and heritability scores for wool density. Ultimately, age was found to have a negative impact on wool quality traits in all studies.

In subsequent work, the characteristics and utilisation of special pelt products were reviewed from Icelandic, Swedish and Karakul breeds of sheep, focusing on specific pelt traits associated with these breeds, as well as Australian and New Zealand pelts. Results showed that pelts with high loose wool bulk were best suited for double face production but not as well suited to leather tanning.

Similarly in cattle, an autosomal recessive trait called vertical fibre hide defect (VFHD), which is a structural fault in collagen fibre orientation, leading to poor interweaving and weakness, has been studied in Hereford cattle. VFHD phenotypes were diagnosed in pairs of offspring and dams, and are broadly reflective of numerous analogous skin conditions in humans.

Perhaps the major difference in sheep is that hair sheep normally have better quality pelts than wool sheep although results can be variable. It has been found that significant improvements in the tensile strength and load of the skins of non-wool Morada Nova sheep compared with those from the wool-on breed, and the differences were partially explained by the relatively thicker grain layer on the wool-on sheep, and increased follicular and glandular density. In another study, physicomechanical strength properties were measured on indigenous Ethiopian and cross-bred sheep, which had their diet closely monitored. The cross-bred sheep were Ethiopian sheep, sired by Dorper sheep from South Africa. Dorper skins are regarded for their properties for clothing and gloving production. In this case, the cross-bred skins were found to have similar chemical characteristics and be of similar strength to those of the indigenous sheep, although native breeds tended to produce better leather.

The purpose of the studies was to investigate whether different physical skin properties, identified in the part-processed and resultant leathers, were related to the genetic make-up of sheep and deer, two economically important species for New Zealand. If genetic variability exists, this can be exploited to improve the quality of deer and lamb pelts, thereby increasing their value to farmers and skin processors.

The first of two trials was the more traditional evaluation of traits in red deerskins as part of the Deer Progeny Test (DPT), relying on progeny DNA pedigree information extracted from the DEERSelect database for analysis. It was conducted across three deer farms in New Zealand with the primary aim of genetic improvement, while reducing variation in important traits related to meat and skin quality. The skin traits reported here were measured on the birth cohort on hinds of the subspecies from two different age classes. The age classes in question were R3 and MA from Invermay farm in Otago, and Whiterock Station in Canterbury.

All progeny from each farm were transported and slaughtered on a single occasion, and animals were kept in lairage overnight with access to water and separated, then slaughtered the following day. Following removal of the skin postslaughter at Alliance Group Makarewa, they were quickly screen-washed with cold water to cool for two minutes. They were drained, salted using a standard commercial recipe, stacked on wooden pallets and stored covered with plastic for approximately 12 months.

Subsequently, the salted skins were wet back and processed through the commercial processing plant at New Zealand Light Leathers, focused for bulk production, with the only major difference being that the skins were undyed and left unshaved in the crust state prior to dry drumming.

The second trial was conducted on sheep progeny as part of the FarmIQ Awapai progeny test from terminal sire composites, mated to a variety of maternal breeds but most prominently Highlander ewes. The ewes were mob mated in large groups, with sires assigned to progeny through DNA pedigree. There were 75 sires represented in the data, with an average of five progeny each. All progeny were genotyped using the Ovine Infinium HD SNP BeadChip. Following removal of the skin post-slaughter, lambskins were collected and sent to Tomoana Pelt Processors for processing. At TPP the green skins were fleshed and individually labelled with a tissue sample collected for DNA identity matching. The skins were processed through to the pickle stage at the fellmongery using a standard commercial process and set aside at pickle grading for return to LASRA, where they were converted to crust leather using a standard process known to provide good strength properties.

Grain strain was measured on the depickled pelts after treating with Stahl’s Sortassist, a pH-dependent blue pigment that highlights grain defects. They were then photographed and scored for the extent and severity of grain strain on the flanks on a scale of 0–4. The two flanks of each pelt were assessed separately and the scores added to give a pelt score of 0–8. Further testing was conducted on the crusted skins after they were staked and toggled. Samples for physical testing were cut out using press knives, placed upon a hydraulic press and conditioned at 20°C and at a considerable 65% relative humidity for at least 24 hours before testing. Thickness of leather was measured in the neck, backline, midside area and belly. Leather thickness was measured using a Specht leather thickness gauge. Tensile strength and percentage extension of the leather was measured according to International Standard ISO, using an Instron Model 4467 Universal Testing System. Testing was performed in parallel and perpendicular to the backline in quadruplicate on each skin, with the results being averaged. The results were expressed both as the absolute force required to tear the leather, and as the force-per-unit thickness of the sample, as well as the values for each skin. Grain strength and extensibility was measured in triplicate for each skin using the ball burst test.

Finally, evaluation of flatness was carried out by an experienced assessor, on a scale of 0–4. Because values vary widely over the skin, with the neck region usually being significantly less flat than the rest of the skin, the neck area, the butt and the rest of the skin were assessed separately. The three figures were then added together to create a figure for a whole skin grading of 0–12.

To match the skin number to individual animals, DNA was extracted from tissue samples obtained from the lambskins. A Sequenom parentage panel was run on each sample, and these results were used to match to animal ID using stored HD genotypes from the same animals.

Data was analysed using least squares means analysis to test the significance of skin traits and responses of the various factors, and to predict the overall responses of these factors. Pre-slaughter live weight was independently fitted as a covariate. Sire had a significant effect on eight traits; all six crust leather tearing traits, pearl-crust leather evenness grade and wet-blue thickness. Farm had a significant effect on eight traits, ranging from wet-blue size and thickness, to crust leather strength. Wet-blue area, width behind fore legs, thickness mid-neck and mid-side were all significantly positive for the Invermay Farm. Crust leather strength was highly positive for the Whiterock Station progeny. Crust leather tear strength perpendicular to the spine and wet-blue thickness mid-side were the only traits on which mob had a significant effect. The responses for these two traits were negative for progeny of R3 hinds. Wet-blue quality was most skewed, with 204 skins in the top grade, 73 in the middle and eight in the bottom. 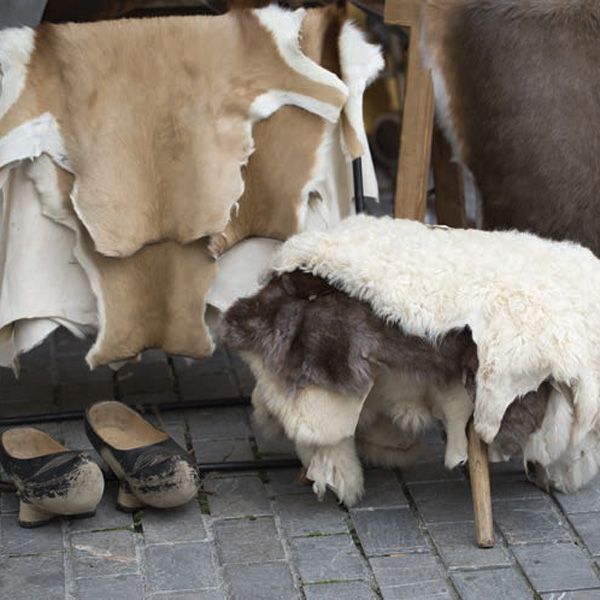 Many factors decide the quality of an individual sheep pelt. 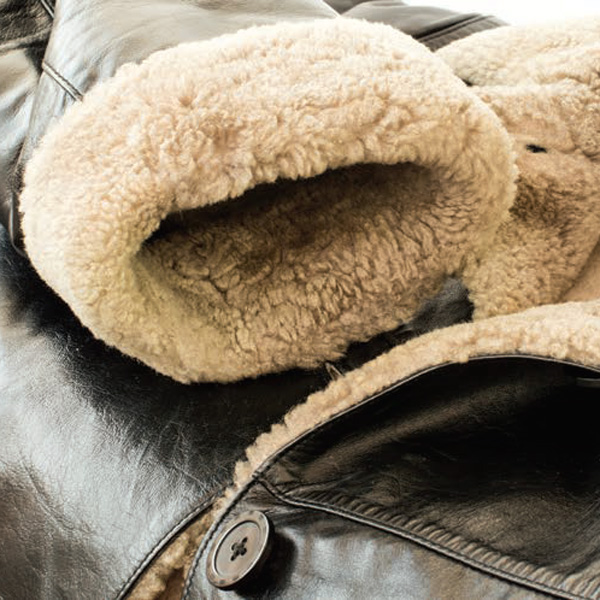 Pelts with high loose wool bulk were found to not be quite suited for leather tanning. 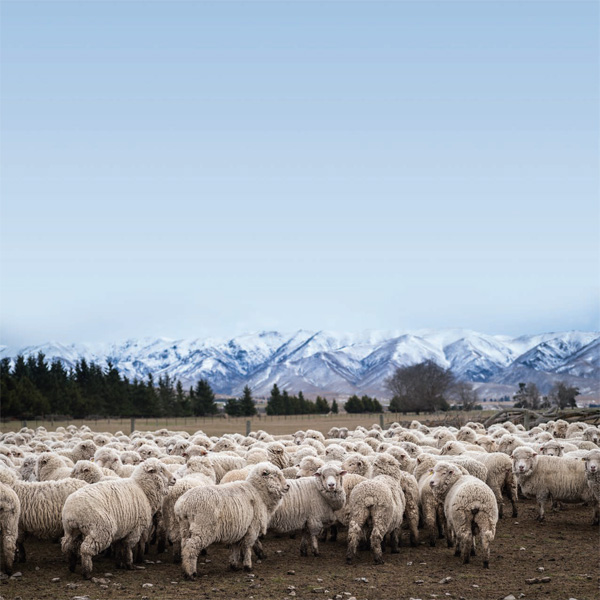 A sample base of 305 progeny of sheep-meat sires were used in the study of genetic variability.
Post to: