This year’s All China Leather Exhibition (ACLE) coincides with the 30th anniversary of the founding of the China Leather Industry Association (CLIA). With this in mind, Su Chaoying, CLIA’s honourary chairman, details the current state of the country’s leather industry.

China’s leather and footwear industries experienced significant growth in 2017. The sales revenue generated by medium and large-sized tanneries, and footwear manufacturers reached 1.37 trillion yuan – an increase of 3.08% from the previous year.

In 2017, the exports of leather and footwear industry achieved $78.7 billion, displaying a consistent increase of 3.11% per year. Among them, leather goods contributed 2%, swiftly followed by shoes. The imports of the leather and footwear industry reached $9.8 billion, an increase of 10.7% from the previous year, in which footwear contributed 5.49% to the growth of imports, chased by handbags with 4.51%.

In the first quarter of this year, the exports reached $16.7 billion, growing by 2.9% over last year, of which the handbags and suitcases contributed the most, while imports clocked in at $2.6 billion, up 16.7% from the same period last year with a 7.7% increase, in terms of growth rate.

Other statistics from the China Leather Industry Association (CLIA) showed the sales revenue generated by medium and large-sized tanneries were 159.16 billion yuan in 2017, a 1.57% drop from 2016.

From January to March 2018, the sales revenue increased by 5.5% in comparison with the same period the previous year. The imports of semi-finished leather were valued at $370 million, down by 3.1%, while the finished-leather value of $410 million decreased by 7% from last year.

In 2017, China produced 13.1 billion pairs of shoes, and the sales revenue generated by medium and large-sized footwear manufacturers totalled 773.8 billion yuan, up by 4.4% from 2016. In the first quarter of this year, the sales revenue achieved a 7.1% increase from 2017.

In April, the US announced its intention to impose additional tariffs of 25% on an initial list of more than 1,300 products it brings in from China; to Chinese exporters, these items have an estimated annual value of $50 billion. The measures came into force on 6 July 2018.

By then, China had announced a series of retaliatory measures, imposing increased duties on a series of products shipped to China from the US, calculating a total value of $50 billion. However, the US is now examining the possibility of imposing 10% tariffs on a further list of 6,000 products it imports from China, with a total trade value of $200 billion per year.

There are several hide, skins and leather products on the list with an annual trade value of $6.8 billion, including leather handbags, luggage and suitcases, small goods, leather garments, gloves, belts and leather shoelaces. Accumulatively, this accounts for 30.7% of the total value exported to the US from China last year.

It is believed that the tariff tête-à- tête will seriously affect the leather production chain in both countries.

According to CLIA statistics, the import of hides from January to March 2018 has dropped by 8% in volume and 15% in value. This is mostly due to the drop in demand from the Hebei region, but interestingly, other top clusters have increased their imports by 13%.

This is because the tanning clusters in Wuji and Xinji, Hebei province, are undergoing a second round of restructuring that will shrink the number of tanneries even more through mergers and acquisitions. However, it is expected that the production in this region will be back to normal by the end of 2018. From January to March this year, the volume of light leather produced by middling tanneries achieved 9.3% growth compared with the same period in 2017. This is a positive sign that the industry is consolidating and the imports will receive a further boost when the restructuring in Hebei region is completed.

China’s economy is shifting from export-led, investment-fuelled increases to advancements and consumption-driven growth that has brought new challenges and opportunities to the country’s leather industry. Shifting from a quantity-oriented to a technology and innovation-driven model demands serious investment.

Dealing with stricter requirements for pollution control, where much more investment is needed for the adoption of upgraded and cleaner technologies and equipment.

Labour costs are also accelerating, reaching approximately 4,500–6,000 yuan per month in terms of average salary, bringing a heavy burden to the operation of numerous companies. Automatic, digital and intelligent machines are therefore needed by enterprises to replace labour and improve production efficiency.

On noticing this, younger generations have shifted their purchasing behaviour from buying products at shopping centres to partaking in fervent online consumption. This forces manufacturers to develop new sales and promotional channels quickly, in order to maintain visibility and avoid being lost in a wave of consumer goods.

The Chinese Government is set to publish a list of chemicals deemed to take priority by the close of 2018. This will aim to set strict limitations for chemicals being used in leather and footwear manufacturing, but such a move will present more challenges for the tanning and footwear industries.

Although there are big obstacles to overcome, as well as a turbulent economy, the fundamentals for economic development remain sound. China has recognised the important role played by mass entrepreneurship and innovation for its future growth. As for the leather industry specifically, positive factors are definitely increasing. Many companies have already invested a lot or are preparing to direct more cash towards innovation, and are willing to introduce upgraded technologies and machinery. This displays a structured effort to deal with industrial pollution and rampant overcapacity. The goal is to change the economic growth model and produce higher-value-added products to cope with these problems.

In addition, many enterprises are making an effort to make the most of the internet as an effective tool for transforming the old product-centric sales model to a new customer-oriented and services-based business model.

For the tanning industry, it is predicted that automobile leather and furniture leather will still be the reliable growth point, while the demand for shoe leather will remain relatively stable. It is actually the need for garment leather that has reached the bottom.

The footwear sector is anticipated to recover slowly. Retail wise, the market for leather shoes is showing positive signs of thawing and warming up. The market of sports shoes – especially sports-casual and walking footwear for the elderly – will continue to grow rapidly, and the same trend will also take place for shoes made from synthetic materials. 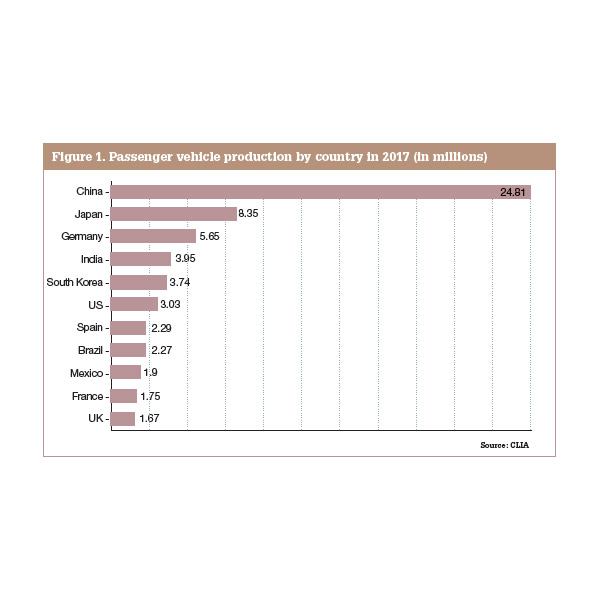 Passenger vehicle production by country in 2017 (in millions). Source: CLIA 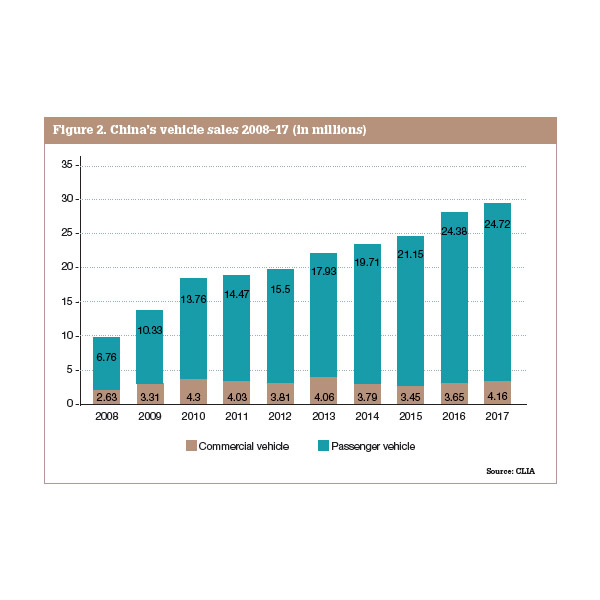 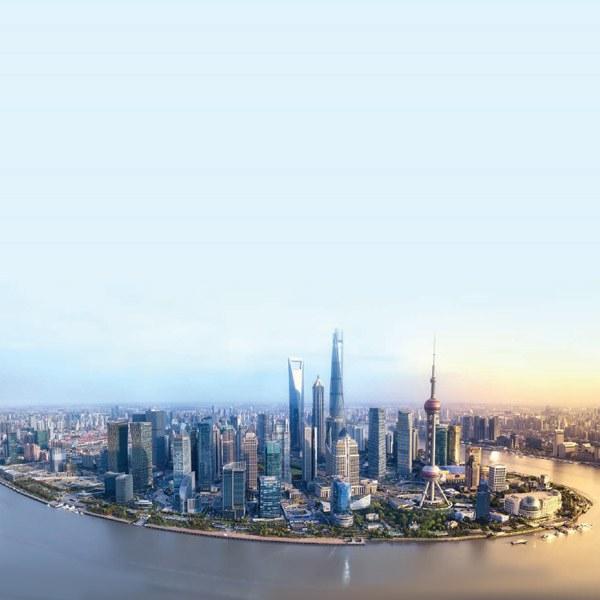 The Shanghai backdrop to the ACLE on 29–31 August. 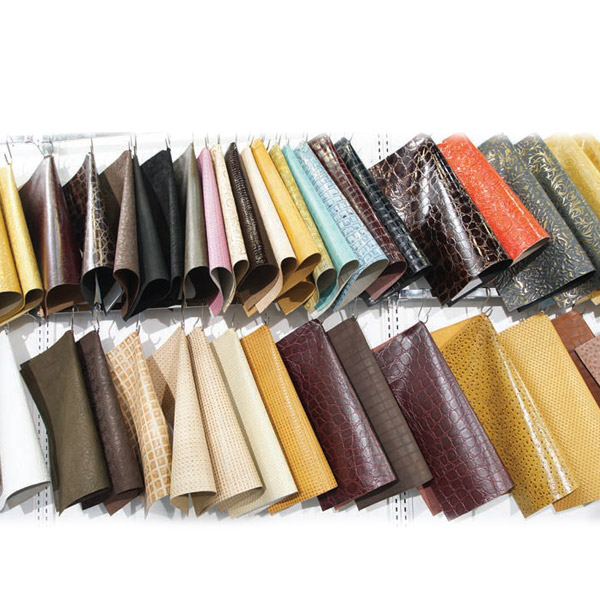 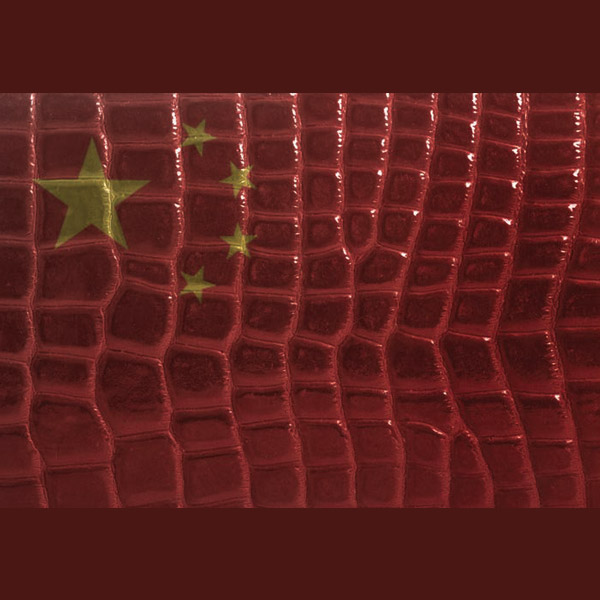 China’s ecnomy is undergoing a massive shift, in which its leather industry will face tougher challenges to limit chemical use and increase salaries.
Post to: