In Europe during the summer months, there is a lack of news that requires a good blasting. So with that in mind, Sam Setter takes it a little easier and decides to deliver a cautionary tale instead.

During the past few months, Ron Sauer has advised his readers in his various reports about a number of mainly Chinese buyers who take advantage of the drop in hide prices and either refuse to open letters of credit or want to renegotiate the prices of the contracts - on some occasions, twice or more. It resembles the situation that was faced in 2008, when sellers were frequently travelling to China in the hope of saving some of their money.

Sauer gave readers his view of this problem: "I think that what the associations should try to force is one big court case of one big and expensive breach to set an example for all. I also believe that if successful this is the only thing [that] may make other potential crooks think twice before they default in the future - one good, strong and clear example, with lots of publicity. The associations could maybe assist with lawyer costs or whatever."

"Our industry is divided and only follows individual interests, rather than engaging in a united front to face the serious issues at hand."

In theory, this is an excellent idea, but we already have a system that is called arbitration, which, objectively, as a system, doesn't work at all. The industry undermines itself because rather than holding firm as a block and demanding buyers stick to their contracts, there are always traders who, out of economic necessity or simply following the will to avoid the hassle of arbitration or other legal or semi-legal action, engage with buyers in renegotiations, and when one carries a lamb, the sheep will follow.

Our industry is selfish and only follows individual interests, rather than engaging in a united front to face the serious issues at hand. I maintain that this industry is regretfully damaged by individualism when unison is required. This industry is too small-minded to think big, too envious of the success of the next-door neighbour and/or too occupied with the possibility that a competitor may be more advantageous in a common action.

Dishonesty is rampant and people that are judged one day as 'most reliable' become crooks overnight. I have been informed about a case of a 'serious and honest' shipper becoming a crook, and what follows is the story of the disappointing experience of a small English trader. The names have been redacted as this will only serve as a cautionary tale.

Some time ago, the English trader in question had strengthened a relationship that had been successfully collaborated over a couple of years with a certain abattoir in Malawi, which was run by a husband and wife who own a cattle farm and the abattoir itself - which was privatised previously.

The abattoir in question, like most African companies, had brilliant plans, for which it sought money from friends and business partners, and so it borrowed important sums over the years from the English trader, which was correctly and regularly reimbursed through shipments of hides. All parties concerned were happy for a number of years, as the abattoir received interest-free money without the need of collateral and the trader got exclusive supply of the hides at workable prices.

In the meantime, there was an economic crisis that saw hides dropping to unheard of levels, but the partnership worked and adjusted the prices as they went down, and when they came up. All were satisfied and everything went well until certain Chinese traders came into the picture offering cash and better prices. This gave the abattoir a possibly unethical incentive as it would have advanced money from England and up-front cash from China, or the possibility that a single container of hides would be covered by two payments. So the abattoir started to give one container to the English trader and one to the Chinese instead of two containers to the original trader in repayment for the borrowed funds. Then the Chinese got two containers and the English trader one.

By the end of 2014, the abattoir asked the English trader to send $40,000 for the prepayment of a couple of containers of hides that were to be promptly shipped. The payment was needed for repairs - or some other investment for which they did not have immediate capital. In summary, the abattoir kept the money from the English trader and delivered the hides only to the Chinese.

Despite emails, phone calls and text messages over a period of seven long months, the abattoir simply ignored the trader's repeated urgent requests for shipment and the related reimbursement of money. The abattoir told many a lie and reversed its own stories during one telephone call - things that were verifiable in real time.

"If you have offers of hides or propositions from abattoirs like this, keep in mind that these people can be considered crooks until they have paid back the money that they borrowed."

Things changed in July, when the market dropped and the Chinese obviously either lowered their prices or simply did not buy at all. The abattoir woke up and told the English trader that they would promptly ship the hides that were supposed to have been shipped in December 2014 and January 2015. The trader, seeing the nightmare coming to a positive conclusion, named a market price for the moment that was obviously lower than the price that was agreed in December 2014. The abattoir, however, insisted that the contract price of December was maintained, which was an absurdity with the market reaching all-year low levels.

They were prepared to find a compromise - as if the abattoir was not in serious default but, rather, doing the trader a favour. At this point, the trader was deeply offended and refused deliveries that already had a commercial loss incorporated and demanded his money back. Promises were made but emails weren't answered anymore, messages were ignored and all went silent at the Malawi side.

Therefore, dear colleagues, if you have offers of hides or propositions from abattoirs like this, keep in mind that these people can be considered crooks until they have paid back the money that they borrowed. If the payment is made, it will be my pleasure and duty to report on that. However, if you want to trade with them, the suggestion is pay only after the goods are shipped with the bill of lading issued in your name. 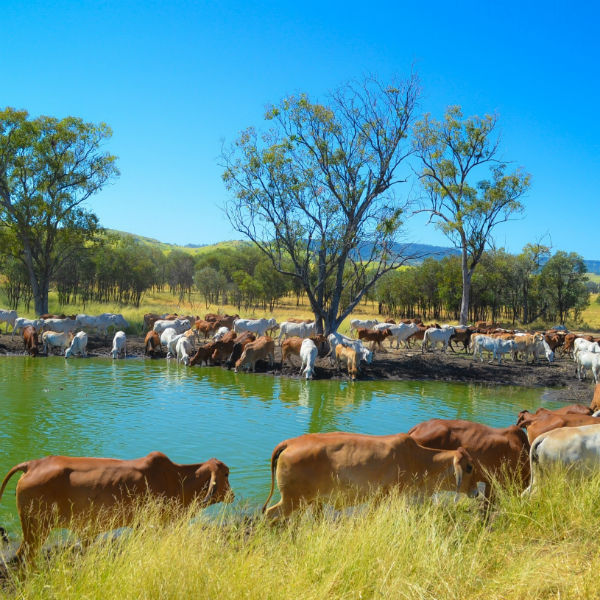 Cattle gather around a waterhole in Malawi – the home of one ‘criminal’ trader.
Post to: