Not even the ongoing trade war between the US and China, weakened demand and low prices could sully the atmosphere within the exhibition halls at this year’s ACLE. A mix of resolve and realism should see the industry right, as Ross Davies reports.

Shortly before the Shanghai New International Expo Centre opened its doors for the 22nd edition of the All-China Leather Exhibition (ACLE), one delegate told Leather International that he suspected this year’s shop floor might be decidedly quieter due to “market conditions”.

Elsewhere, a Pakistani tanner, who has exhibited his wares at Shanghai for some time, said forlornly that he was attending this year’s show only as a visitor, as he was unable to afford a stall due to poor economic conditions.

While one might therefore be forgiven for thinking that this year’s ACLE kicked off under a pall of gloom, it was far from self-evident. The 92,000m2 of exhibition halls – which included 16 group pavilions from 12 countries – were as lively as ever.

Over at the press briefing, the mood might best have been categorised as one of cautious optimism. Kicking things off, Michael Duck, APLF director, described 2019 as “one of the most challenging for the leather sector since the launch of ACLE in 1998”.

Duck attributed a series of factors – including low demand, low prices and an oversupply of hides due to growing red meat consumption – as contributing to the parlous point at which the market finds itself.

Duck, along with his fellow panellist Chen Zhan Guang, secretary-general of the China Leather Industry Association (CLIA), also spoke of the impact the US-China trade war, which continues to undermine business confidence.

However, both men were optimistic that a resolution to the impasse will come about sooner or later.

“This dispute will be solved at some stage – the sooner the better,” said Duck. “Then the curve of economic growth will start going up.

“I think the trade war does more harm to the general economy than the Chinese leather industry,” added Chen. Chen’s bullishness was mirrored by Peter Mangione, managing and director and founder of Washington DC-based Global Footwear Partnerships, who played down the impact of the trade battle.

“The duty is 15% – it’s not an embargo,” said Mangione. “The sale of footwear in the US is actually bouncing back. The demand side is on the up. When it comes to some footwear – especially women’s footwear – China is still the only place for US buyers. So, the outlook is good – I think this trade war will resolve itself.”

Chen went on to describe the performance of the Chinese leather and footwear industry as “stable” during the first half of 2019. While the sales revenue generated by national companies increased by 3.35% to reach 0.54 trillion yuan, exports stood at $36.89 billion, down by 0.15%, year-on-year.

Chinese tanners, meanwhile, have endured a tough time of it of late, conceded Chen, revealing that sales revenue generated by national tanneries in the first half of the year stood at 55.74 billion yuan, with output of light leather standing at 227 million square metres – down 10.93% compared with the same period last year.

Exports of leather shoes also took a hit, falling away by 4.7% in value to $4.33 billion. Exports of leather garments stood at 1.92 million pieces worth $61 million – down 5.5% and 20.6%, year-on-year. The US-China trade war aside, Chen said the main challenges facing the country’s leather industry were “the slow recovery of the global economy as well as stricter environmental protection requirements”.

However, when questioned on these negative results, Chen refused to be drawn into any doomsaying.

“It is hard to predict the exact future, but there are new opportunities for the Chinese leather industry,” he said. “The ‘Belt and Road’ initiative is helping to promote leather and make it more global. While they might cause pressure, new environmental protection requirements also help promote the upgrading and improvement of processes.

“The application of new technologies, such as the internet of things and cloud computing, have also injected new vitality into the industry.”

Nonetheless, the international leather industry presently faces a number of challenges. The increasing popularity of sneakers, in particular, has eaten a considerable chunk of leather’s sales and branding potential, as Leather International heard from Kerry Broyzyna, vice-president of US-based Wolverine Worldwide Leathers.

“Listen to the brands, because if they sell more shoes, we sell more leather. That means paying more attention to sustainability, which is so important for today’s brands.”
Kerry Broyzyna, Wolverine Worldwide Leathers

“Sneakers are the fastest-growing section of footwear,” he said. “Even baby boomers are into leather. We want them buying leather again, but if suppliers want to regain their market share, they need to be prepared for a dog fight.”

So, what can the footwear industry do to better compete with sneakers in the mall shopfronts? First and foremost, suppliers need to listen more closely to brands.

“Listen to the brands,” implored Broyzyna, “because if they sell more shoes, we sell more leather. That means paying more attention to sustainability, which is so important for today’s brands.”

40%
Market share of China, the leader of footwear exports.
APLF

If brands are serious about fulfilling sustainability commitments, then leather certainly has an ace up its sleeve compared with the current crop of synthetic hydrocarbons that have usurped its market share of late.

As Duck pointed out in his opening speech, the “incurable weakness” of such materials is that they are not biodegradable, and “contribute to the pollution of our environment, and the destruction of marine life and birds that populate our oceans”. Leather, on the other hand, is biodegradable, meaning it does not contribute to the “plastic soup”.

Broyzyna was speaking at the ‘Shanghai Shake-Up’ seminar – held on the second afternoon of the event – which looked at how the leather sector should go about transforming the role of the tanner and how to better attract designers. Such workshops have in recent years helped ACLE differentiate itself as an integrated event, as opposed to simply being a trade fair.

Delegates agreed that attracting designers, in particular, remains a perennial problem for the industry.

“We all know why designers don’t use leather – because of price,” said Hidenet’s Vera Dordick. “Everyone said they would start using leather again when prices came down, but they haven’t.”

For tanneries, innovation remains the watchword, insisted Jeanette Jost Collet, a Brazilian leather and material consultant based in China.

“We can no longer rely on the fact that leather has been around 4,000 years – we need to convince and reach the younger generation that this is a beautiful product,” she said. “We want them buying leather coats, leather shoes, leather products.”

Another problem facing tanneries agreed members of the panel – chaired by Leather Naturally’s Mike Redwood – is what to do with low-grade hides, which, on the whole, are discarded.

“What should tanneries be doing with these hides? Have tanneries lost their ability to innovate themselves?” asked Redwood at one point.

The general consensus was that for tanneries to truly push forward in the name of innovation, they cannot do it alone.

“Tanneries need outside help,” affirmed Collet. “They don’t have the people in-house to push through innovation. Instead, we have to look to partner with the chemical industry to make the right innovations.”

“We are 19 years into the century and we don’t seem to have a tannery that has produced a really famous leather that is being manufactured in millions of square feet, which people are looking to copy.”
Mike Redwood, Leather Naturally

“We are 19 years into the century and we don’t seem to have a tannery that has produced a really famous leather that is being manufactured in millions of square feet, which people are looking to copy,” said Redwood, answering his own question.

It was this kind of expression of self-awareness that defined this year’s ACLE. Leather International witnessed little evidence of an industry burying its head in the sand. As part of ACLE’s vow to represent the entire supply chain, some apparel stands could even be seen displaying synthetics – commonly regarded as a bête noire for the leather sector.

As Duck explained, “The fashion industry would not stop using synthetics if they were not allowed at ACLE. At the same time, this attracts more buyers for leather exhibitors on what is, in effect, a business platform.”

It is this mixture of resolve and realism that the industry needs to adopt to ride out the perfect storm in which it has been engulfed of late. 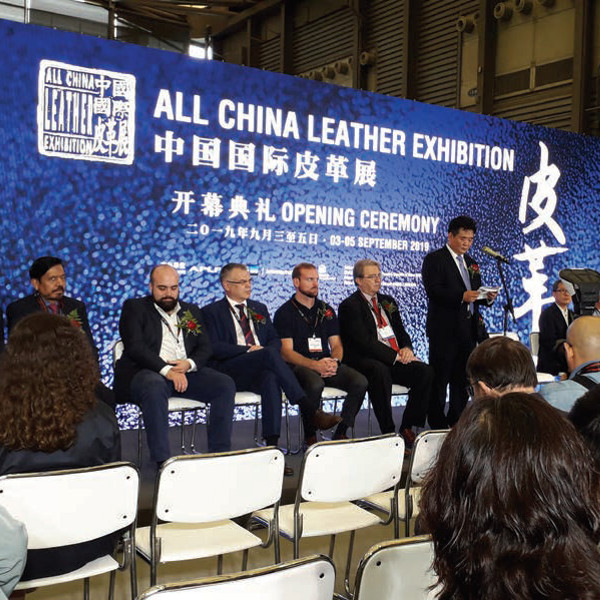 Delegates at the ACLE opening ceremony. 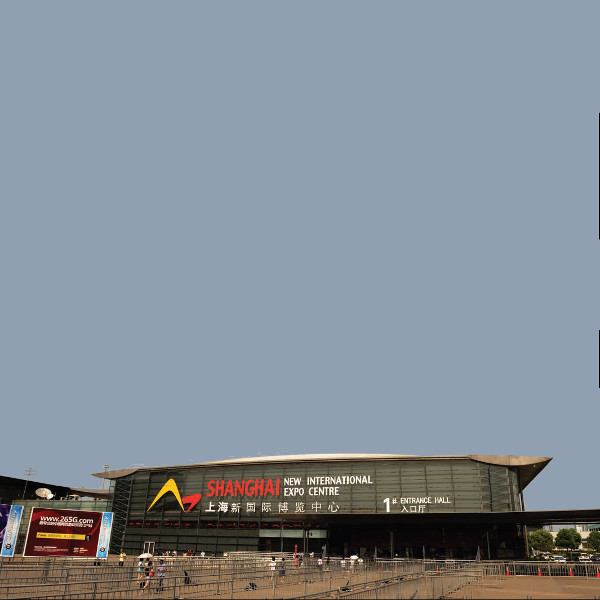