The delegates to the Global Leather Co-ordinating Committee (GLCC) – from ICHSLTA, ICT and IULTCS met for the 5th time in Shanghai, on September 4, 2012.

While the meeting provided an opportunity to review progress on ongoing joint projects – on prospects for an International Leather Mark, development of a database on legislation and standards in the leather sector, preparation of a technical information document on chromium III and chromium VI and preservatives available for leather producers, the main focus of the meeting was the report prepared for the UNIDO Leather Panel on the methodology for calculating the carbon footprint (and other environmental footprints) of leather.

The GLCC warmly endorsed the report, which was then in its final draft, and representatives of ICHSLTA, ICT and IULTCS came together again in Bologna on October 10, to welcome the formal adoption of the report.

The key point in the report is the conclusion on the “system boundaries” for leather production, which establishes that the calculation of the Carbon Footprint (or other environmental footprints) for leather production should begin at the slaughterhouse and end at the tannery gate when the leather is shipped. The effect of this would be to exclude any of the agricultural footprint involved in animal rearing from attaching to the hide or skin in most situations. This is based on the concept, put forward originally in a scientific paper in1999, that in the case of co-products and by-products arising from renewable materials, the carbon footprint, or other environmental footprints should be allocated to the “determining product” – that is the product for which demand determines the amount of production. In other words, animals are essentially raised and kept for meat, milk or wool and not for their hides and skins.

The partners within the GLCC will now collaborate on a project to elaborate further the detailed calculation of Carbon and other environmental footprints for leather based on the rigorous application of reliable data obtained from key players in the industry sector. 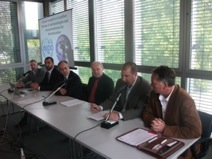 Representatives of UNIDO, Cotance, ICT, IULTCS and ICHSLTA at the meeting in Bologna, October 10
Post to: