A novel class of bio-based polymers has been developed by Life Biopol, an EUfunded project that aims to replace traditional retanning and fat-liquoring products in order to increase the safety of leather and shift to a more circular economy. The purpose of the project is to enhance the reuse and recyclability of different bio-derived waste and by-products from leather and the agro-industrial sector. This edited version of a white paper led by Lorenzo Taddei discusses the project’s findings and its efforts to produce eco-friendly and renewable biopolymers with high retanning and fat-liquoring characteristics.

These days, there is a general environmental concern regarding the huge amount of petrochemical-based substances commonly used in industrial processes. According to European Directive 96/61EC, the leather industry is highly demanding on the environment and requires integrated prevention and pollution control. Moreover, there is a growing demand for ecofriendly alternatives to replace hazardous, petro-based chemicals. High amounts of sludge and waste water are formed during the tanning process, which require expensive treatments in order to remove the pollution load.

Two EU directives – the Best Available Techniques Reference (BREF) documents and the 2008 IPPC directive – encourage the leather industry to develop safer and more sustainable processes. In this frame, Life Biopol is a project co-financed by the EU as part of the Life 2014–20 programme, which aims to synthesise a new class of biomass-derived biopolymers as retanning and fat-liquoring agents. The biopolymers produced are an innovative, eco-friendly alternative to traditional fossil fuel-based products, which are still the main class of chemicals currently used in the leather-making process. With a view to enhancing the circular economy, biopolymers are produced using raw materials derived from industrial waste and by-products.

Animal and vegetable biomass have been used as starting materials for the synthesis of biopolymers. Both the raw materials have been enzymatically treated to achieve lower molecular weight reagents, which better perform once they react with polyols and a condensation agent to produce the modified biopolymers. The optimisation of reaction parameters led to efficient protocols for the synthesis of biopolymers up to industrial scale, using a prototype plant specifically designed and built up.

The Life Biopol project intends to verify that:

The present work concerns the synthesis of retanning biopolymers starting from animal (A1) or vegetable (A2) biomasses, polyols and a condensation agent. The performance of biopolymers has been tested in comparison with traditional chemicals in the leather-making process.

Animal biomasses, such as proteins, are complex organic matrixes, which require the combination of several analytical techniques in order to provide detailed information about composition and reactivity. Proteins consist of peptide sequences, which lead to a heterogenous and variable mixture. When enzymatically hydrolysed, lower molecular weight chains are expected. The presence of several amino and carboxyl terminal groups make proteins a very reactive substrate that can be treated with various types of reagent.

As expected for complex molecules, the protein’s proton nuclear magnetic resonance shows numerous unresolved multiplets. The signals between 0.7ppm and 4.7ppm may be attributed of different CH2 moieties due to the various amino acids present in the biomass. A relevant signal is the singlet at 8.5ppm (Figure 1), which is supposed to correspond to -NH amide protons of the protein from animal biomass. The intensity of the signal is relatively modest, in accordance with the relatively low molecular weight of the protein.

This signal is also present in the spectra of the intermediates (Figure 3), even at different chemical shifts. The signal is diagnostic for amide bonds, which are present in animal biomass; it can be easily identified and usually is 8–9ppm; no superimposition with other signals is observed. A very weak unresolved multiplet is present at 7–8ppm, characteristic of the aromatic part of the protein.

This complex mixture of organic matrixes is reflected in the corresponding spectroscopic data, which shows a wide range of broad and overlapped signals that are difficult to predict. A study by Cadet found that fermentation of sugar cane juice could lead to the formation of lactic acid. Similarly, the same can be hypothesised for soya, which has a similar composition.

Characteristic doublet rising from the -CH3 methyl terminal group of lactic acid at 1.24ppm are spotted on (Figure 2). Upon reaction with a condensation agent, in the presence of polyols, hydrolysed soya reacts to produce new olefinic and amide bonds (Figure 3).

Chrome-tanned bovine hides with a thickness of 1.2–1.3mm were used to carry out application trials (Table 1). A1 and A2 biopolymers were applied to leather after the re-tanning formulation and comparison trials were carried out using traditional petro-based chemicals such as phenolic syntan and acrylic resin (Table 2).

The leathers treated with biopolymers performed well in comparison with the standard treatment, and showed environmental benefits. In particular, biopolymer A1 led to a very tight and firm crust, whereas biopolymer A2 led to a very full crust with a fine grain and pleasant feel. All the leather showed a good dyeability: a more brilliant colour and deeper shade than standard crust. The physical tests were performed on the obtained crust, as reported in Table 3.

The materials used for the synthesis of biopolymers were obtained from Codyeco, whereas the hydrolysed biomasses were supplied by Ilsa. A glass reactor fitted with a stirrer, heating mantle and condenser was used for the synthesis of novel biopolymers. The reaction was carried out at 50–100°C. Initially polyols were heated into the reactor and the biomass was added upon dispersing. The condensation agent was then added, and the reaction continued for several hours until the desired molecular weight was achieved.

The study shows that it is possible to recycle waste and by-products created by the leather and agricultural industry. Characterisation data confirms that interaction among reagents led to the desired biopolymers. The biopolymers produced are particularly promising for automotive leather due to the good reflectometric and gravimetric fogging properties. The resulting exhausted bath chemical oxygen demand for both biopolymers was lower than reference chemicals, meaning that the new products have less of an impact on the environment. 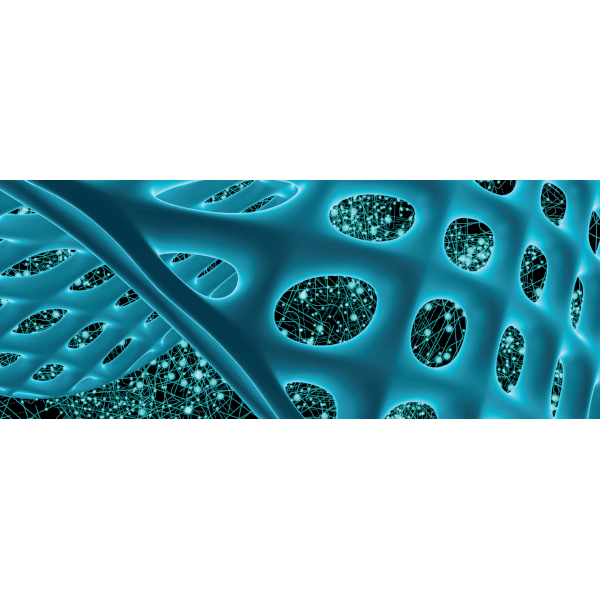 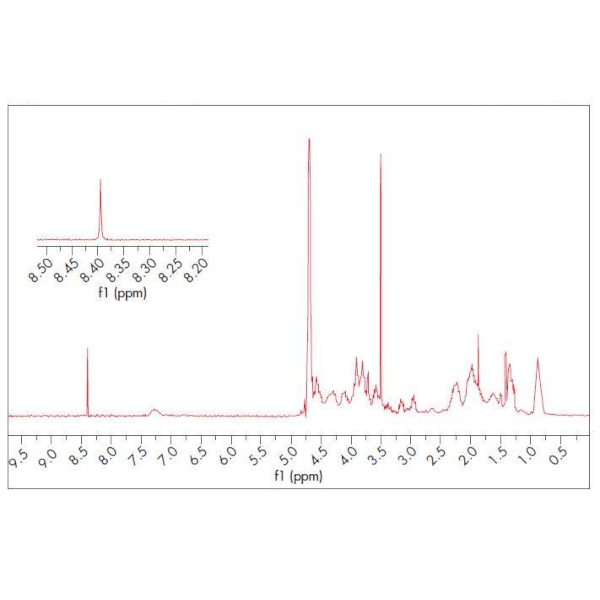 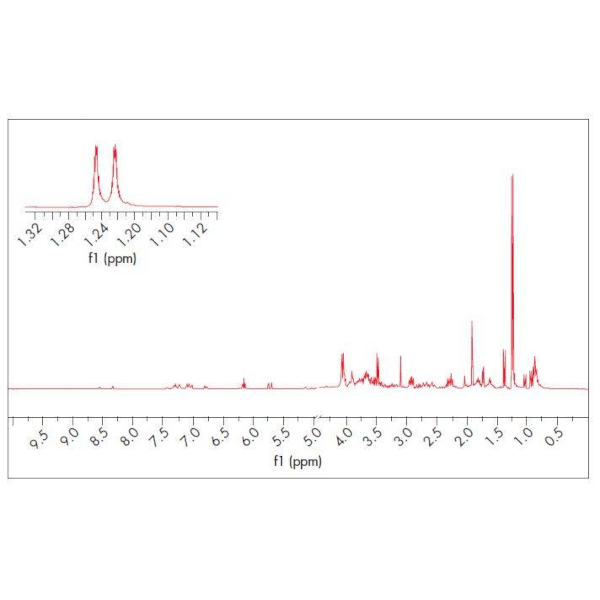 Figure 2. 1H NMR spectrum hydrolysed soya biomass in D2O; solvent peak has been removed for the sake of clarity 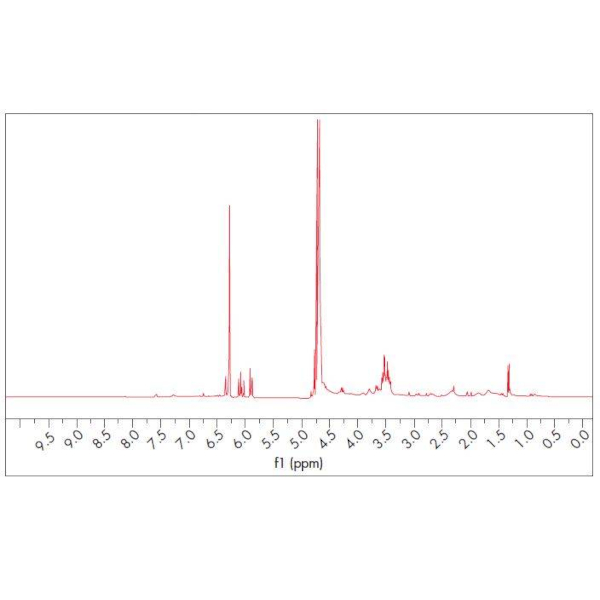 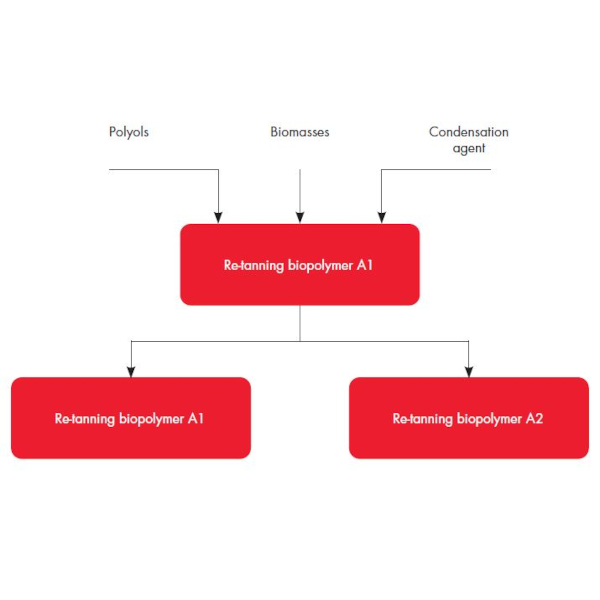 Scheme 1. General scheme for the synthethis of biopolymers 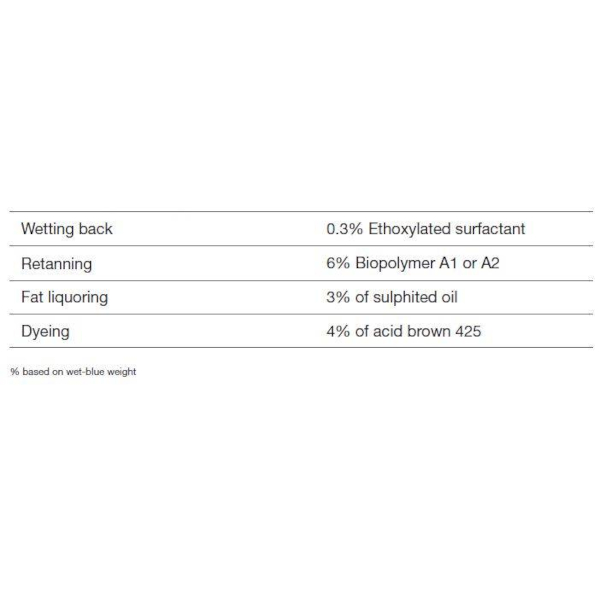 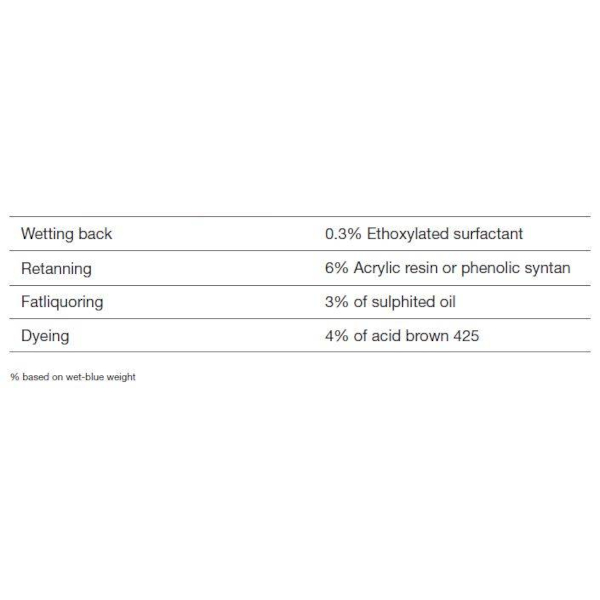 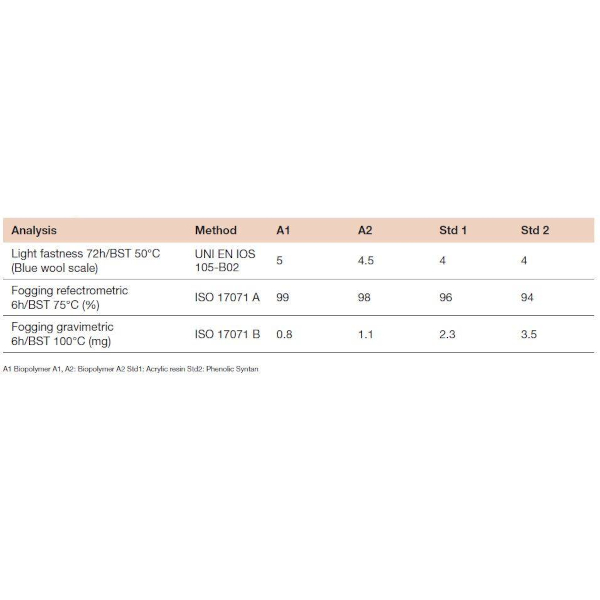 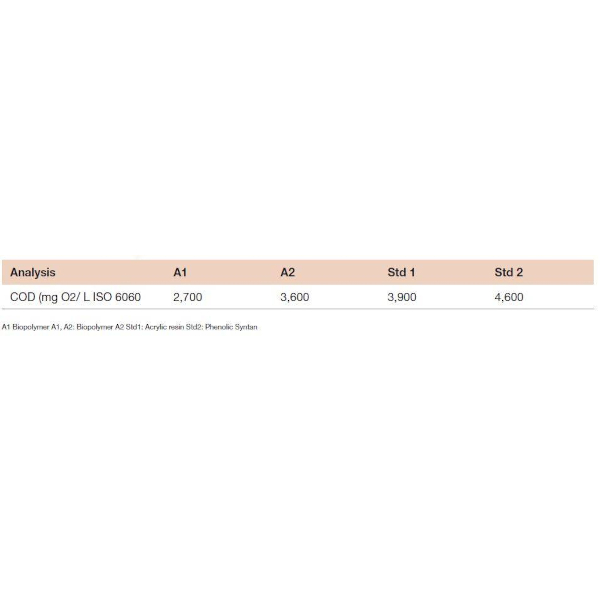