Over six days on 9–14 April, the Salone del Mobile fair in Milan attracted over 386,000 visitors, a significant increase compared with 2017 and a fitting testament to the event’s global standing across multiple industry sectors – not to mention leather’s versatility. Andrea Guolo reports from Milan.

Once, during the Salone del Mobile week in Milan, people said that leather had become the protagonist. Today we should add that, in addition to leather, tanneries have also become active protagonists during a week in which all the main news related to design is presented.

This year, for example, Conceria Superior presented a capsule collection of rugs – created by mixing the most precious silk yarns and the finest leathers – in partnership with the Illulian brand. Conceria Bonaudo provided its finished leathers at the Grand Hotel et de Milan, the place where the great composer Giuseppe Verdi stayed and died, for an installation called Travel Music created by designer Vito Nesta. Conceria Sicerp has also chosen a hotel, the Nhow in Tortona Street, to describe its production vision and the identity of the material, which remains a favourite of designers linked not only to upholstered furniture, but in general to home furnishings all over the world.

Another suggestive presence was that of the Japanese design studio Kuli-Kuli, which, based on the fame of Kobe beef, highlighted the quality of the leather with the Kobe Leather project, highlighting the circularity of the material and the transversality of its use, winning the first prize at the SaloneSatellite Award 2019.

The Salone del Mobile is an event of global importance and it is therefore normal that tanneries, even those not exclusively aimed at furnishing, are attracted by the possibility of participating in it and want to invest in the experience with their own presence. Moreover, even major fashion and luxury brands like Vuitton and Hermès took part in the last edition. The Salone, with its outsourcing for companies not strictly connected to furniture, is the place where they need to be for the launch of new products produced in 360° design – and the attendance numbers at the event reflect the excellence of the offer.

During the six days of the fair, on 9–14 April, the organisation registered over 386,000 visitors, a 12% increase compared with 2017. In addition to the main show were Euroluce, dedicated to lighting companies, and Workplace3.0, dedicated to office furniture. A total of 2,418 companies exhibited at the fair, of which 34% were not Italian; of these, 550 were designers participating in the SaloneSatellite.

The furniture business is in positive evolution. On a worldwide level – according to World Furniture Outlook 2019 and the forecast report on the furniture sector in Italy 2019–21, processed by the Light Industry Studies Centre (Csil) – the consumption of furniture, evaluated at production prices (excluding distribution mark-up), stands at approximately $460 billion and is expected to grow by 3.2% in real terms in 2019. China remains the main furniture manufacturer, with a 39% share worldwide, followed by the US, Germany, Italy, India, Poland and Vietnam. From 2009 to 2018, production in the Asia-Pacific region has more than doubled, reaching over half of world production, while variations in other geographical areas have been less significant.

Furthermore, about 30% of world consumption is represented by imported furniture, with the remaining 70% depending on furniture produced in the same country, which demonstrates that this sector is characterised by a production diffusion more widespread than that witnessed in the fashion industry. It can be said that there is no real geographical concentration; a lot of European countries continue (perhaps marginally) to produce furniture, even in countries where manufacturing no longer exists.

The main furniture importers are, in order, the US, Germany, France, the UK and Canada. On the export front, the main country is China, followed by Germany, Poland, Italy and Vietnam. In 2018, the international furniture trade reached $150 billion and forecasts indicate that growth will continue in 2019 and 2020. The fastest-growing regions will continue to be Asia and the Pacific (more than 4%), while all the other regions increase between 1% and 3% in real terms. For foreign trade in furniture, forecasts for 2019 are for a 4% increase in current dollar amounts of international trade.

In this favourable dynamic, Germany stands out. Almost one in every third piece of furniture (32.4%) produced in Germany is exported. According to Jan Kurth, managing director of the Association of the German Furniture Industry (VDM), sales abroad increased by 2.2% to €10.9 billion last year.

“This is the highest export value ever measured,” he said. “The Chinese growth market developed particularly strongly, with an increase in exports of 14.7%, and all the important markets in Europe showed a positive trend. For example, we were able to sell +6.6% to France, the industry’s most important export market, +4.4% to the Netherlands and even +11.1% to Italy.”

Italy is the second-biggest European exporter and in 2018 increased its foreign turnover by 2.7%, obtaining an active trade balance of €7.6 billion. China, the US and Germany are the top markets for development opportunities.

“The furniture industry is a pillar of the ‘Made in Italy’ [brand], worth €23 billion of turnover realised by 18,600 companies that employ 130,000 workers,” said Gregorio De Felice, head of research and chief economist for Intesa Sanpaolo bank group, presenting the figures on the eve of the Salone del Mobile. “It is also the fourth most important sector in terms of trade balance.

“Italy is increasingly projected onto international markets and reconfirms the competitive role for high-end production, ranking third with a market share of 10.4%, after Germany and China,” he continued.

The future scenario was released on the occasion of the agreement signed between Intesa Sanpaolo and Federlegnoarredo for €1 billion, which will be used to support investments in research, innovation and the circular economy of home system companies.

The favourable scenario therefore supports the prices of leather as a reference material, after years of downturn. The golden age for upholstered furniture ended in Europe with the entry into the euro and the subsequent devaluation of the dollar, which made the relocation of production in Asia more convenient for US and European furniture groups. In that period, for Italy, the furniture destination represented around 25% of the Italian tanning business compared with a current estimate of less than 15%.

It can be said, simplifying the picture, that the loss of furniture was absorbed by the automotive and leather goods industries. Nowadays, however, the Asian golden age has also ceased, because on the low end of the product there is a substitution effect of fabric or fake leather compared with genuine leather. The recent collapse of Brazilian TR1 quotations, a reference raw material for upholstery leather, and also of European cows, has not yet relaunched the use of real leather in low-end furniture, also because of the crisis in traditional retail. In fact, in the furniture sector, the wholesale channel has lost shares linked to large residential works and hospitality to the advantage of the contract channel as well as ecommerce. The latter is also starting to achieve success in Europe, where online furniture sales are estimated at €22–23 billion, while in the US they are around €33 billion, and in China close to $60 billion.

Moreover, ecommerce giants operating in the US include Wayfair, the leader with $6.7 billion in revenues in 2018, and Williams Sonoma (a total of $5.7 billion), half of which derives from the online business. It can be said, therefore, that the weight of these two channels is also increasing for leather furniture, since online purchasing is still a brake for the technically more complex solutions to be inserted inside a house (for example, kitchens), but not for a piece of furniture in leather or for an armchair, which can be delivered at home without stress for the consumer. And certainly, especially in the common areas of a hotel or in a series of apartments, the contract is leather-oriented because it becomes a material capable of increasing the perceived value of the property. It is true that today it is hardly possible to make a sofa completely in leather; more often, it is the result of a mix of materials that even luxury leather specialists such as Poltrona Frau have begun to insert. However, this has had positive results in terms of overall sales, underlining how it is the leather itself that determines the quality of the final product.

As further confirmation of the solidity of the leather, we can mention the case of Italian company Gamma Arredamenti, which works finished bull leather with thicknesses up to 4.5mm, purchasing them from Dani Leather Group. In 2018, Gamma Arredamenti achieved practically its entire turnover abroad, obtaining €23.5 million, with a forecast for the current year of €26–28 million following the expansion of its spaces to its most important customers.

A specialist in furnishing leather like Moreno Pertile, supplier of some of the most prestigious brands exhibiting at the Salone del Mobile such as Poltrona Frau and Luxury Living Group (producer of Fendi Casa, Bentley, Trussardi Casa and others), identifies the winning factor of leather in its ability to excite the end customer.

“Be careful, though, because emotion does not necessarily mean high price,” warns Pertile. “Even a mid-range product may be able to transfer to the consumer a sense of belonging to the product. And this aspect becomes economically important, because today the first grades in the raw material market are limited and we are competing with other destinations, from leather goods to automotive, to purchase them.

“And then you can use the second and third grades, which are also offered at very affordable prices, as long as a philosophy is built around the product that leads the end customer to accept that defect, considering it part of the essence of leather. And I am proud to be able to work alongside the new generations of architects, who are more and more competent in the field of leather, who have understood that it is not just the product that counts, as long as it has been designed by a renowned architect; instead, is the customer’s emotion and sense of belonging that counts for him, because in the home he must rediscover his lifestyle.”

In terms of product, the thickness continues to drive the supply of specialised tanneries because, says Pertile, “Few companies know how to work it and enhance it. But also anilines and nubuck are good because they are materials that can be applied in all areas of the home, up to furnishing accessories.”

At the last Salone, the finished leathers supplied by Pertile stood out in the offering of Cierre Imbottiti, which presented the first sofas made of cleanable aniline and nubuck. 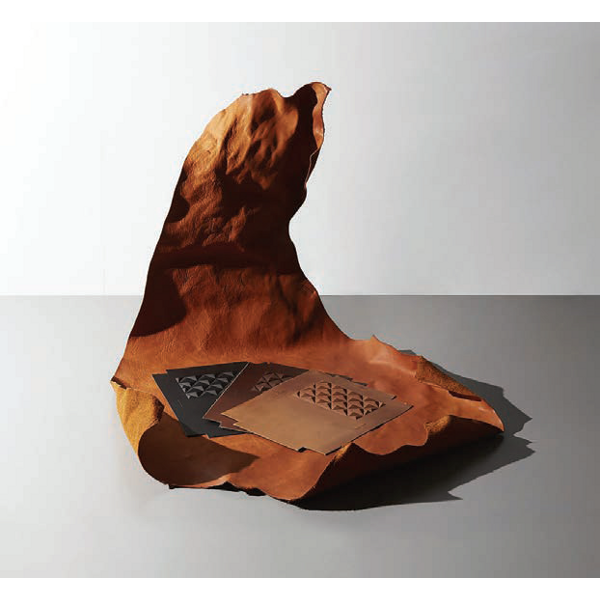 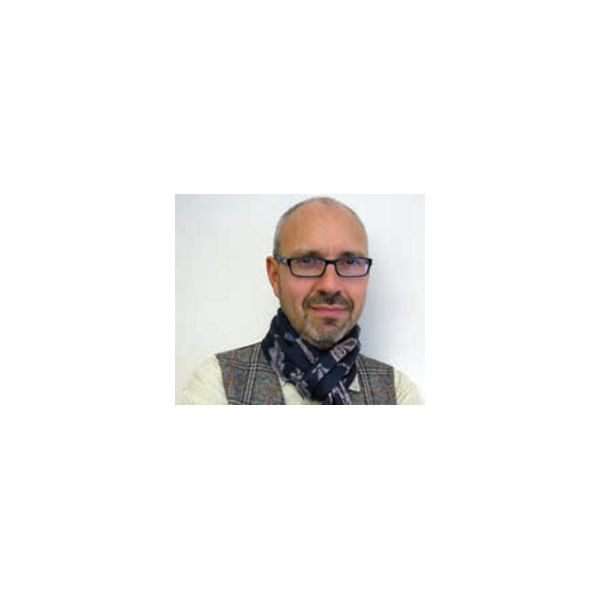 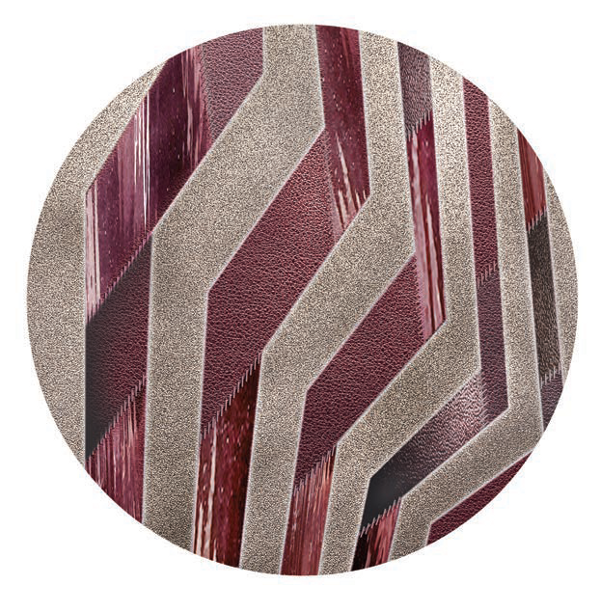 Conceria Superior and the Illulian brand presented an exclusive capsule collection of handmade rugs in Milan. 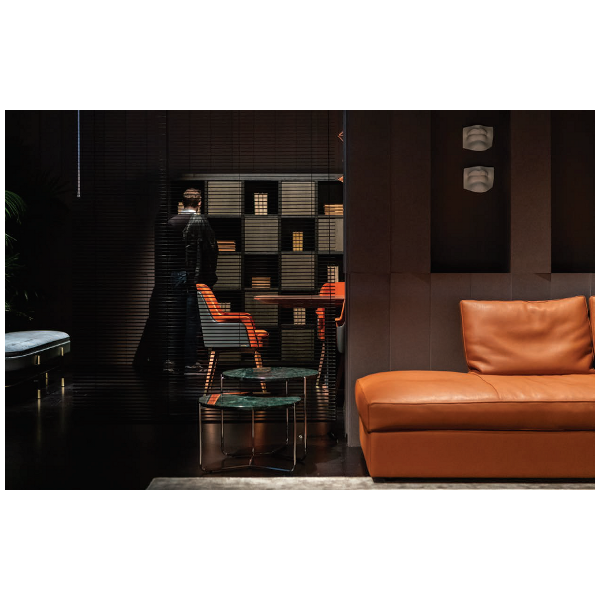