The thermal behaviour of bovine skin and wet-blue in varying humidity can be measured by differential scanning calorimetry. Michaela Schroepfer and Michael Meyer from the department of leather, collagen and biopolymers at the Forschungsinstitut für Leder und Kunststoffbahnen (FILK), in Freiberg, Germany discuss the process.

Afibril-forming collagen molecule consists of three similar, or identical, protein chains wound to a supercoiled triple-helical structure. In tissues, such as skin and tendon, these molecules are arranged in a fibrillar superstructure. Though many different ideas are discussed about the stabilising principles of these triple helices – as hydrogen bonds, electrostatic interactions, Van der Waals interactions but also hydrophobic interactions and stereoelectronic effects – it is now mostly accepted that a ladder of hydrogen bonds located between glycine and other amino acids internally stabilises the collagen helix.

Furthermore, the helices are surrounded by a network of water molecules, which radically increases thermal stability. While most investigations have only rendered indirect hints regarding this water network, some researchers have been able to model and calculate a surrounding water structure for collagen-like peptides, which has led to a more detailed understanding of the interaction of collagen and water.

While the TD of solved collagen is close to body temperature, that of fully hydrated pelt (tissue) without synthetic crosslinking amounts to around 60°C; with synthetic crosslinking with glutaraldehyde the TD increases up to 85°C due to a further restriction of the collagen triple helices. Stabilisation by chromium sulphate – the most important tanning agent – leads to TDs of up to 120°C. Thermal denaturation of collagen tissue, and also leather, is always irreversible.

The thermodynamic stability of collagen is determined by an enthalpic and an entropic part. Hydrogen bonds, which stabilise the triple helices, determine the enthalpic part. The reduction of the chain mobility, caused by fibril formation, crosslinking as well as hydration degree, is reflected in the TD and corresponds with the entropic part, which directly depends on the hydration degree of the triple helices and is also affected by cross-linking.

The following study aims to discuss the thermal stability of skin and wet-blue measured by differential scanning calorimetry (DSC) at different hydration degrees.

Unhaired and delimed bovine hides (pelt) were used for the trials as reference. Some hides were processed to wet-blues according to standard procedures. Calorimetric measurements were performed using a DSC 1, and samples of 10mg each were placed in DSC pans (Al-pan; medium pressure) and different humidities were adjusted by subjecting the open pans for different times to saturated water vapour, drying agent (storage in a desiccator over phosphorus pentoxide), or deionised water, which was directly added. The pans were then tightly sealed, weighed and DSC scans were performed at a scanning rate of 5°C a minute at 1–220°C to ensure that all relevant peaks were covered. After each scan, the pan lids were pierced, dried at 105°C at 100mbar overnight, cooled in a desiccator, reweighed, and the material humidity was calculated.

At high water contents (fully hydrated collagen), the DSC curves of pelt showed broad peaks and a long tailing up to 30K at the higher temperatures edge. Upon drying, the TSs increased and tailing was slightly reduced, especially at humidities lower than 10%. Tonset and enthalpies (_HD) were plotted against water content separately (see figure 2, page 35).The first region (I) was assigned to high water contents – greater than 44% in which the collagen was fully hydrated. Neither Tonset nor _HD changed when the water content was increased. The water could be removed by being pressed out at high pressure. Water then acts as a cushion between the collagen molecules.

A second region (II) was found between 22 and 45% water content. This water was weakly bound to the collagen between fibrils but had to be separated by convection drying, rather than mechanically. In this range, Tonset and _HD increased. The third region (III) covered 15 to 22% of water. Tonset increased, but _HD decreased steeply. At the transition of region III to region II – at around 22% of hydration – an enthalpy maximum of _HD~75J/g (joules per gram) was found, which was one quarter higher than had been measured in a fully hydrated state.

The latter was surprising, and was only found when soluble collagen was investigated. Water molecules no longer acted as a cushion between the triple helices, but in contrast, water seemed to act as a ‘glue’.

The remaining water molecules may cause this enthalpy increase by restructuring to collagen/water/collagen. This requires that direct water bridges are more stable than chains of water molecules between the collagen side chains. Direct hydrogen bonds and other bonds between the collagen molecules may also be possible, but such bonds are less likely to explain the enthalpy increase, because forced drying in the ranges IV and V causes the enthalpies to decrease again.

In region V, at less than 6% water content TD further increased, but _HD no longer changed. Less than one molecule of water/ triplet is then bound to the collagen and only heavy drying, especially by hygroscopic solvents, permits this state to be reached.

The wet-blues had a final chromium oxide content of 6.3%. While pelt denatured at 60°C (fully hydrated), TD increased up to 110°C by chromium tannage (see figure 2).

The DSC peaks became much sharper and, with decreasing water content by physical drying the denaturation, temperatures of the pelts and the wetblue samples drew near and fell together in dry state.

The increased enthalpies _HD of pelt, which were observed in the medium range of humidity (28%), not only disappeared completely when the collagen was chemically stabilised, but they became lower than that of pelt in fully hydrated state.

Still, no endotherm was found if the water content of the chromium stabilised samples was reduced below 6%. Then, neither DHD nor TD could be determined with the used DSC equipment. By rehydration of dried samples before measurement, however, the DSC endotherms reappeared.

In particular, the structure of these complexes depends on pH and time, but also on temperature, concentration and the kind of counterions.

Stabilisation of collagen by chromium differs markedly from other cross-linking agents. Recent MD simulations showed that water was an integral part of the tanning complex not only between the chromium ions but also between the tanning complexes and the collagen. Furthermore, hydrogen bonds as well as coordinative bonds were formed.

Upon drying, the water of polymerised chromium hydroxo complexes is removed in partitions at temperatures of 250° and 330°C. Therefore, chromium complexes are presumably not completely dehydrated when chromium-tanned collagen is in a dry state.

The loss of the collagen’s enthalpy in very dry conditions would require that these chromium/aquo/sulphate complexes stabilised the collagen structure as such, and that denaturation in dry state in this temperature range was no longer possible.

Therefore, these results can be explained as a competition for water between collagen and chromium sulphate. This is relevant only at very dry conditions, when water becomes a limiting factor.

Chromium/aquo complexes seem to be more stable than the binding of water to collagen. Dried collagen cannot denature because without water the structure is fixed and the molecules are not flexible. These results are also consistent with the observation that the DSC peaks reappear after rehumidification.

The dependence of TD and _HD upon cross-linking and drying has traditionally been investigated with tendon collagen from rats’ tails or solved collagen. Many of these results have also now been confirmed for skin collagen. Nevertheless, the exact principle for the enthalpic stabilisation of the collagen triple helix remains an open question.

When hydrogen bonds of collagen-associated water molecules are the main stabilising principle, the increase of the enthalpy through drying can be explained by direct water bridges between the collagen molecules.

In terms of the transition of water as spacer to water as a glue, at a very dry state, the enthalpy of chromium-tanned collagen disappeared, which could be explained by a completion of the chromium/aquo/complexes and collagen for water.

This article is an extract of an extended paper written by Schroepfer and Meyer. For further details about obtaining the full report, please contact Leather International editor Carl Friedmann at [email protected] 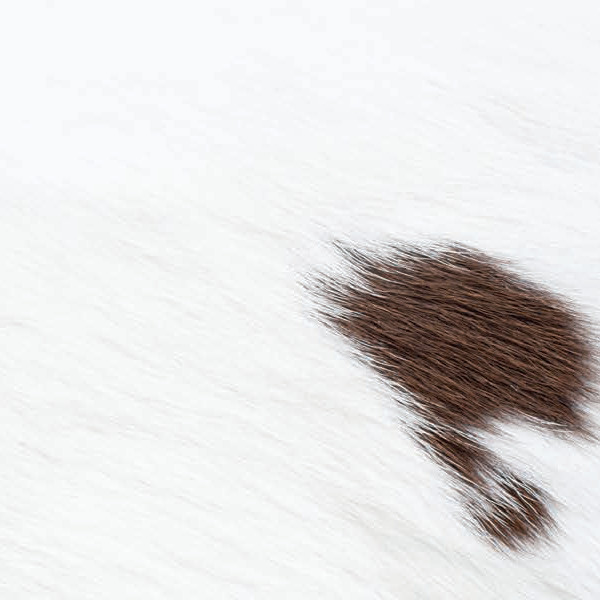 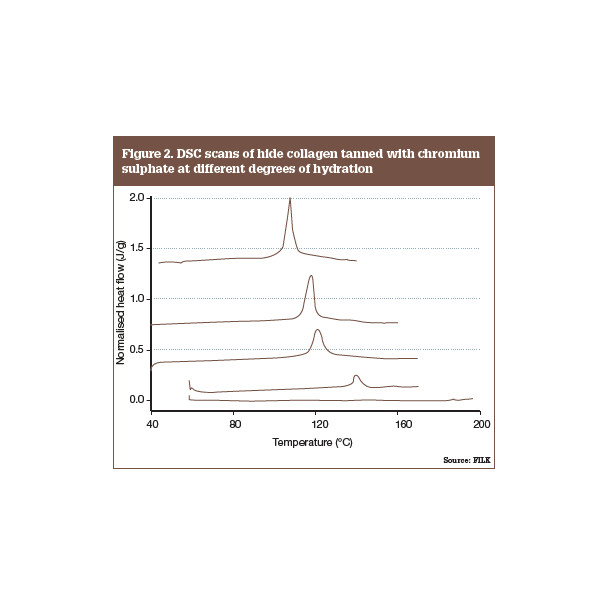 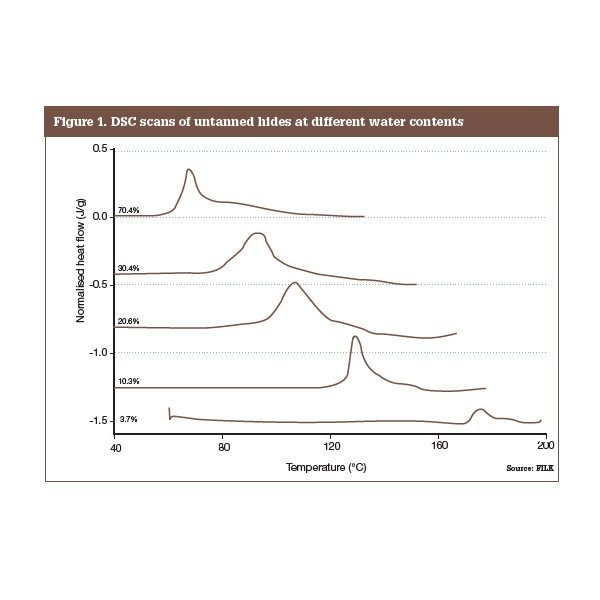