How to iron out stains – the rise of chelators

Whether in the form of filings, chemical salts, or even screws in horses, iron is the number one enemy of vegetable tanning. Karl Flowers, technical director of Authenticae and associate lecturer at the University of Northampton’s Institute of Leather Technology, explains how chelators offer an effective weapon against unwanted stains.

Anything ferrous has always been scourge of the tanner. The remedies used to combat its effects may be varied – and often as superstitious as witches flying over dairy farms – but generally include chelators. Whether in main tannage or in retanning, contact with any form of iron will shift the electrons in the cloud inside the polyphenol rings of the vegtan, changing the colour of any conjugated aromatic. In the case of dyes or vegtans, the rings and the electrons spinning inside them will then absorb, and hence reflect, different wavelengths of incoming light.

Take the case of bananas, which if left exposed to oxygen, will go brown. In this case, catechol (which forms a part of the polyphenols that give us the condensed tannins, for example mimosa) and an enzyme (polyphenoloxidase) make the catechol redden. The loss of the hydrogens off the catechol – making it a quinine – have caused a shift of the ring electrons and changed the colour of the phenol. Iron does something similar, causing our vegtanned leather to appear black or grey.

Even some replacement syntans can change colour when stained with iron. Metal staining of vegtan leather does not need an enzyme to change colour: the electron-hungry metal will attach uncatalysed.

Is it only iron?

Any cation can interact with the polyphenol, or dye, and alter its colour slightly. It is a well-known fact that cations can cause instability to the fatliquors and dyes that tanners use because the solubilising groups (generally anions) bind with the cations (H+, K+, Mg2+, Ca2+, Cr3+, Al3+, Zr4+).

These can bind to the solubilising groups (SO3-) that are often used to help vegtans dissolve, but they can also bind to the vegtans in the manner that is illustrated in figures 1 and 2 (above and right).

There is a big difference between an iron filing thrown up into the air during the grinding of fleshing, shaving, splitting machines and iron salt contamination (dissolved iron oxide) that is picked up in pipes or containers, or from the iron salts that are found in blood (haemoglobin).

A large filing is composed of millions of iron atoms, and the metal fragment often gets passively in between leather fibres, where it slowly degrades, spewing off iron atoms into its surroundings as it does so, potentially staining and restaining until it is completely dissolved.

Tanners today try to ‘quality control’ iron stains out of the process. ‘Clean’ areas in which light and vegtanned leathers are processed are completely iron-free.

In these, machinery that needs grinding are absent and air movement is ‘positive’ (dust-free air is continuously pumped in to prevent iron oxide dust entering), while water is softened (purged of calcium and magnesium), magnetised to remove iron particles, and then moved and stored in plastic pipes or containers.

The next stage is a little costlier. Chelators are necessary to remove iron stains from light-coloured or vegtanned leathers. Splitting and shaving of the vegtan leather will result in iron filings in the leather, causing black stains.

The most common polycarboxylate used is oxalic acid (IUPAC: ethanedioc acid). This is the simplest dicarboxylic acid, and is used to help acidification during the wetting back operation.

Oxalic acid is generally the cheapest chelator, and is the most widely used for clearing. It has two carboxylic acid groups that can ionise to decrease the pH, (pKa values of 4.14 and 1.25).

The oxalate ion, because of its negative charge, will be attracted to the iron, and can then bind, preventing it from linking to the vegtan. The metal, depending on its valency, can bind to two or more oxalic molecules.

If the iron is present as a filing, then the concentration of oxalic needed will be high. It is also important to remember that the oxalic molecule is planar, and hence very poor at shielding the iron atom from other ligands that may prefer binding to the iron. Iron stains often reappear on leathers for this very reason. Changes in pH may also cause the iron-oxalate complex to split.

New Calgon (supplied by Reckitt Benckiser) is very different from the old Calgon used to soften water and to remove iron.

The modern mixture contains many other sophisticated components that help improve detergency in your dishwasher, from water softening to optical brightening.

Sodium hexametaphosphate (SMP) is often underestimated as a chelating agent. If a tanner wants better emulsions, brighter dyeing and increased penetration of their chemicals, then SMP is an option that is well worth investigating.

It belongs to the phosphonates, a class of chelator that contains multiple phosphoric acid groups that deprotonate and then can bind to metals through their negative charges. SMP is not always thought of as a chelator, except by a few vegetable tanners, who use it as a conditioning agent/chelator for the first veg colouring.

SMP can wrap around a number of metal irons to keep them away from vegetable tannins and represent a medium-level cost (with oxalic acids at the bottom, and aminopolycarboxylates at the top).

The first of the APCAs widely used in the industry is ethylenediamine tetracetic acid (EDTA). Through the reaction of ethylenediamine, formaldehyde and sodium cyanide the APCA is produced.

For high-performance tanners that have rigid formaldehyde levels there are a number of precautions to bear in mind if you are using EDTA for clearing iron on light- coloured crust:

NTA is a type 2B carcinogen, limited to a no-observed-adverse-effect level (NOAEL) limit of 92mg/kg bw by day2 . Most responsible chemical companies will supply a good grade of EDTA, free of formaldehyde and NTA. That EDTA can then be used as a highly effective chelator for water softening, or iron stain removal. As can be seen in figure 3 (above), the EDTA can bind to the metal with its four acetate arms and with its two nitrogen atoms, making for a six-link chelate complex. It is extremely effective at protecting the iron from the vegtan, and is very hard to undo.

It is easy to underestimate chelators’ contribution to the quality of retanning, dyeing, and fatliquoring. The control of iron during vegetable tannin use is challenging; tanners must find a way to balance cost, quality, and durability of the ‘clear’.

It is not advisable to use large quantities of oxalic acid simply because it is cheap. Sometimes, a more expensive chelator at a lower concentration can have the same, or a better, effect. Tanners may even find a combination of oxalic and EDTA may suit them best. 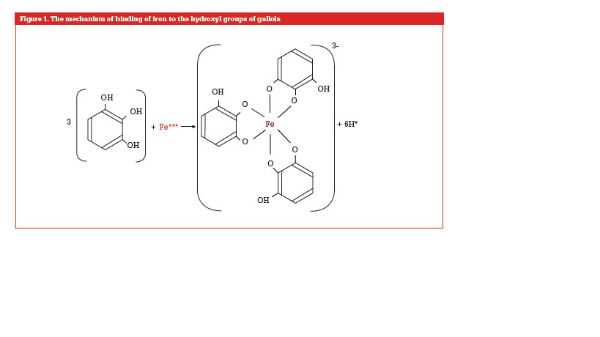 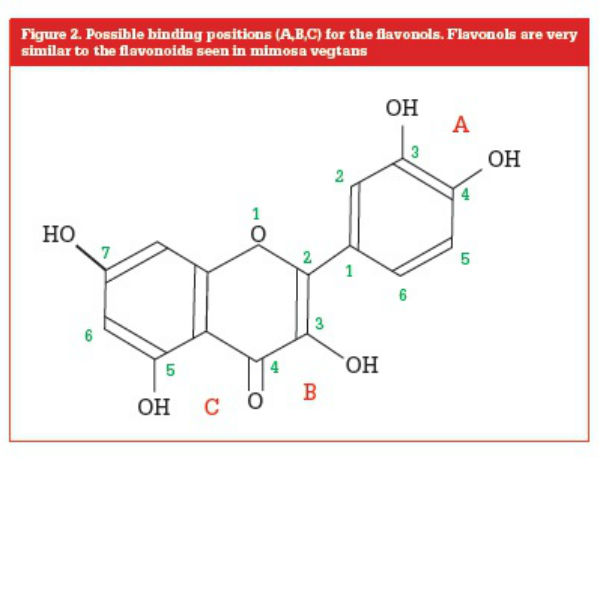 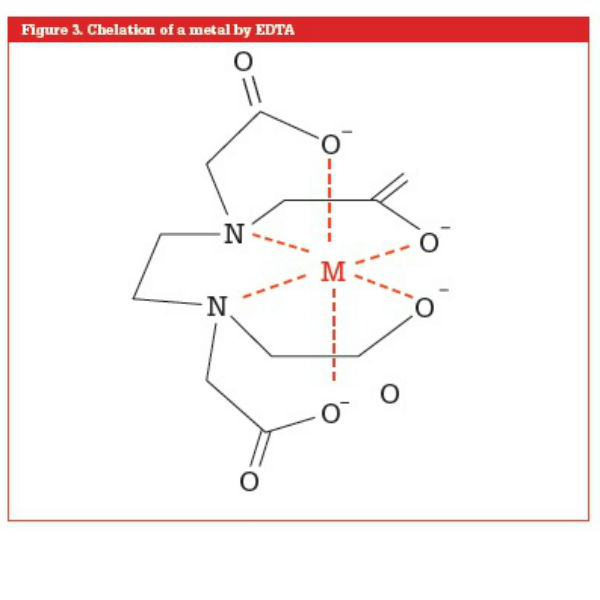