Grading leather is crucial to determining its value, but the process is painstaking, labour-intensive and subject to human error. The Central Leather Research Institute’s Malathy Jawahar explains how intelligent, real-time leather defect detection systems can be achieved using image processing techniques based on artificial neural networks.

Inspecting quality is very important in assessing leather’s effective cutting value. As a natural material, its quality varies due to inherent variation. The price of the skin or leather varies considerably with the selection, so grading is done with great care and by experienced operators.

Manual inspections are highly subjective, though, and any differences in opinion can lead to disputes between buyers and sellers. It is also tediously repetitive, and fatigue can lead to defects passing unnoticed, leading to inaccuracy and inconsistency.

Consumer goods are increasingly under scrutiny. The global market places higher demands on quality, which means that quality control in leather production has never been more important and some form of objective quality assessment could play a vital role in meeting user requirements.

Establishing cutting value during manufacturing is based on the number and location of defects on the leather substrate. Because of this, the price of the leather varies considerably, which is why experienced assorters are necessary. There is no universally accepted grading system to describe surface defects, and each buyer or seller sets their own rules, which is how disputes can arise.

Computer-aided analysis provides a way for automatic surface inspection and defect identification. Image scrutiny and pattern recognition using mathematical algorithms based on texture have been employed to understand the nature of defects captured by the industrial CCD cameras.

Texture analysis of the images gives an overall perspective of the spatial distribution of pixels. Image texture gives information about the spatial arrangement of intensities in an image. It works in a way that is similar to visual perception in humans and handles uncertainties very effectively. Texture analysis includes collective analysis of local pixel regions, rather than relying on spatial information from single pixels. The goal is an intelligent, real-time defect detection system that is able to give quantitative descriptions of leather surface images for classification.

Wavelet transform is very useful for detection and matching applications. Multiresolution analysis is one of its important features. The application of repetitive low and high-pass filters gives the coefficients in four quadrants, such as approximation (low/low frequency), horizontal (low/high frequency), vertical (high/low frequency) and diagonal (high/high frequency).

Manual inspections are highly subjective… and any differences in opinion can lead to disputes between buyers and sellers. It is also tediously repetitive, and fatigue can lead to defects passing unnoticed, leading to inaccuracy and inconsistency.

Intelligent, real-time leather defect detection systems are designed to identify surface defects automatically. The leather imaging set-up consists of a feed and delivery rollers and a CCD camera attached to scanning carriage. As leather is conveyed by the rollers, a scanning carriage moves the camera horizontally, capturing ten images in each row (the number of rows varies between ten and 12). The size of each acquired image is around 1,600×1,200 pixels. The database contains a representative set of defective and non-defective samples that are used for training and testing.

Image Processing Toolbox technology was used to capture the whole leather surface: the images aid real-time monitoring of the defective and non-defective regions (see figure 1). To speed up computation time, the images were converted to greyscale and transformed to wavelet domain.

This led to high SD, MAD and CV values and randomness, with high entropy value. Defects such as chrome patch, dye patch and so on appear as smooth textures with variable intensity patches.

The extracted discriminant texture features values were given as input to the ANN to classify the leather surface images as defective and non-defective (see figure 2). Initially, with known input-output pairing, the network was trained for 10,000 epochs. The network converged after 8,552 epochs with an error threshold of 0.118, underlining the accuracy of the test data. After training, the network was used to identify the defective and non-defective regions of the unknown whole leather images. Classification accuracy was above 90%, with chrome and dye patch defects showing close margins.

Using image processing algorithms and neural networks for identifying leather defects appears to be a promising means of achieving automatic inspection, and has shown the technical feasibility of an intelligent real-time inspection system that would eliminate human error. Automated inspection systems can accurately identify the surface defects to provide a consistent quality inspection, thereby increasing productivity and reliability.  ?

If you would ilke any further information about this article, please contact Leather International editor Carl Friedmann at [email protected] 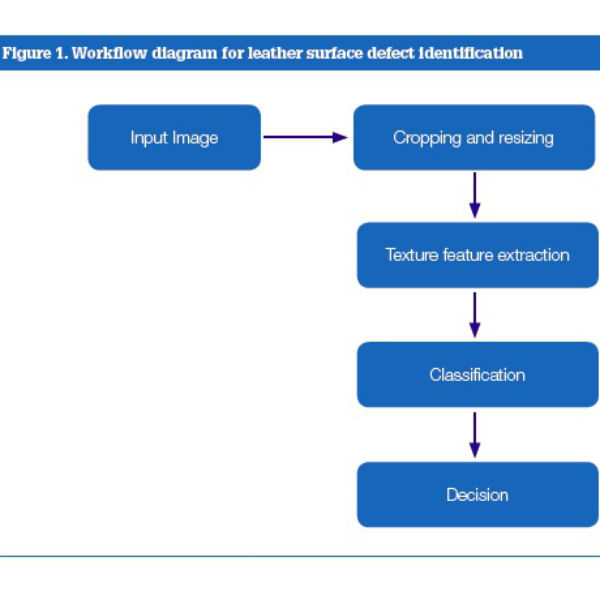 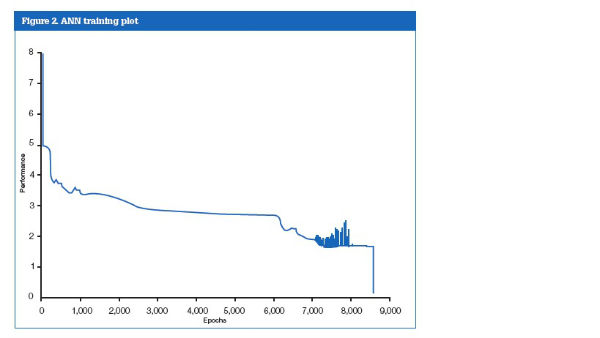