Is there a difference between tanning and leathering? Karl Flowers, senior lecturer in leather technology, Institute for Creative Technologies, University of Northampton, looks at the specifics of terminology within the industry to distinguish one from the other.

At the turn of the 19th and 20th century, asking if there was a difference between tanning and leathering was an important question.

The tanners of the time were struggling with solving the post-tanning operations problems of metal-tanned leathers to allow leathers to be produced that were clearly identifiable as leathers. Modern tanners know that in order to produce full, soft and strong leathers, the metal tannage needs further treatment. It also seems to be the case that in metal-free tannages (such as the glutaraldehyde tannage) that significant post-tannage is necessary to achieve what tanners would say is leather.

Definitions are constantly changing and becoming better as people identify loopholes and ambiguities. The current accepted definition of the word 'leather' is shown in 'Leather definition' (opposite, top right).

BS EN 15987:2015 is the European standard used to set the legal position of the word 'leather'. This means that all incorrect uses of the word leather by vegans and those constructing composite materials is unfounded and is subject to challenge by trading standards bodies.

The phrase 'textile fibres' is specific and makes reference to Annex I of Regulation (EU) No 1007/2011. Leather fibre is not included in Annex I, but if any other materials from Annex I are included then the composite reverts to being a textile because of the definition given. Further clarity has been given by previous articles and by EU Footwear Labelling Directive (94/11/EC).

In Tanning Chemistry: The Science of Leather by Anthony D Covington, five major themes were focused on:

The sixth theme in the book is more of a qualifier of a degree of permanence of the above properties so is not included in this article. Some of the five themes given above are also what tanners would classify as leathering, which will be discussed in a bit more detail below. Using the five themes above, a tanner can simply tick off to see whether the product they have has been tanned.

As the industry processes more chromium-free leathers, one property becomes more apparent - as you use fewer filling tanning agents for main tannage, tanned leather has to receive additional post-tannage. That is
if you want the leather to have the look and fullness of vegetable-tanned leather. This is related to two properties:

There is a distinction between material that has been tanned and one that has also been leathered, and this author feels that a definition should be constructed to draw the distinction between the two. Some leathers currently do not conform to mainstream definitions, but are undoubtedly accepted by the industry as leather. This article will cover two examples: Japanese Himeji white leather and traditional sword scabbard leathers.

In the photomicrograph (see image, above) it can be said that the leather fibres of the Himeji leather can be described in two ways: blocks of leather fibre with good separation and other blocks of badly split fibres (with associated hardness). Himeji leather is an attractive, strong leather with a shrinkage temperature of 69°C. The Himeji tannage is by definition simple and offers almost no increase in thermal stability. The leather is not soft and the fibres do not separate, except through rigorous mechanical means. There have, to date, not been rigorous microbial resistance testing so not much comment can be made about it, but one would assume that, given the correct moisture content, the leathers are not tanned and would rot. One could argue that they are leathered and deserve the term 'leather'.

The second leather type, sword scabbard leathers are vegetable-tanned leathers with surface tannage only. The inside is left to be untanned, which gelatinises upon drying to give an untanned layer highly resistant to blade penetration. Part of the tanning definition is met, like the Himeji leather, but there are components (layers) of the leather that do not. The tanning definition makes no mention that the themes required should be present throughout the cross-section. Should the definition of leather/tanning specify how much gelatin (in the final product) is allowed? There are other complications, namely that more definition is needed surrounding the second-last theme given above.

Research done by de Carvalho in 'Leather with high biodegradability: a new step in sustainability' gives a tanner insight into the future requirements of leather - controlled biodegradability, which can be triggered. Currently, BS EN 20200:2005 is the method used to measure the biodegradability of leather by composting. The size of particles that can pass through a 2mm sieve after 90-180 days is measured.

The leather definition states that it must be resistant to microbial attack and the tanning definition (from IULTCS) goes further to state that the product must be: "...capable of being wetted and dried without loss of these properties". The industry needs a standard for the quantification of dry and wet-leather during enzymatic degradation. It would also be highly useful for the industry to have a metric that indicates the duration (via normal or accelerated testing) of the biodegradability to give the user an indication of how persistent the material is.

The leather industry has good definitions that are constantly improving. I propose two further changes to current definitions to allow clarity in working practice. It is suggested that the industry creates a formal definition of leathering that maybe encapsulates the two points given above (filling and fibre-splitting). It is also suggested that the industry commission a study into what is meant by imputrescible and how it is measured, and adopt two standard methods - a standard for dry/wet resistance of leather to collagenase, and the adoption of BN EN 20200:2015 as a short-term description and an accelerated test (as yet not invented, to handle persistent biodegradability; for example, longer than a year in compost). 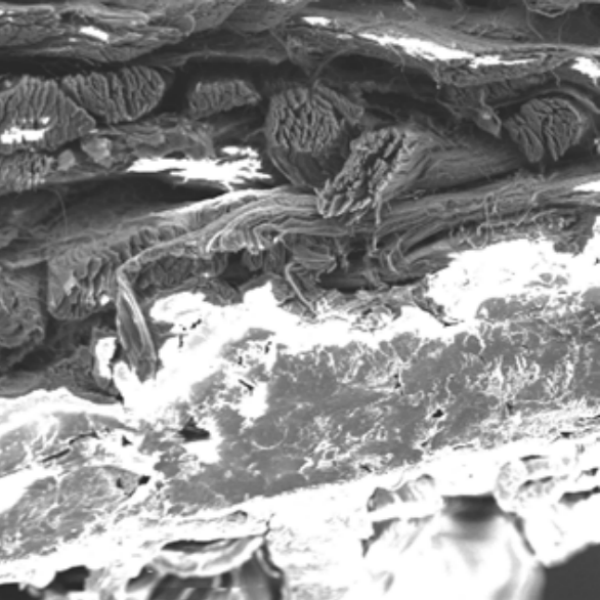 Sword and scabbard of a Dafmio, from the Arima family, 18th century.
Post to: