The 31st International Union of Leather Technologists and Chemists Societies (IULTCS) congress began with the Heidemann lecture delivered by Dr Heinz-Peter Germann the Director of the LGR in Reutlingen, Germany. The paper was titled ‘A natural plant crosslinker from olive waste for leather tanning’.

Around 300 people attended the three-day conference (September 28-30) from around the world, which took place at the SH Palace hotel in Valencia. The largest number of delegates came from China (47 with a further group of 13 from Taiwan) and the current IULTCS president is Professor Bi Shi from the University of Sichuan.

During the official dinner given on September 29 the IULTCS Merit Award for excellence in the leather industry was presented to Antoni Ylla-Catalá by Professor Bi Shi. The award was in recognition of his 43 years in the tanning industry where he has held a number of senior technical positions with a number of tanneries as well as past presidency of Aqeic and the IULTCS nomenclature committee.

Following Heidemann lecture on the first morning was the Aqeic lecture was delivered by Anna Bacardit of the Igualada Engineering School in Spain and was titled; ‘Study of the weathering variables on chrome-tanned leather ageing’. Aqeic, the Spanish leather chemicals manufacturers association, were the hosts and organisers of the 31st congress. 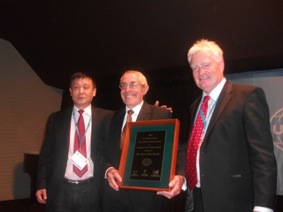