Lanxess – leather a strong performer in 2010

Lanxess achieved very good results in 2010 due to its strategic set-up and the general recovery in business. Sales in 2010 rose 41% year-on-year to €7.1 billion, driven by strong volume growth and price increases. Sales of the Performance Chemicals segment which includes the Leather Business Unit rose 29% year-on-year to €2.0 billion in 2010, with all seven businesses showing strong volume improvements. The businesses with exposure to the automotive industry showed the largest volume improvements. EBITDA pre exceptionals rose 54% year-on-year to €281 million. The Leather and Functional Chemicals businesses improved earnings the most in 2010. Leather benefited from its exposure to the clothing, furniture and automotive sectors.

Overall EBITDA pre exceptionals nearly doubled to €918 million. Lanxess had forecast about €900 million EBITDA pre exceptionals for 2010. The EBITDA margin pre exceptionals for the full year was 12.9% compared to 9.2% in 2009. Net income rose nearly tenfold to €379 million.
‘Our growth story is set to continue after an outstanding 2010 and an excellent start to 2011,’ said Chief Executive Officer Axel C. Heitmann at the annual press conference in Düsseldorf on March 17. ‘Growth will be driven by our focus on emerging markets and premium products serving the global megatrends of mobility, urbanisation, agriculture and water.’

Global workforce grows
The company’s global workforce rose by 310 to 14,648 at the end of 2010, clearly mirroring the company’s growth strategy. The majority of new employees were hired in the Asia/Pacific region.
As a result of the outstanding performance in 2010, the company’s employees worldwide received a one-off payment of €20 million at the end of the year. The payment was in recognition of the contribution made by the workforce during the crisis year of 2009.

‘GOFOR1.4’
In September 2010, LANXESS set itself the goal to increase EBITDA pre exceptionals to roughly €1.4 billion in 2015 through a dual-track strategy of organic and external growth. The ‘GOFOR1.4’ initiative comprises a large number of projects including a new plant for leather chemicals in Changzhou, China.

Confident outlook
Lanxess is confident about its prospects for 2011. Sales and EBITDA pre exceptionals are expected to be higher than the 2010 results. The global economy and the chemical industry will continue to grow, albeit at a slower rate than in 2010. The emerging markets in Asia/Pacific and Latin America will show the strongest growth rates.
Performance Chemicals will profit from the gradual recovery in the construction industry in Europe and the US as well as the ongoing growth in the automotive sector. The segments will also grow as additional capacities come on stream.
For 2011, the company expects an average exchange rate of US$1.40 per Euro. In addition, it expects higher energy and raw material costs. The potential for setbacks remain in the form of geopolitical unrest and the high levels of national debt of many countries. 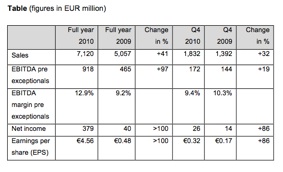